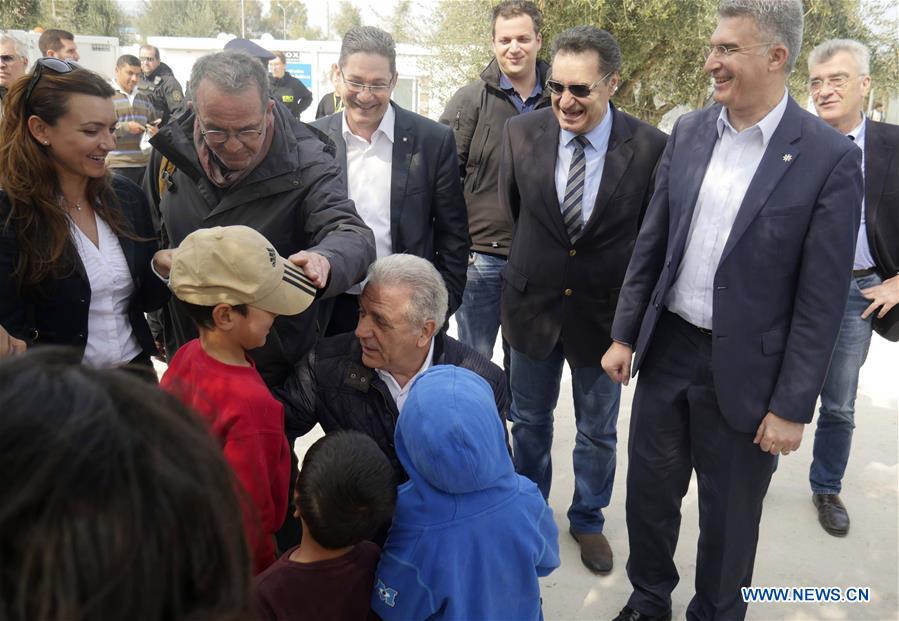 European Commissioner for Migration Dimitris Avramopoulos (C) talks with refugee kids during his visit together with Maltese Home Affairs Minister Carmelo Abela (R front) at a refugee camp in Lesvos, Greece, on March 16, 2017. EU officials on Thursday hailed the progress achieved in dealing with the refugee influx over the past year. (Xinhua/Anthi Pazianou)

LESVOS, Greece, March 16 (Xinhua) -- EU officials on Thursday hailed the progress achieved in dealing with the refugee influx over the past year.

Ahead of the first anniversary of the signing of the EU-Turkey agreement to stem the refugee-migrant flows to Europe, European Commissioner for Migration Dimitris Avramopoulos, Maltese Home Affairs Minister Carmelo Abela and Greek Migration Policy Minister Yannis Mouzalas visited Lesvos island to assess the situation at the frontline.

During a tour at refugee accommodation facilities on the Aegean Sea island, which received half a million people since 2015, officials said no island or state can cope with the crisis alone, calling on the international community to extend more aid.

"Proof of the successful implementation of the EU-Turkey statement is the comparison with the situation until last year. Instead of the about 10,000 migrants a day crossing the Aegean, we now receive on average 40-50 people a day. The number of deaths has sharply decreased," Avramopoulos told media.

"We do not want to go back to Turkey, but continue our journey to Europe," two Afghan women told Abela at the refugee camp of Kara Tepe, which currently hosts about 1,000 refugees and migrants, including 431 Afghans, 200 Syrians and 174 Iraqis.

Following the closure of the Balkan route to central Europe a year ago and the launch of the EU-Turkey deal, about 62,000 people have been stranded in Greece, including 3,418 on Lesvos, according to local police.

Under last year's agreement, all new arrivals must remain on the Aegean Sea islands until their asylum bids are assessed. Those non eligible for asylum are returned to Turkey.

Due to a lack of sufficient asylum service experts and a slow pace of decision-making, it takes up to five months to process each case. As a result, hotspots are overflowing.

The facilities on the islands were built to accommodate about half of the current populace. The situation has improved lately and people have been transferred from tents to upgraded containers, but problems remain, according to Greek and foreign officials.

"Over the past two months, there are 290 prefabricated small homes housing refugee and migrant families," the camp's administrator Stavros Miroyiannis told Xinhua.

Despite the debt crisis, Greece is fulfilling its humanitarian obligations to assist the refugees, Greek President Prokopis Pavlopoulos stressed on Thursday.

His statement came as he welcomed the deputy director general of the International Organization for Migration (IOM) Laura Thompson in Athens. Both officials underlined the need for further support from the international community to the refugees.