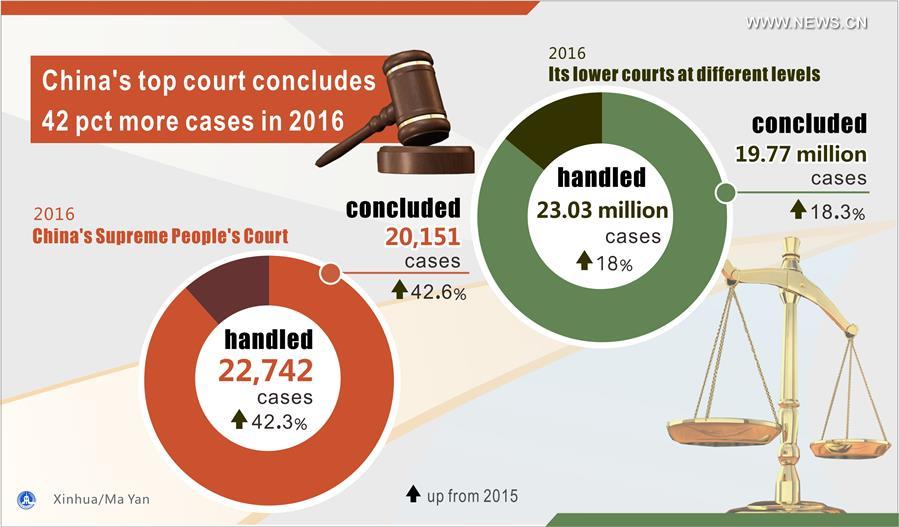 Graphics shows that China's Supreme People's Court (SPC) on Sunday reported a sharp rise in the number of cases it concluded in 2016. (Xinhua/Ma Yan)

BEIJING, March 12 (Xinhua) -- China's Supreme People's Court (SPC) on Sunday reported a sharp rise in the number of cases it concluded in 2016, while promising to play a bigger role this year in helping maintain stability and promote growth.

The SPC handled and concluded 22,742 and 20,151 cases respectively last year, up 42.3 percent and 42.6 percent from 2015, the court said in a work report to be delivered by Chief Justice Zhou Qiang at a plenary meeting of the annual session of the country's top legislature.

Its lower courts at different levels, meanwhile, handled and concluded 23.03 million and 19.77 million cases in 2016, also up 18 percent and 18.3 percent respectively, it said.

In particular, the number of business-related cases concluded by courts at all levels amounted to over 4 million, up 20.3 percent year on year, whereas that of civil cases rose 8.2 percent to some 6.7 million. There were also some 133,000 environment-related cases, it said.

The courts concluded nearly 1.12 million criminal cases -- including 226,000 involving murder, robbery, kidnapping and burglary and 118,000 related to drugs -- but the number of people convicted for criminal offences dropped 1 percent to 1.22 million, the report noted.

About 63,000 people -- including 35 former officials at provincial- and ministerial-level and above -- were implicated in 45,000 graft cases, it continued, with some 2,800 convicted of bribery.

A separate report by the Supreme People's Procuratorate, also available to media shortly before the Sunday morning meeting, said more than 1.4 million were prosecuted last year over criminal charges.