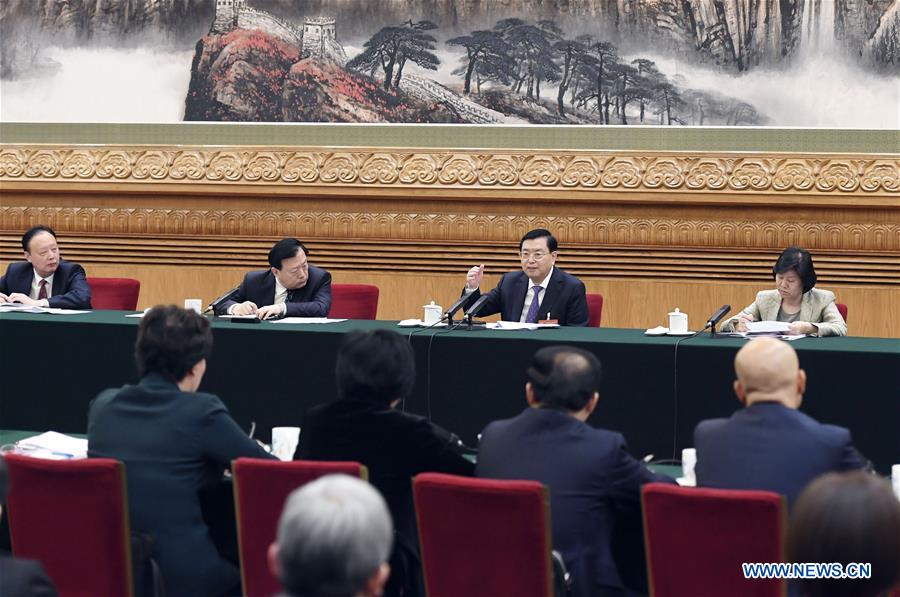 Zhang Dejiang, chairman of the Standing Committee of China's National People's Congress (NPC), joins a panel discussion with deputies to the 12th NPC from Zhejiang Province at the annual session of the NPC in Beijing, capital of China, March 5, 2017. (Xinhua/Gao Jie)

The report was delivered by Premier Li Keqiang at the opening of the annual session of China's top legislature, the National People's Congress (NPC).

Zhang stressed concrete actions to implement the decisions and policies of the CPC Central Committee, promote the steady and healthy development of the economy and the harmony of the society to create a favorable environment for the 19th National Congress of the Party, slated for later this year.

He called for further efforts to conserve energy and protect the environment to provide the people with clean water, fresh air, safe food and beautiful environment.

Liu called for proper understanding of the relations between maintaining stability and seeking progress, stressing efforts to guide social expectations and dissolve risks, while making breakthroughs in reforms.P Major tasks in supply-side structural reform should be accomplished to improve growth quality and efficiency, he added.

Wang stressed the need to explore effective CPC self-supervision for long-term governance, deepen reform of the national supervisory system and establish an anti-graft mechanism under the unified leadership of the Party.

The CPC should enhance supervision over itself and state organs to realize full-coverage oversight of all public servants, he added.