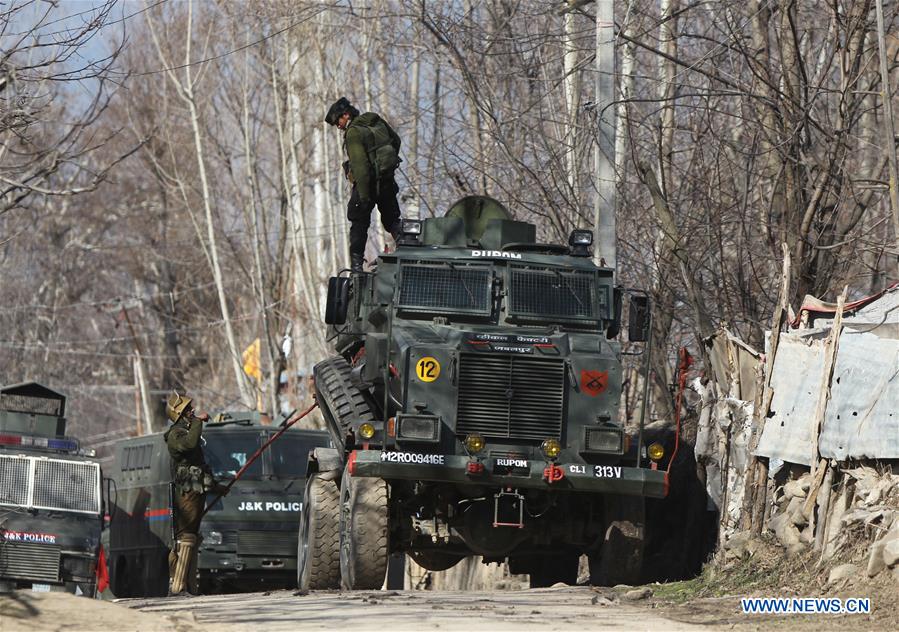 An Indian soldier (R) talks with an Indian policeman near the site of a gunfight at a Tral village in Pulwama district about 42 km south of Srinagar, summer capital of Indian-controlled Kashmir, March 5, 2017. Two militants and an Indian policeman were killed and three others wounded Sunday in a fierce gunfight between militants and Indian troops in restive Indian-controlled Kashmir, officials said. (Xinhua/Javed Dar)

The gunfight erupted on Saturday evening at a Tral village in Pulwama district, about 42 km south of Srinagar city, the summer capital of Indian-controlled Kashmir.

"Two militants were killed in the gunfight at Tral today. One of them is a local Hizb commander, and another is a foreigner," region's Police Chief Shesh Paul Vaid told media in Srinagar. "Unfortunately, we have lost one policemen fighting these militants."

Vaid was attending wreath laying ceremony of the slain policeman at police headquarters in Srinagar.

The gunfight lasted for more than 16 hours.

Locals said the house from where militants were firing on police and army positions was razed to ground due to heavy mortar shelling and improvised explosive device (IED) blasts.

Reports said three government force personnel including an army officer were wounded in the standoff.

The gunfight broke out after contingents of India troops and police encircled a house on the intelligence information suggesting presence of militants in the area.

Meanwhile, police fired dozens of tear smoke shells and warning shots to chase protesters who hit the roads and clashed with government forces. The protesters, mostly young, were throwing rocks and brickbats towards them to protest militant killings. Several people were injured in the clashes, reports said.

Clashes in the area broke out immediately after the gunfight on Saturday evening in a bid to break cordon and help militants to escape. Protesters also snatched a service rifle from a paramilitary trooper near Tral bus terminal.

On Friday evening a similar gunfight broke out in Shopian. However, militants broke the cordon and escaped unhurt from the area. In the morning clashes broke out between locals and government forces. Police fired tear smoke shells and warning shots to chase the irate residents.

Separatist movement and guerilla war challenging New Delhi's rule is going on in Indian-controlled Kashmir since 1989. Gunfight between militants and Indian troops takes place intermittently across the region.

Kashmir, the Himalayan region divided between India and Pakistan, is claimed by both in full. Since their Independence from Britain, the two countries have fought three wars, two exclusively over Kashmir.