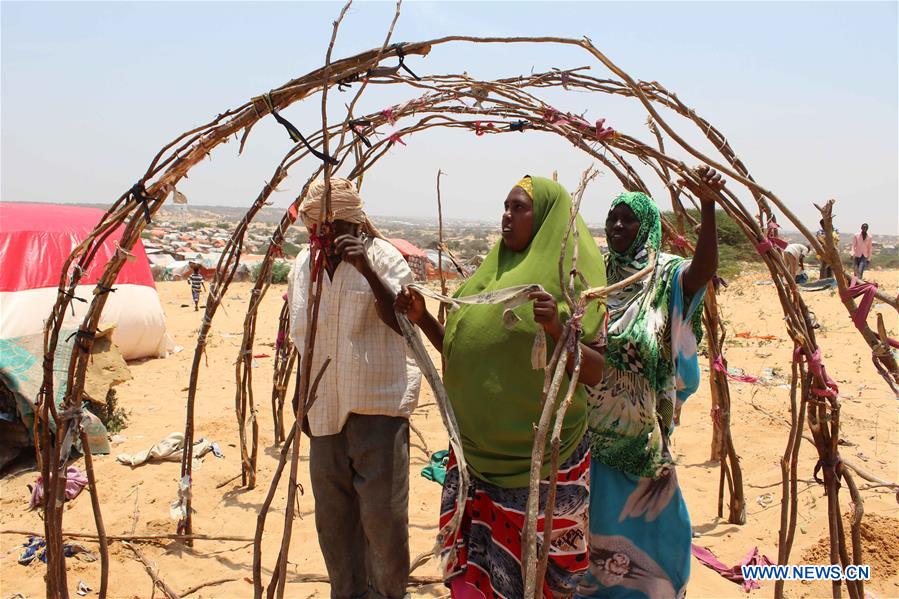 A family build a makeshift house at an Internal Displaced Person camp on the outskirt of Mogadishu, Somalia, March 3, 2017. The International Organization for Migration (IOM) has launched an appeal of 24.6 million U.S. dollars to help more than a million Somalis affected by drought. (Xinhua/Faisal Isse)

MOGADISHU, March 3 (Xinhua) -- The International Organization for Migration (IOM) launched a 24.6-million-U.S.-dollar appeal on Friday to meet the emergency needs of over 1 million Somalis affected by drought.

"A massive increase in humanitarian assistance is urgently needed to avert a famine in some of the worst drought-affected areas of the country," IOM said in a statement issued in Mogadishu.

The agency said the fund would help it scale up lifesaving interventions throughout Somalia where over 6.2 million people are food insecure.

Humanitarian agencies have reported worrying similarities to the 2011 famine in Somalia, when over a quarter of 1 million people lost their lives.

According to IOM, wages are collapsing, local food prices are rising, animal deaths are increasing, malnutrition rates are starting to rise, water prices are spiralling and Somalis are moving in growing numbers in search of food and water.

"Without assistance, many people face malnutrition, significantly increased risk of disease, loss of livelihoods and even death," the statement said.

IOM said its teams are rapidly scaling up interventions in the fields of health, shelter, water and sanitation, protection and food security.

President of Somalia Mohamed Abdullahi Mohamed has acknowledged the devastation of the drought and urged all stakeholders to "respond more effectively" to the famine threat.