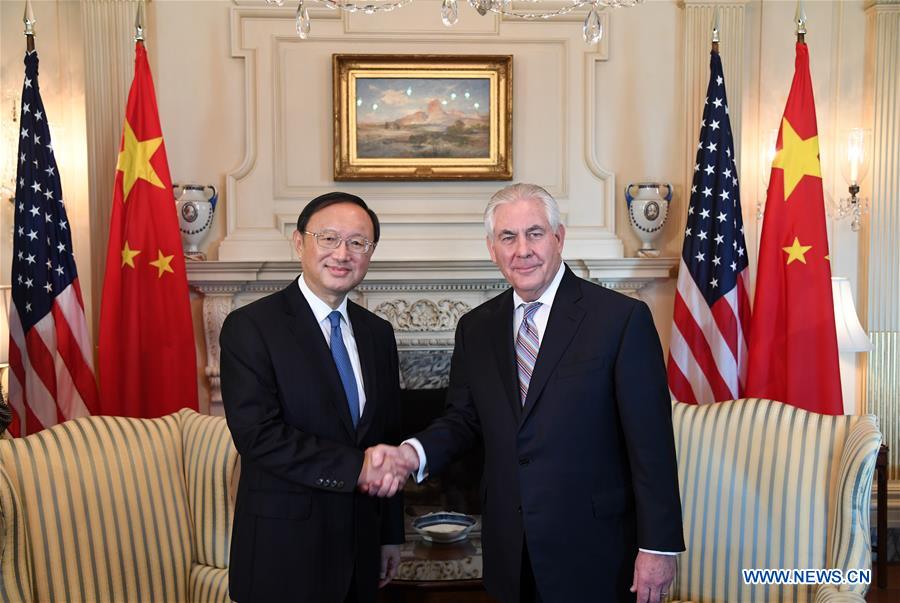 WASHINGTON, Feb. 28 (Xinhua) -- China and the U.S. on Tuesday expressed the willingness to enhance dialogues and exchanges on all levels with an aim to broaden cooperation in regional and global affairs.

The two sides reaffirmed the pledge during a meeting between U.S. Secretary of State Rex Tillerson and visiting Chinese State Councilor Yang Jiechi.

Yang noted that during the phone conversation held not long ago between Chinese President Xi Jinping and his U.S. counterpart Donald Trump, the two sides agreed to make joint efforts to achieve greater results in further developing the China-U.S. ties.

Yang said that, through implementing the consensus reached by the two presidents and upholding the principles of non-conflict, non-confrontation, mutual respect and win-win cooperation, China is willing to work with the U.S. in the next stage to enhance exchanges on all levels from top down, deepen dialogues and mutual cooperation in all areas, broaden communication and coordination on regional and global issues, and respect each other's core interests and major concerns,

This will help promote sustained, steady and healthy development of the China-U.S. relations, which will benefit the peoples of not only both nations but also the whole world, the senior Chinese official added.

For his part, Tillerson said that the two presidents have set a positive tone for the development of the bilateral relations.

The U.S. is willing to work together with China to look at the bilateral ties from a broader angle, strengthen bilateral high-level dialogues and exchanges, continue to expand the scope of cooperation in all areas, and properly handle sensitive issues through consultation and coordination.

Thus, the two sides could ensure smoother development of the bilateral ties and make greater contribution to promoting regional and global peace and prosperity.