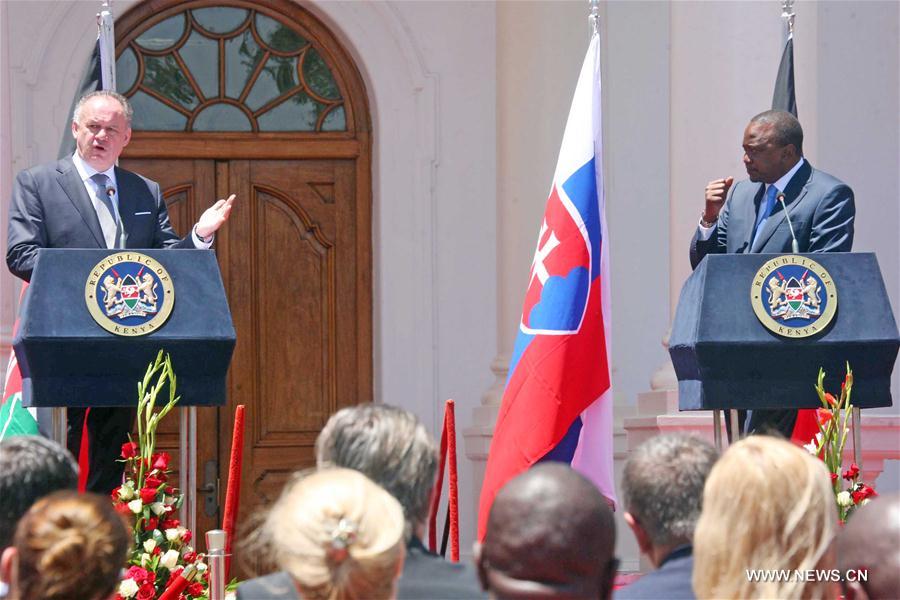 The balance of trade between Kenya and Slovakia is in favour of Slovakia and Kenyatta said Kiska's tour of tea and flower production centres during his visit to the country will boost export of the commodities to the Slovak Republic.

"We view this as an important step in bridging the trade gap between our two countries," he told journalists during a joint news conference in Nairobi after he held bilateral talks with Kiska.

The Slovak Republic is a high-income advanced economy with one of the fastest growth rates in the European Union. The economy has mainly been driven by Foreign Direct Investments (FDI).

Kenyatta said his government has undertaken a wide range of business regulatory reforms aimed at reducing the cost of doing business.

He said the Slovak Republic is also interested in providing scholarships to Kenyans -- especially the underprivileged.

"With these advantages, I think it is clear that Kenya is a natural destination for Slovakia's investment and trade, and I expect that there will be a follow-up meeting with government and the private sectors of both countries to establish new relationships as well as strengthen existing ones," Kenyatta said.

He noted that ties between Kenya and Slovakia go back a long way, saying Kenya was among the first countries to recognize the Republic of Slovakia as a sovereign state following the peaceful dissolution of the former Czechoslovakia.

Speaking during the meeting, the Slovak president said Kenya's position as a gateway to the African market could not be overlooked, saying relations between Kenya and Slovakia are based on mutually beneficial partnership and shared experiences.

President Kiska lauded Kenya's achievement in the mobile banking sector, saying: "Today, it is easier to make mobile payments in Nairobi than in Europe."

The Slovakian leader also commended the role Kenya has continued to play in promoting peace and stability in the region.

During the bilateral talks, the two leaders also discussed peace and security in Somalia, South Sudan and Burundi which are faced with political uncertainty due to increased fighting.

"We are both grateful for the progress made in state building in Somalia, which was recently capped by the election of a new President," Kenyatta said.

He stressed Kenya's committed to the South Sudan peace process through its engagement in the regional frameworks that include IGAD and the African Union (AU).

"But equally, we believe that South Sudan's leaders need to take full responsibility in ensuring the protection of civilians, bringing a complete end to the violence and rebuilding their nation," said Kenyatta.