Celebrations made in Cambodia to welcome Chinese Spring Festival 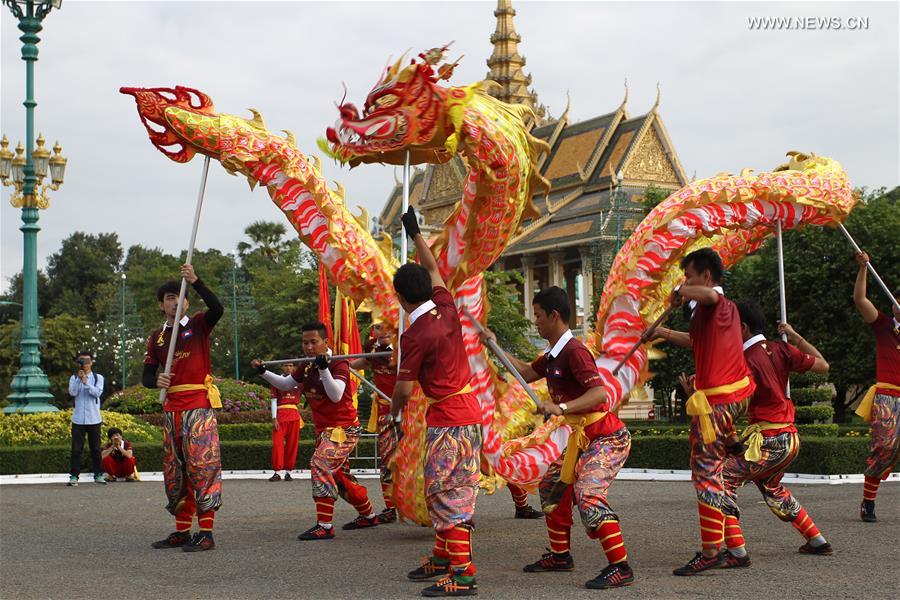 Revelers perform dragon dance at the Royal Palace in Phnom Penh, Cambodia, Jan. 27, 2017. Lion and dragon dances were performed in Cambodia on Friday to greet the Chinese Lunar New Year, or Spring Festival, which falls on Jan. 28 this year. (Xinhua/Sovannara)

PHNOM PENH, Jan. 27 (Xinhua) -- Lion and dragon dances were performed in Cambodia on Friday to greet the Chinese Lunar New Year, or Spring Festival, which falls on Saturday.

Three lion and dragon dance troupes staged at the Royal Palace and the Chinese Embassy in Phnom Penh on Friday morning.

At the Royal Palace, the troupes were welcomed by Cambodian Deputy Prime Minister and Royal Palace Minister Kong Sam Ol, while at the Chinese Embassy, they were greeted by Ambassador Xiong Bo.

"May the Year of the Rooster bring luck, fortune and prosperity to the Chinese people, the Cambodians of Chinese descent, and all Cambodian people," he said.

The ambassador was strongly confident that the Comprehensive Strategic Partnership of Cooperation between China and Cambodia would be further deepened in the New Year, particularly under the framework of the China-proposed Belt and Road Initiative.

Luo Si Xing, vice-president of the Association of Khmer-Chinese in Cambodia, said lion dance was to greet the Spring Festival and to promote Chinese culture and traditions in Cambodia.

Lion dance is usually invited by traditional Chinese families to perform as a symbolic ritual to usher in the Spring Festival and to ward off bad luck and evil spirits.

Chinese New Year is broadly celebrated in this Southeast Asian country, though it is not a public holiday here.

On Monday, Cambodian Prime Minister Samdech Techo Hun Sen sent his greetings to overseas Chinese and Cambodians of Chinese descent on the occasion, blessing them with good luck, fortune and happiness in the New Year.

It is estimated that more than 700,000 Cambodians of Chinese descent are living in Cambodia.