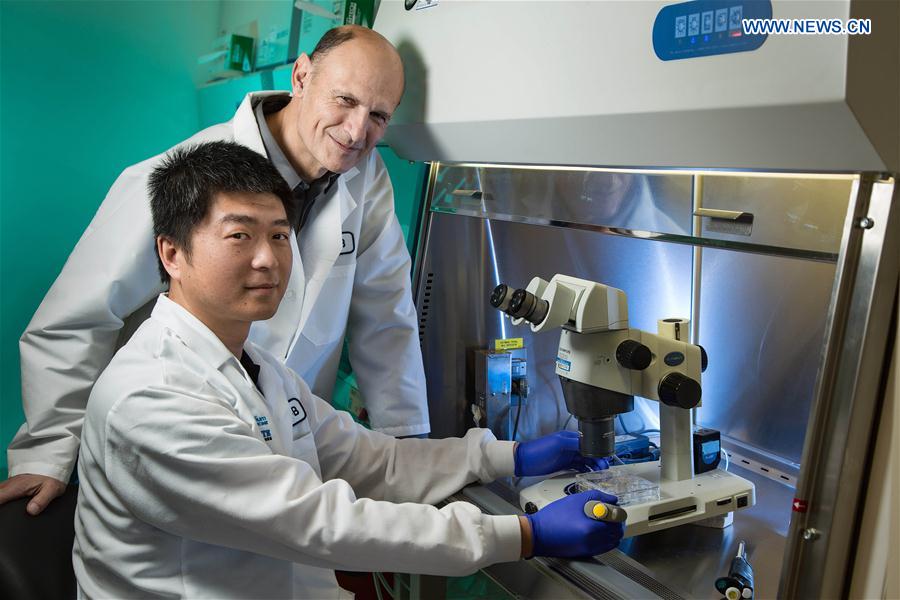 WASHINGTON, Jan. 26 (Xinhua) -- In a bold but potentially controversial quest for solutions for the worldwide shortage of transplant organs, scientists attempting to grow human organs inside pigs have successfully grown the first chimera embryos containing cells from both humans and pigs, they said Thursday.

These embryos were then allowed to develop in sows for three to four weeks before the pig pregnancies are stopped, according to the study published in the U.S. journal Cell.

"In our opinion, this work is very significant and marks a milestone in the stem cell research," first author Jun Wu of the U.S. Salk Institute for Biological Studies told Xinhua. "For the very first time, we demonstrate it's possible to generate human-pig chimeric embryos."

To create the chimeric embryos, Wu and colleagues first used a genome editing tool called CRISPR to delete critical genes for the development of an organ, such as the heart, pancreas or eye in early pig embryos, or blastocysts.

Then, they introduced human pluripotent stem cells into the embryos to see if they would fill the so-called "emptied developmental organ niches". These stem cells, usually taken from skin and blood, can theoretically become any cells in the body.

The study involved a total of 1,500 pig blastocysts, and after the resulting chimera embryos grew between three and four weeks in sows, 186 live embryos containing human cells were harvested.

"We are doing our very best to properly address the ethical concerns," Wu said. "We stopped the pig gestation between 21 and 28 days, which is very early in development."

During this time, he said, "the major organs are starting to form, and we can analyze how the human cells are interacting with resident pig cells and which tissues and organs the human cells can contribute."

These information, he continued, "will greatly help us in future studies to develop strategies to avoid contribution to certain tissues, e.g., the brain and the germ cells."

The researchers injected several different forms of human pluripotent stem cells into pig embryos to see which would survive best and found the cells that survived longest and showed the most potential to continue to develop were the so-called "intermediate" stem cells.

Even using the most well-performing human stem cells, the level of contribution to the chimerized embryo was still low.

"We observed the contribution varied from tissue to tissue and embryo to embryo," said Wu. "In this study we didn't quantify the overall levels of contribution but if I would guess, it's maybe less than one human cell out of 100,000 pig cells."

Wu considered this good news, since one concern with the creation of human and animal chimeras is that the chimera will be too human. For instance, researchers didn't want human cells to contribute to the formation of the brain.

In this study, the human cells did not become precursors of brain cells that can grow into the central nervous system. Rather, they were developing into muscle cells and precursors of other organs.

"So far, we haven't observed any contribution to the pig central nervous system, but this doesn't exclude that possibility," said Wu. "I think it's important to follow the ethical guidelines and proceed this work with a step-by-step approach, to understand the processes during early stages and develop better ways to control human cells."

Japanese researchers were the first in the world to create a rat and mouse chimera in 2010. That chimera was a mouse with pancreatic tissue formed from rat cells.

And on Wednesday, scientists reported having grown mouse pancreases in rats and used them to cure diabetes in mice.

As a first step, Wu and colleagues also created a rat and mouse chimera by introducing rat cells into mouse embryos and letting them mature to generate rat pancreas, heart, eye and other organs in mice.

Rat cells in this study also grew to form a gall bladder in the mouse, even though rats stopped developing this organ themselves over the 18 million years since rats and mice separated evolutionarily.

"This suggests that the reason a rat does not generate a gall bladder is not because it cannot, but because the potential has been hidden by a rat-specific developmental program," said Wu.

The researchers also tried this injection in cows but only cultured cow embryos for two days to evaluate human cell contribution and didn't perform embryo transfer.

"It's more expensive, and we can only transfer a few embryos. In contrast, in pig we can transfer 30 to 50 embryos at a time," said Wu.

In the end, human and animal chimeras might offer insights into early human development and disease onset, provide a realistic drug-testing platform, and ultimately for the generation of transplantable human organs to solve the worldwide shortage of organ donors, the researchers said.

Lead investigator Juan Carlos Izpisua Belmonte, professor of the Salk Institute, called their study "an important first step" and noted that it's still "far away from" the ultimate goal of growing grow functional and transplantable tissue or organs for regenerative medicine.

"At this point, we wanted to know whether human cells can contribute at all to address the 'yes or no' question," Izpisua Belmonte said in a statement. "Now that we know the answer is yes, our next challenge is to improve efficiency and guide the human cells into forming a particular organ in pigs."

Professor Bruce Whitelaw, interim director of the Roslin Institute at the University of Edinburgh, noted that it's difficult to create the human-pig chimera embryos.

"This is the first scientific publication to achieve this result," said Whitelaw, who was not involved in the study, "(It) paves the way for significant advances in our understanding of cell lineage development in the embryo and hints towards future novel biotech applications."