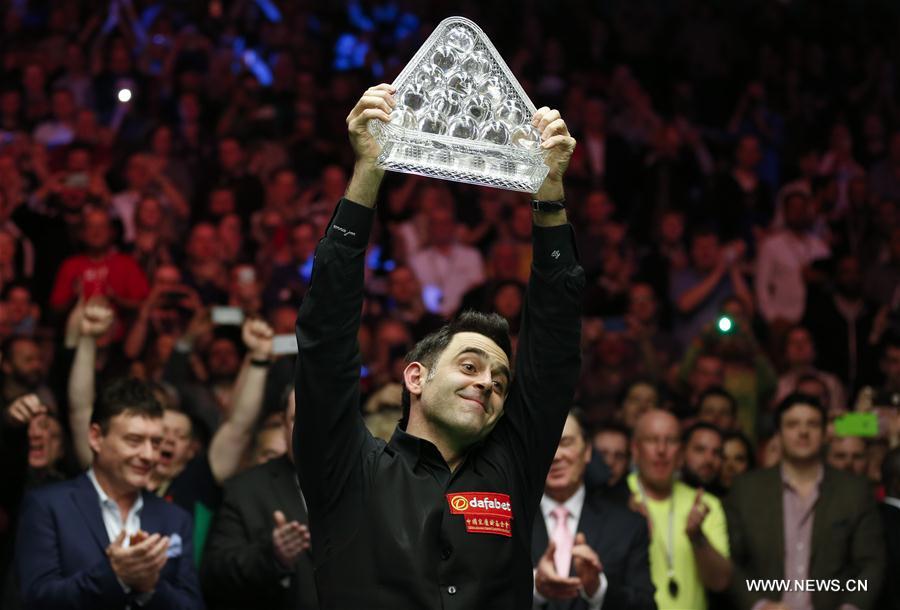 Ronnie O'Sullivan of England celebrates with the trophy after the final match with Joe Perry of England at Snooker Masters 2017 at the Alexandra Palace in London, Britain on Jan. 22, 2017. Ronnie O'Sullivan claimed the title by winning 10-7. (Xinhua/Han Yan)

LONDON, Jan. 22 (Xinhua) -- Ronnie O'Sullivan fought back from behind to beat Joe Perry 10-7 here on Sunday to become the first player to win the Masters snooker tournament seven times.

The "Rocket" beat Stephen Hendry's record to lift the trophy for the seventh time and receive a check for 200,000 pounds of prize money.

O'Sullivan, ranked 13th in the world, won his first piece of silverware since the Welsh Open last February, having lost in the finals of the European Masters, the Champion of Champions and the UK Championship this season.

The 41-year-old, who has also won the world championship five times, trailed 4-1 at one point, but won seven frames in a row to take an 8-4 lead.

Perry, 42, who had only won one match in his previous eight appearances, took the next two frames to make it 8-6, helped by breaks of 117 and 92. But when all was said and done, O'Sullivan sealed victory to defend his title.

"Joe played a brilliant tournament, a really good match and he should've beaten me. I got lucky - I stole it," O'Sullivan said after the tournament.

"It is great to get some records, I still have the World Championship one to get. When I was younger I was just happy to win one, so to win seven, someone up there is looking after me," he added.