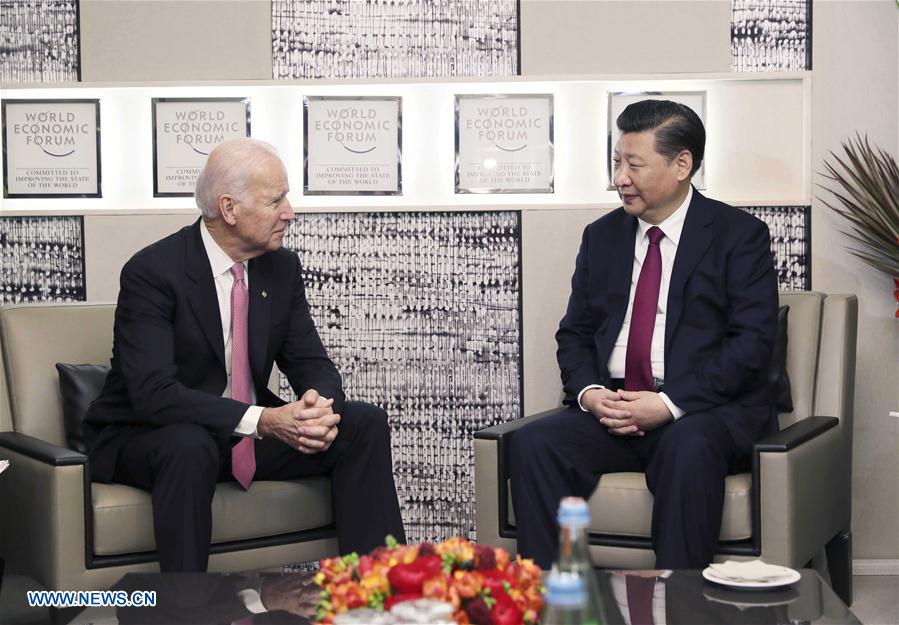 DAVOS, Switzerland, Jan. 17 (Xinhua) -- Chinese President Xi Jinping on Tuesday called for joint efforts by China and the United States in building a long-term, stable and cooperative relationship to meet the interests of both countries and the world.

He spoke positively of Biden's contributions to promoting China-U.S. relations as well as the mutual understanding and friendship between peoples of the two countries.

China-U.S. relations have been developing in the right direction and have achieved positive outcomes with the joint efforts of the two sides, especially since he and Obama reached consensus on building a new type of major country relationship between the two countries over three years ago, Xi said.

The stock of bilateral trade and mutual investment as well as personnel exchanges have hit a record high, he said.

Biden congratulated Xi on his important and wonderful speech delivered at the opening session of the World Economic Forum's annual meeting.

He conveyed Obama's cordial greetings to President Xi and thanked Xi for his positive efforts in advancing U.S.-China ties.

Marking U.S.-China relations as a very important bilateral relationship, Biden said the growth and prosperity of the United States and China are both of crucial importance to the world in the 21st century.

The United States hopes that the two nations could continue to deepen mutual trust and expand cooperation, said Biden.