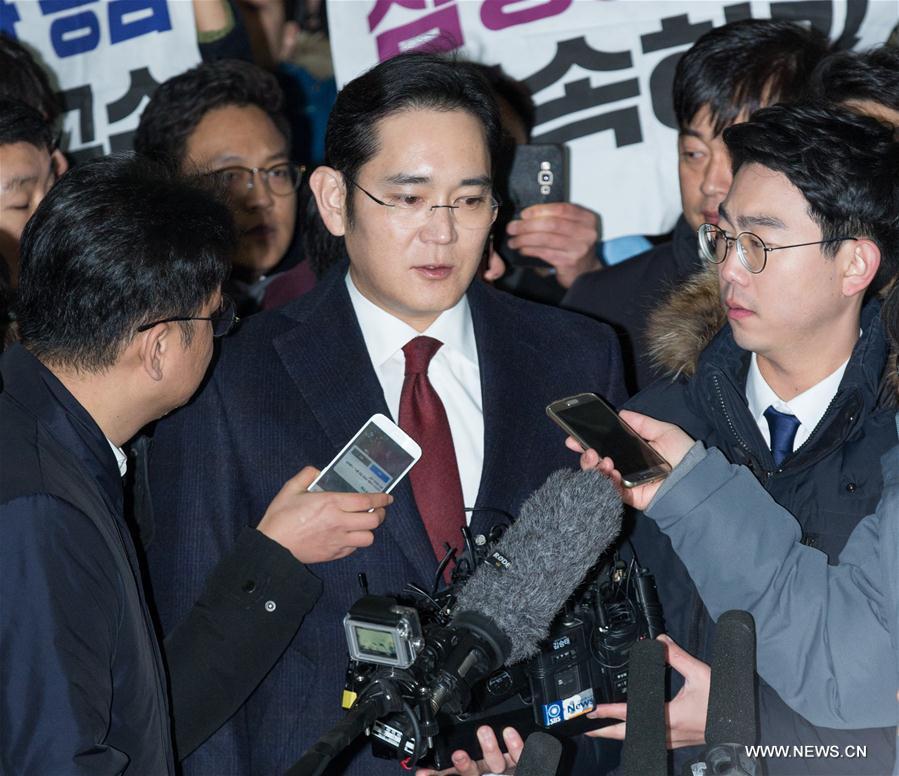 Samsung Electronics Vice Chairman Lee Jae-yong got out of a black sedan at around 9:30 a.m. local time Thursday outside the special prosecutor's office, telling reporters that he felt "very sorry to people" for this matter, local TV footage showed.

The Samsung heir apparent with a stiff look, surrounded by a crowd of journalists, didn't answer any questions and bowed his head before going inside the office.

Outside the office, civic group activists shouted for the imprisonment of chaebol heads, raising high the photos of other conglomerate chairmen, including Lee.

It marks the first time in about nine years that the de facto Samsung chief is questioned by a special prosecutor.

Lee, then executive director, was interrogated by a separate independent counsel in February 2008 for his alleged involvement in the illegal transfer of management control by floating convertible bonds of then de facto holding company at a much cheaper price for him.

He was acquitted, but his father Chairman Lee Kun-hee was sentenced to a suspended three-year prison term for tax evasion and embezzlement. The elder Lee was eventually pardoned four months later.

This time around, Vice Chairman Lee stood in front of journalists, before being quizzed as a suspect for a bribery charge related to the July 2015 merger of two Samsung affiliates to create a de facto holding company that will let the heir apparent inherit the group's overall control from his ailing father.

Chairman Lee has been hospitalized for heart attack since May 2014. The younger Lee has steered the Samsung empire, of which businesses range from electronic products to construction, finance and shipbuilding.

Samsung is suspected of having provided financial assistance to foundations and a company company controlled by Park's longtime confidante, Choi Soon-sil, at the center of the influence-peddling scandal, in return for getting support from the national pension fund in the 2015 merger.

The merger between Samsung C&T, a construction unit, and Cheil Industries, a former de facto holding company, was controversial as foreign shareholders, led by the U.S.-based hedge fund Elliott Management, opposed it for an unfair exchange ratio.

The National Pension Service (NPS), then the biggest shareholder of Samsung C&T, backed the controversial merger despite pessimistic assessment from outside advisory groups. NPS chief Moon Hyung-pyo has been in custody as he acknowledged his pressure of the NPS on voting for the merger while he was the health and welfare minister.

Samsung made the biggest donations among scores of conglomerates to two Choi-controlled foundations, while signing tens of millions of U.S. dollars of contract with a German company, owned by Choi and her daughter, to provide financial assistance for the daughter's equestrian training.

In addition, Samsung offered millions of dollars to a winter sports center managed by Choi's niece.

President Park and Vice Chairman Lee met face-to-face around the time of the Samsung merger.

Lee denied bribery accusations at the December parliamentary hearing last year, but the independent counsel team asked the National Assembly's special committee to file a complaint against the vice chairman for a false testimony.

The independent counsel's investigation into the Samsung merger would be the key to filing a bribery charge against the impeached president. President Park is waiting for the constitutional court's ruling on the impeachment bill that was passed in the parliament on Dec. 9 last year.

The team's spokesman told a press briefing on Wednesday that Samsung Electronics Vice Chairman Lee Jae-yong will be summoned at 9:30 a.m. local time on Thursday for questioning.  Full story

Choi has been charged with extorting 77.4 billion won (about 70 million U.S. dollars) from 53 conglomerates, including Samsung, to set up two non-profit foundations she actually controls.  Full story

SEOUL, Nov. 22 (Xinhua) -- Suspicion is growing over a secret link between Samsung Group, South Korea's biggest family-run conglomerate, and President Park Geun-hye's longtime confidante Choi Soon-sil who has been indicted for criminal acts in conspiracy with the embattled president.

Choi was charged by prosecutors on Sunday with multiple counts including abuse of power and extortion. Park was identified as an accomplice to Choi, becoming the first sitting president of South Korea to be investigated as a suspect.  Full story