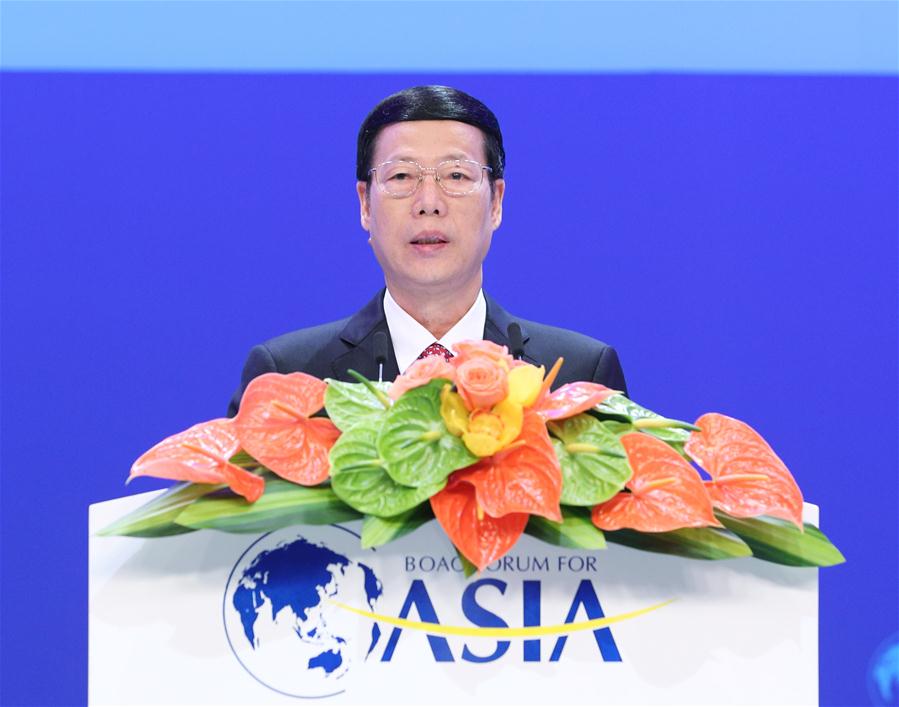 BOAO, Hainan, March 27 (Xinhua) -- Following is an English version of the full text of the keynote speech by Chinese Vice Premier Zhang Gaoli at the opening plenary of the Boao Forum for Asia Annual Conference 2017 on March 25:

Welcome to beautiful Hainan to attend the Boao Forum for Asia Annual Conference 2017. President Xi Jinping attaches great importance to this annual conference and has sent a letter of congratulations. Here, on behalf of the Chinese government, I wish to extend warm welcome to all the distinguished guests attending the conference.

The theme of this year's annual conference, "Globalization and Free Trade: the Asian Perspectives", conforms to the trend of the times and answers the calls of the parties concerned. It is well targeted and highly relevant to the current situation. I hope that the participants will seek new inspirations through in-depth discussion on the theme of the conference, build consensus on economic globalization and free trade, and make positive contribution to stability, development and prosperity of Asia and the world.

- Through economic globalization, Asian countries have realized leapfrog development and created the "Asian miracle". After the end of the Second World War, the newly independent Asian countries seized the opportunities brought by economic globalization and implemented the strategy of trade for growth and economic catch-up. Building on their comparative advantages, they have taken an active part in international division of labor and regional cooperation and embarked on a fast track of economic development. Many Asian countries have registered sustained high-speed growth. As a result, today's Asia has grown into the most vibrant and promising region in the world.

- Through economic globalization, Asian countries have provided driving force for global growth and offered the "Asian opportunities". In particular, since the outbreak of the international financial crisis, Asia has served as a major engine for the recovery and growth of the world economy, contributing to nearly half of global growth. In recent years, Asian countries have been active in conducting outbound investment and international economic cooperation. The large population and growing middle-income groups in Asian countries have provided a huge consumption and investment market. Countries in the world are all turning their eyes to the east, hoping to take the ride of Asia's development and seize the opportunities it presents.

- Through economic globalization, Asian countries have found a path of modernization with Asian features and accumulated the "Asian experience". In line with their realities and development stages, Asian countries have integrated into economic globalization through their own ways, means and pace. While embracing modern industrial civilization, countries in Asia have maintained the Asian traditions and national characters, and moved up from the lower end to the middle and higher ends in the global industrial, supply and value chains. Following the Five Principles of Peaceful Coexistence, we have strengthened cooperation and exchanges in all fields. Combining market rules and government regulations, we have maintained sound and steady economic performance. We have steadily advanced regional cooperation in keeping with the principles of openness and inclusiveness, and created a diversified and dynamic Asia. In particular, when confronted with the impact of the Asian financial crisis and international financial crisis, we have extended mutual assistance in the spirit of unity and worked together to bring Asia back to the path of prosperity.

These important views shared by President Xi Jinping have pointed the way for overcoming the difficulties and challenges facing the world economy and promoting the prosperity and progress of human society. In pursuing development and reform, we need to keep up with the changes in the world, follow the trend of the times, and promote Asian experience and vision. We need to work together to advance economic globalization and free trade and jointly create a community of shared future for Asia and mankind.

First, we should all be committed to peaceful development. Without a peaceful environment, economic globalization cannot be realized. All countries should keep to the path of peaceful development, foster and practice a vision of common, comprehensive, cooperative and sustainable security, and jointly maintain a peaceful and stable environment for development. Major countries shoulder primary responsibilities for maintaining world peace. They should step up strategic communication, increase strategic mutual trust, respect each other's core interests and major concerns, play a constructive role in international and regional affairs, and refrain from pursuing selfish interest at the cost of regional stability and strategic balance. To address regional tensions and differences, the parties concerned should stick to peaceful settlement of disputes through dialogue and consultation. It is important to step up cooperation in the non-traditional security fields, and jointly tackle global challenges such as terrorism, climate change, refugees and natural disasters.

Second, we should vigorously promote innovation-driven development. Innovation is the primary driving force for global growth. The G20 Hangzhou Summit adopted the Blueprint on Innovative Growth and formulated specific action plan, which is crucial for reinvigorating global growth. In line with the consensus of the Hangzhou Summit, we should stimulate and drive growth through innovation and reform to build an innovative world economy. It is important to promote innovation in macro-economic policies, introduce an effective package of fiscal, monetary and structural reform policies, and address both symptoms and root causes with a multi-pronged strategy. We should be determined to push for the adjustment of economic structure and shift in growth model, in order to create more space and momentum for growth. It is important to seize the opportunities brought by the new round of scientific, technological and industrial revolution, employ new technologies, develop new economy, cultivate new driving forces, and foster new industries, new models and new businesses to unleash social creativity and market dynamism.

Third, we should lead the way toward open development. We should advocate the philosophy of open development, build an open world economy, and promote shared benefits and integrated interests in building value chains and markets. We should reenergize trade and investment as the engines of growth, firmly uphold the multilateral free trade regime represented by the WTO, make free trade arrangements more open and inclusive and build networks of economic cooperation and free trade oriented to the whole world. This year marks the 50th anniversary of the establishment of ASEAN, and the 20th anniversary of the ASEAN Plus Three (China, Japan and the ROK) cooperation mechanism. Regional cooperation in East Asia now stands at a new historical starting point. We should continue to deepen China-ASEAN cooperation, ASEAN Plus Three cooperation, Lancang-Mekong cooperation, East Asia Summit (EAS), Asian Cooperation Dialogue (ACD) and other regional cooperation processes. We should work for the full and effective implementation of the protocol for the upgrade of China-ASEAN FTA, conclude negotiations on the Regional Comprehensive Economic Partnership (RCEP) at an early date, and push for the building of the Free Trade Area of the Asia-Pacific (FTAAP) to lay a solid foundation for a community of shared future in Asia.