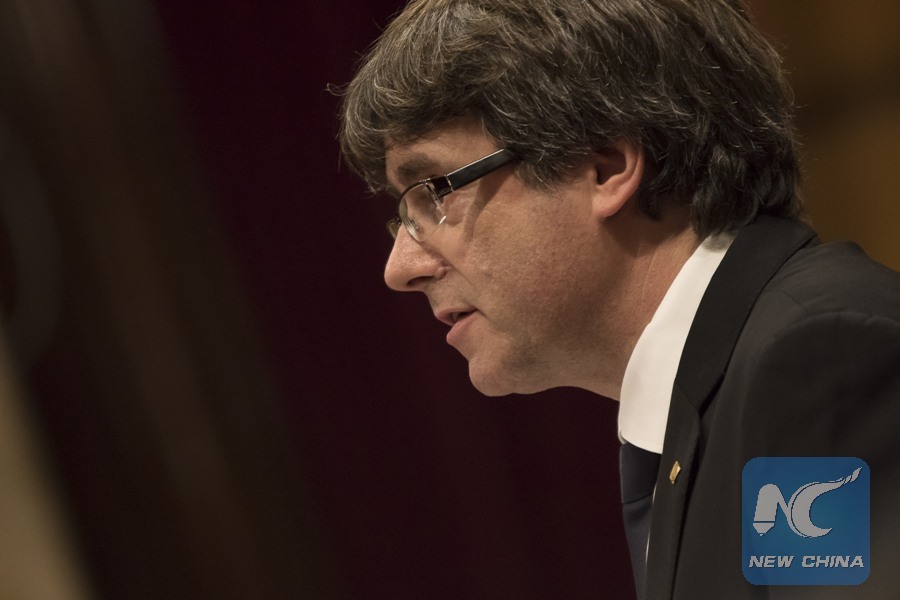 MADRID, Oct. 29 (Xinhua) -- Hundreds of thousands of people took to the streets on Sunday in Spain's northeastern city of Barcelona in a huge pro-Spain rally, two days after the Catalan regional parliament voted to declare independence.

Protesters carried Catalan, Spanish and European flags in support of Spain. They also shouted slogans such as "Puigdemont to prison", and "no amnesty, no forgiveness", among others.

Former Catalan leader Carles Puigdemont, along with his government, was dismissed on Friday by Spanish Prime Minister Mariano Rajoy, who also called new elections in the region on Dec. 21.

The Spanish State Prosecutor is reportedly expected to consider presenting accusations of "rebellion" against Puigdemont on Monday, with charges which could lead to a jail term of 15 to 30 years.

The demonstration was organized by the association Societat Civil Catalana, which claimed that there were 1.3 million people on the streets.

The representative of the Spanish central government in Catalonia said around 1 million people joined the rally. Barcelona police put the number at some 300,000.

The Spanish government on Saturday officially took control of Catalonia's regional government, Generalitat, with Rajoy taking control of the functions of the president of Generalitat.

Rajoy has delegated these duties on Deputy Prime Minister, Soraya Saenz de Santamaria, who is also in charge of the Catalan vice-presidency.

The Spanish government sacked the chief of the police force of Catalonia, Josep Lluis Trapero, who accepted the decision, and appointed Ferran Lopez as the new chief.

These moves followed the decision taken by the Catalan parliament on Friday to unilaterally declare independence of the region in the northeast of Spain.

Catalonia held a referendum on self-determination on Oct. 1, which had been declared illegal by the Spanish Constitutional Court.

The application of Article 155 of the Spanish Constitution, which suspends the autonomy of the Catalan region and hands control of key Catalan institutions to Madrid, was approved by the Spanish Senate Friday afternoon.