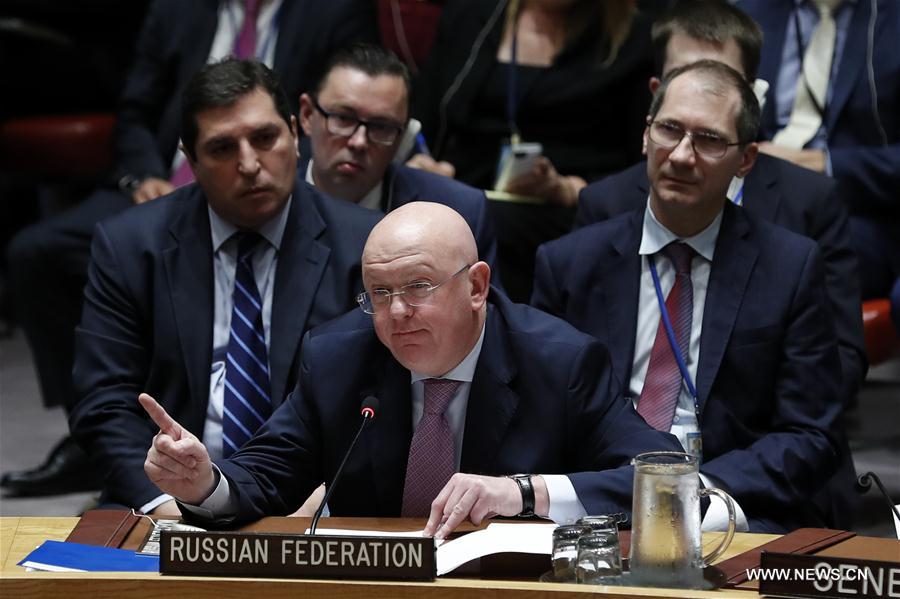 UNITED NATIONS, Oct. 24 (Xinhua) -- Russia on Tuesday vetoed a UN Security Council draft resolution on the extension of the mandate of an independent investigation mechanism, which was tasked to determine who was responsible for the use of chemical weapons in Syria.

The draft resolution sponsored by the United States sought to extend the mandate of the Joint Investigative Mechanism (JIM) of the United Nations and the Organization for the Prohibition of Chemical Weapons for another year.

Prior to the vote, Russian ambassador to the United Nations Vasilly Nebenzia proposed a postponement till Nov. 7, arguing that the extension of JIM's mandate should be discussed after the publication of its report, which is only two days away. He told the council that a hasty vote was intended to "dishonor" Russia.

British ambassador Matthew Rycroft repudiated the Russian position, saying that a vote on Tuesday was intended to de-link the JIM report and the extension of its mandate, thus avoiding the "politicization" of the issue.

U.S. deputy permanent representative to the United Nations, Michele Sison, also rejected the Russian proposal, saying that there was no time to waste. "It's not every day that this council considers an issue that is so horrific and so shocking to the conscience as the use of chemical weapons against civilians. We need to keep this important work of the JIM on track."

Russia's proposal was put to vote and was rejected by the Security Council 8-4 with three abstentions, giving the green light for a vote on the draft resolution on JIM.

After the Russian veto, the U.S. and British representatives attacked Russia and asked to preserve JIM.

"The United States deeply regrets that one member of this council vetoed against this text, putting political considerations over the misery of Syrian civilians who have suffered and died from the use of chemical weapons. The reasons offered fool no one this morning," Sison told the council after the vote.

She defended JIM and questioned Russia's motive of criticizing the investigators. "The question we must ask ourselves is whether the JIM is being attacked because it has failed in its job to determine the truth in Syria or because its conclusions have been politically inconvenient for some council members," she said.

Rycroft of Britain noted that it was Russia that initiated JIM. He accused Russia of abusing its veto power to side with Syria, which he said has no regard for international norms.

"Why has Russia alone stopped an investigation whose work is not yet complete? Why has Russia brought an end to a mechanism that they initiated and we all created and mandated when there are still questions to answer?" he asked.

Nebenzia defended Russian position and explained that the Russian veto did not mean an end to JIM. "We will return to this matter ... (we) will examine what the mandate of JIM should be so that it fulfils its work in a professional, objective and impartial way," he told the Security Council after his veto.

He said Tuesday's vote was "senseless" and was intended to embarrass Russia. He regretted that "others chose the path of confrontation and division within the Security Council," referring to the rejection of his proposal for a postponement.

He promised that his country's veto has no influence on the fate of JIM.

Wu Haitao, the charge d'affaires at the Chinese permanent mission to the United Nations, said China, which abstained from the vote, is opposed to the use of chemical weapons and supports JIM.

The draft resolution contains positive elements, but also issues of concern by certain members of the council. The council could have continued consultation so that the text wins unanimous support, he said.

"regretably, however, the council rushed to vote on the draft resolution in the absence of consensus," he said, noting that the practice is not conducive to unity of the Security Council.

The Security Council unanimously approved JIM in 2015 and renewed its mandate for another year in 2016. Its mandate expires on Nov. 17, 2017.