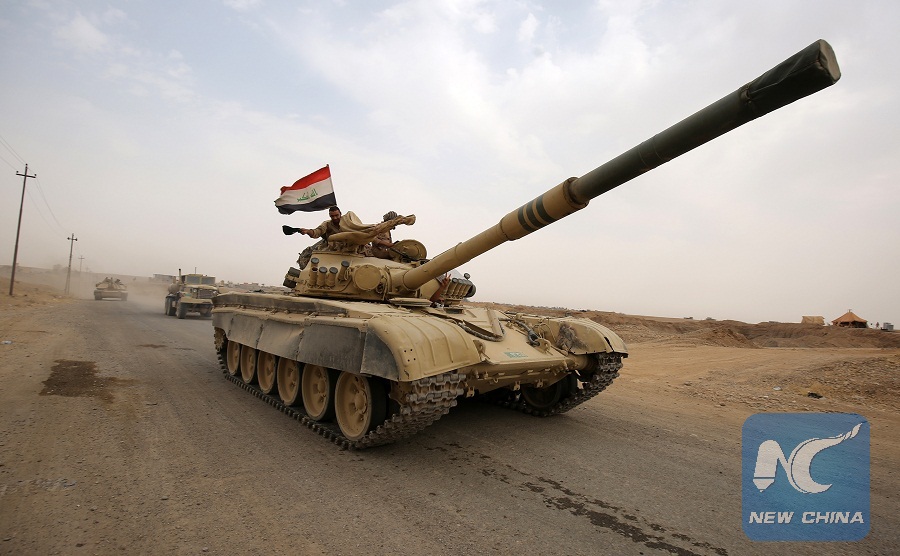 (File) Iraqi security forces on Monday fully recaptured the city of Kirkuk after the Kurdish forces withdrew from the city. (Xinhua Photo)

KIRKUK, Iraq, Oct. 16 (Xinhua) -- Iraqi security forces on Monday fully recaptured the city of Kirkuk and took control of the government building after the Kurdish forces withdrew from the city, a local security source told Xinhua.

The Counter-Terrorism Service (CTS), Iraqi army, federal police and the paramilitary Hashd Shaabi brigades swept the city of Kirkuk, some 250 km north of Baghdad, and took control of provincial government building in the central of the city, the source said on condition of anonymity.

The Iraqi forces deployed in the main streets of the city and seized the other government buildings after the Kurdish Peshmerga forces and thousands of militants affiliated with the leading Kurdish parties withdrew from the streets, the source said.

A statement by the General Command of the Peshmerga forces said "the redeployment of federal forces in Kirkuk is an attack on the province and a flagrant declaration of war on the people of Kurdistan."

The statement accused officials from the Patriotic Union of Kurdistan (PUK), which was headed by the late Iraqi President Jalal Talabani, of collaborating in a historic conspiracy against the region of Kurdistan.

"Those (Peshmerga) leaders withdrew from some of the sensitive positions in front of the Hashd Shaabi forces without confrontation and left (the Peshmerga leader) Kosrat Rasoul alone," the Peshmerga command said.

However, a statement by the PUK leaders denied the accusations saying they were outnumbered overnight when large Iraqi forces with some 350 tanks and armored vehicles attacked their posts in Taza area in south of Kirkuk and they fought for four hours but the battle was not balanced and were forced to withdraw.

On Monday afternoon, the Iraqi Prime Minister Haider al-Abadi, who is also the Commander-in-Chief of Iraqi forces, ordered the troops to raise the Iraqi flag in all the disputed areas, including Kirkuk, Abadi's office said in a statement.

Also in the day, Abadi issued a statement to reassure the people of the Kurdish region and the residents of Kirkuk province that the federal government is keen on their safety and interest.

"We assure our people in Kurdistan and in particular in Kirkuk that we are keen on their safety and interest. We have only fulfilled our constitutional duty to extend the federal authority and impose security and protect the national wealth in this city," Abadi said in a statement by his office.

"We call upon the Peshmerga forces to perform their duty under the federal leadership as part of the Iraqi armed forces," Abadi said.

"It's my duty to act in accordance with the constitution to serve the citizens and protect the unity of the country, which was at risk of partition as a result of the insistence on holding a referendum by the controllers of the Kurdistan region unilaterally," Abadi added.

Earlier in the day, Abadi ordered government forces to enter the oil-rich Kirkuk province in northern Iraq to regain control of the disputed areas claimed between Baghdad and the Kurdish semi-autonomous region.

The Iraqi forces pushed into Kirkuk province and recaptured the headquarters of the government-owned North Oil Company and the nearby huge oil and gas field, known as Baba Gurgur, in addition to several towns and many oil installations and military bases, including the major airbase of al-Hurriyah, also known as K1 near Kirkuk.

The Kurds also withdrew from other disputed areas outside Kirkuk province, such as the city of Tuz-Khurmato in Salahudin province and the cities of Qara-Tappa, Jalawlaa and Jabbara in Iraq's eastern province of Diyala.

Disagreements between Baghdad and the Kurdish regional government have been running high for years. The ethnic Kurds consider the northern Kirkuk province and parts of Nineveh, Diyala and Salahudin provinces as disputed areas and want them to be incorporated into their region, a move fiercely opposed by the Arabs and Turkomans and by the central government in Baghdad.

The disputed areas are mostly under the control of Peshmerga, but in small areas like the city of Tuz-Khurmato, there is a mixed presence of federal forces and the Peshmerga.

Tensions are escalating between Baghdad and the region of Kurdistan after the Kurds held a controversial referendum on the independence of the Kurdistan region and the disputed areas.

The independence of Kurdistan is opposed not only by the Iraqi central government, but also by most other countries as it would threaten the integrity of Iraq and undermine the fight against IS militants.

Iraq's neighboring countries, especially Turkey, Iran and Syria, fear that the Iraqi Kurds' pursuit of independence threatens their territorial integrity, as a large Kurdish population lives in those countries.