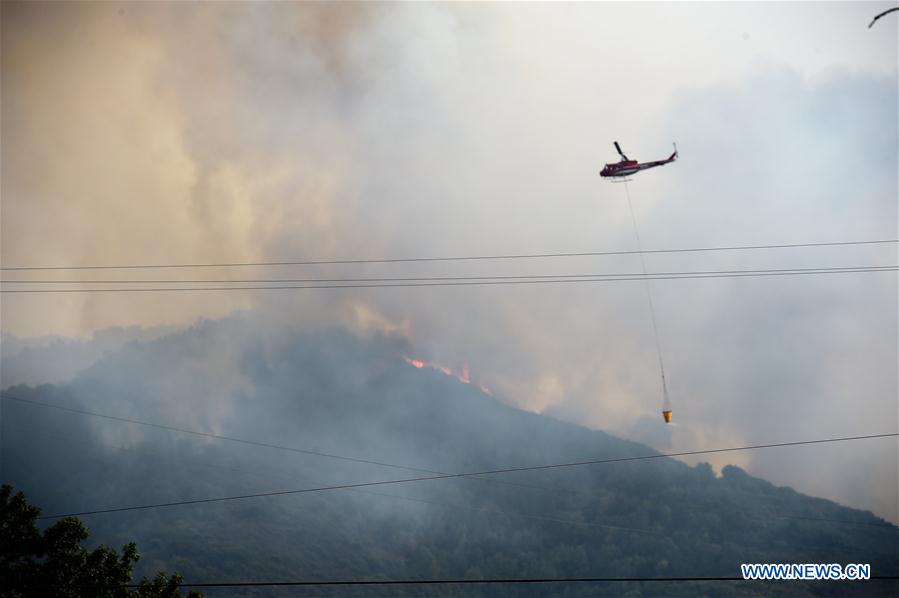 A helicopter tries to put out the wildfire in California's Napa, the United States, on Oct. 10, 2017. The death toll has risen to 15 in north California wildfires as more casualties were confirmed Tuesday in several counties near San Francisco in western California in west United States. (Xinhua/Wu Xiaoling)

SAN FRANCISCO, Oct. 10 (Xinhua) -- The death toll has risen to 15 in north California wildfires as more casualties were confirmed Tuesday in several counties near San Francisco in western California in west United States.

Sonama County sheriff's office said a total of nine deaths were reported after two more fatalities were confirmed in the county, about 90 kilometers north of San Francisco.

The death toll also includes two in Napa County, three in Mendocino County and one in Yuba County.

Over 200 people had been reported missing in Sonoma County, but 45 of those people have been found, officials said.

The local KRON4 TV station showed thousands of structures, including business facilities, hospitals and homes, were burned to the ground in flames.

More than 3,000 people remain in shelters as 17 wildfires have burned through 115,000 acres (465 squre milomiters) of land across California.

Wildfires statewide have left at least 2,000 structures destroyed, officials from California Office of Emergency Services said at a press conference.

Tens of thousands of households are without power in Sonoma County, one of the hardest hit in the most damaging wildfires in the modern history of California.

Pacific Gas and Electric Company is working to restore power to 50,260 customers impacted by the wildfires in the County.

About 28,000 customers have no access to gas service in Santa Rosa, Windsor, Yountville, Napa, and Kenwood, said Shirlee Zane, chair of the Sonoma County Board of Supervisors.

The deadly fires in North Bay of California have caused serious damage to the state, and thousands of people were forced to be evacuated, with a large number of homes and commercial facilities, including hospitals and even parks, completely destroyed.