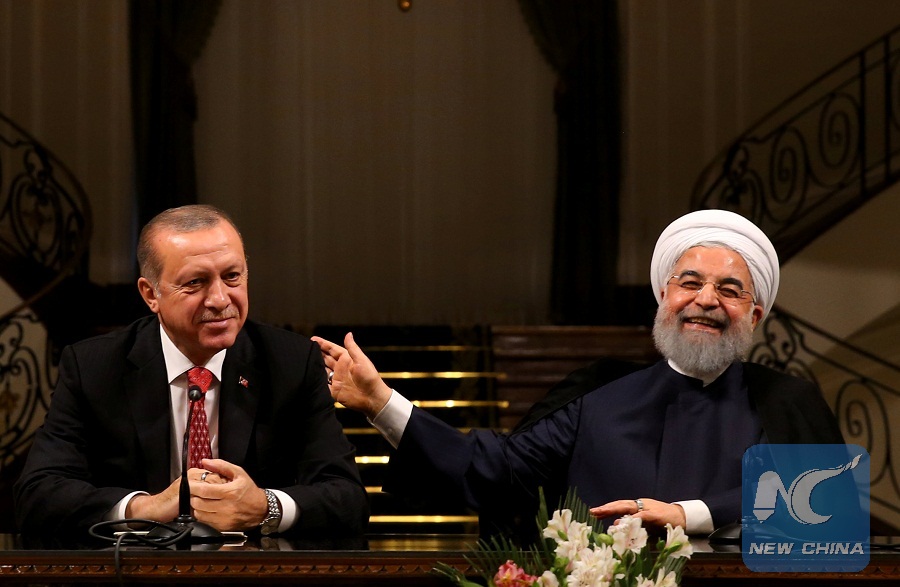 ANKARA, Oct. 4 (Xinhua) -- Turkey and Iran have come closer to each other by sharing common concerns over regional crises once pulling the two neighbors apart.

Untill last year, Turkey was slamming Iran for its "Persian expansionism" and "sectarian policies." After ups and downs in relations over the Syrian crisis since 2011, both are narrowing differences on the key issue.

Turkish President Recep Tayyip Erdogan led an extended delegation for a visit to Tehran on Wednesday, where he is expected to meet his Iranian counterpart Hassan Rouhani and supreme leader Ayatollah Ali Khamenei. Ministers of the two neighbors will also hold the fourth Turkey-Iran High Level Strategic Council meeting to enhance bilateral ties.

The two countries, which enjoy a trade volume of about 11 billion U.S. dollars per year, aim to raise the figure to 30 billion in the future.

Possible topics on the agenda include the recent developments in Iraq, anti-terrorism, as well as cooperation in transport, energy and border crossings, according to Turkish Foreign Minister Mevlut Cavusoglu.

Turkey is sincere in voicing opposition to Iran's some policies, particularly in Syria, Iraq, and Gulf region, Cavusoglu said.

"But on the other hand, Iran is our neighbor. We criticize Iran's mistakes, but if it's right, we support Iran. It's a wrong idea to fully stalemate Iran," he added.

Turkey, a country with a Sunni majority, and Shiite Iran have been on opposite sides of the conflict in Syria, as Tehran supports Syrian President Bashar al-Assad's government while Ankara has been seeking to topple him.

However, ties between Ankara and Tehran seem to have picked up since the two countries, along with Russia, launched the Astana peace process aiming to reach a cease-fire and a political solution in war-torn Syria.

The three guarantors of the cease-fire deal in Syria plan to deploy security forces as observers across de-escalation zones. Idlib Province, the rebels' stronghold in northwestern Syria bordering Turkey, is the main discussion point pending the full implementation of the agreement.

The independence referendum held by the Kurds in northern Iraq, which has further strained regional tensions, is another common concern for Iran and Turkey, as both have expressed alarm over the referendum and refused to recognize its validity.

Iran and Turkey strongly oppose the independence of Iraqi Kurds, fearing that this would provoke the Kurdish separatists in their own territories to seek autonomy. Both have threatened sanctions on the Kurdish Regional Government (KRG) in Iraq.

Turkish President Erdogan said on Sunday that the roadmap Turkey and Iran are expected to follow in response to the controversial referendum and other regional developments will take shape after his visit to Tehran.

Meanwhile, Turkish Prime Minister Binali Yildirim said Ankara hopes for a summit with Iranian and Iraqi leaders to coordinate the responses to the Kurdish independence vote.

In August, Iran's Chief of Staff Mohammad Baqeri visited Turkey. It was the first visit to Turkey by an Iranian military chief since the country's Revolution in 1979. In return, Baqeri's Turkish counterpart Hulusi Akar arrived in Iran for security talks on Sunday, days ahead of Erdogan's high-profile visit.

"The political, economic and international relations between Iran and Turkey are in a good position, but we should strive to advance military and defense cooperation consistent with other fields," Iranian President Hassan Rouhani said Tuesday after his meeting with the Turkish top general.

Turkey has begun constructing a 144-kilometer-long border wall with Iran, with the purpose of tackling illegal infiltration of armed militants and preventing drug smuggling. A similar barrier has already been built in border areas with Syria and is nearing completion.

Bilateral ties between Iran and Turkey have gained momentum, not because of overlapping interests, but overlapping concerns, daily Karar commentator Galip Dalay said.

"The most crucial driving factor behind the improved Turkish-Iranian relationship is the Kurdish geopolitics," Dalay said. "But their concerns are not limited to Kurdish achievements in northern Iraq, but also in Syria."

Citing a major change in the Turkish government's policies about the Syrian crisis, Dalay pointed to the fact that Turkey has shifted its priority from overturning the Syrian regime to containing Syrian Kurds' sphere of influence achieved through political and military means.