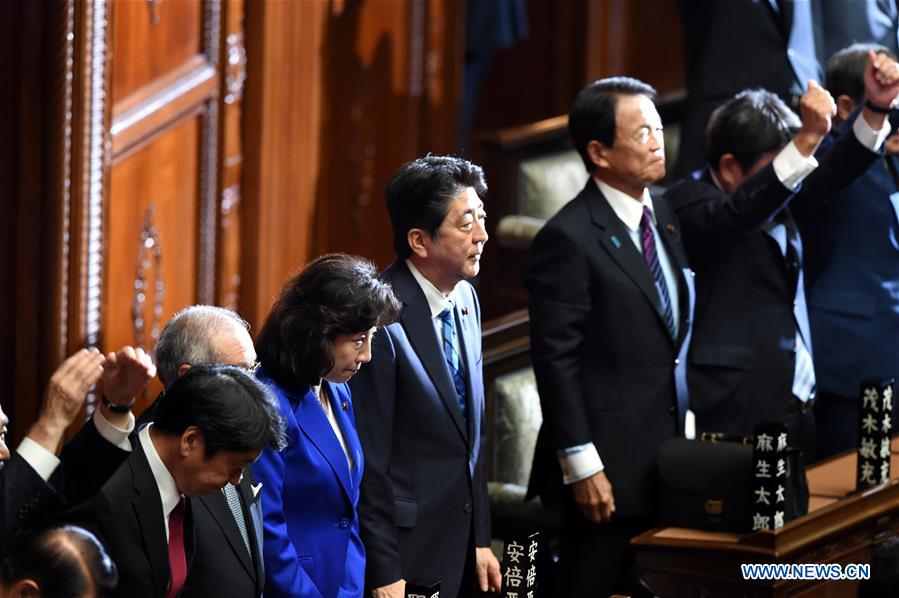 TOKYO, Sept. 28 (Xinhua) -- Japanese Prime Minister Shinzo Abe's dissolving the lower house of parliament Thursday and calling a snap election for Oct. 22 was supposed to be a straightforward piece of political brinkmanship aimed at seeing his grip on parliament tightened and his tenure at the helm extended.

Abe has seen the support rate for his cabinet tumble to historic lows following a string of gaffes and blunders linked to his ruling Liberal Democratic Party's and Komeito coalition ally's representatives.

None more so than a double cronyism scandal implicating the Japanese leader himself in both a cut price land deal which favored a nationalist school operator with alleged links to the prime minister, and favoritism shown to a personal friend of Abe in the selection of a veterinary school to be opened in a special deregulated zone in Japan.

"In theory, Abe has more than a year left in office, but he is aware of the fact that his support levels are unlikely to improve much more," said Koichi Nakano, a professor of Japanese politics at Tokyo's Sophia University.

"He has been pushed into a corner by the scandals and he is afraid that once parliament is reconvened, he will face further questioning and another sharp drop in the polls," asserted Nakano.

But no sooner had Abe believed he had ridden the waves of controversy and seen his support rate increase somewhat, he opted to call a snap election and in doing so made sure there would be no parliamentary session at which the opposition parties could take Abe to task over the alleged scandals, political commentators here said.

"There is nothing coincidental about the timing of Abe calling the snap election. As things stood at the time, his support ratings weren't that bad and the main opposition Democratic Party, under its new leader Seiji Maehara, was in a state of disarray with its members defecting to join other parties," Asian affairs commentator Kaoru Imori told Xinhua.

Imori added that while there were embryonic signs, no one could have predicted the extent to which the opposition camp, with their backs against the wall numerically speaking, could bring about such a monumental realignment that has taken Abe and his ruling LDP-led coalition aback.

Along with other commentators, Imori said that political insiders had been keeping a keen eye on popular Tokyo Gov. Yuriko Koike who announced she will launch a new national political party called "Kibou No To," which means Party of Hope in English.

The Tokyo Gov.'s move follows Koike's Tomin First no Kai's (Tokyoites First party) sweeping victory in the Tokyo metropolitan assembly race in July, which saw off challenges from rival parties, including the ruling LDP, which Abe is also the president of.

The Tokyo metropolitan assembly race is widely regarded as a barometer for the future direction of national politics and triggered rumors among political insiders that Koike was eyeing a return to national politics after her landslide win.

Koike, certainly not a political novice, served as a lower house member between 1993 and 2016 at which time she resigned to run in the gubernatorial election, which she won.

She previously held the defense minister portfolio in the Cabinet of Prime Minister Shinzo Abe, but resigned in August 2007 after just 54 days in office.

But of further concern to Abe and the ruling bloc, aside from her political pedigree and a small opposition party formed mainly from defectors from the Democratic Party, has been something akin to a wholesale realignment of the opposition camp.

Political analyst Teruhisa Muramatsu told Xinhua that the main opposition Democratic Party deciding to join forces with Koike's new Party of Hope in the upcoming lower house election and form a united front against the ruling LDP, while the Democratic Party will be essentially disbanded, could be a massive political game changer, or, at a bear minimum, a severe headache for Abe's ruling coalition to contend with into the future.

Political observers have said that such a realignment of opposition forces is not in Abe's best interests and likened it to the error in judgement made by British Prime Minister Theresa May in announcing in April that she planned to call a snap election.

"Similar to Abe's, her (May's) poll ratings were fairly solid and she was in no doubt that she would be returned as prime minister with a stronger hand over the House of Commons. But nothing could be further from the truth, as things panned out," said Muramatsu.

And with Abe, while his initial timing may have been right, the fresh realignment of the opposition forces has more than thrown a spanner in the works, with the new affiliation more than capable of relinquishing the ruling LDP-led coalition of some of its power in the lower house, Muramatsu added.

Other analysts concurred, saying the recent realignment of Abe's opponents could inflict some serious damage on an LDP-led coalition that for a long time has been allowed to wield its power in both houses of parliament almost at will.

"I think it is really bad news for Abe. She doesn't actually have to win, but she has to inflict a bloody nose on Abe... If her party does better than expected, expect the long knives to come out in the LDP, and Abe could be ushered to the exit," said Jeff Kingston, director of Asian Studies at Temple University's Japan Campus.