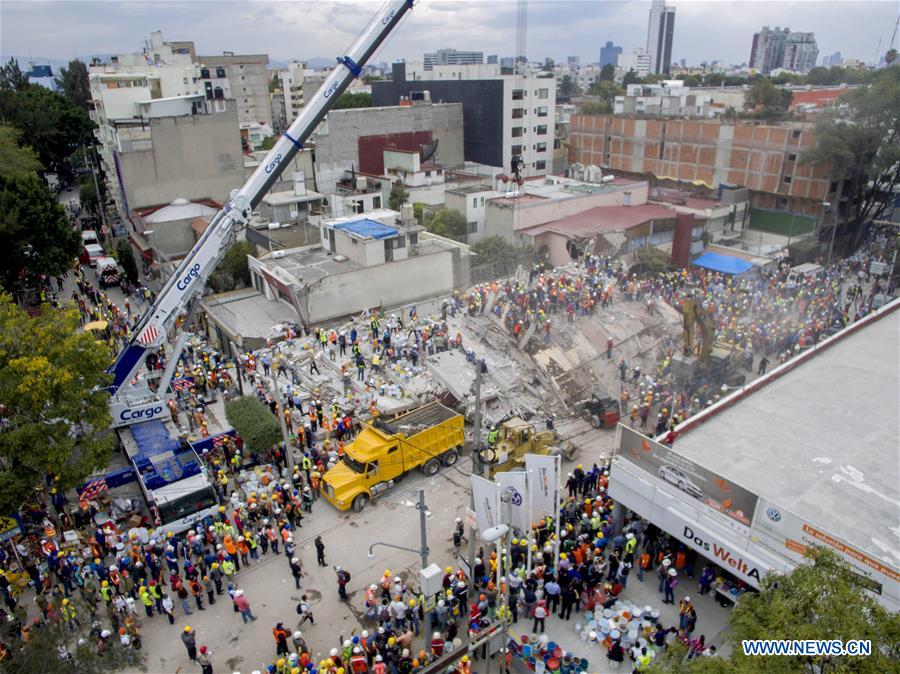 Photo taken with a drone shows rescuers and volunteers searching for survivors after an earthquake in Mexico City, capital of Mexico, on Sept. 20, 2017. Elements from the civil protection corps, Red Cross, army, police and voluntary civilians worked through the day on Wednesday to remove rubble from collapsed buildings in Mexico City, after the magnitude-7.1 earthquake shook the center of the country on Tuesday. (Xinhua/Cesar Vicuna)

MEXICO CITY, Sept. 20 (Xinhua) -- Elements from the civil protection corps, Red Cross, army, police and voluntary civilians worked through the day on Wednesday to remove rubble from collapsed buildings in Mexico City, after the magnitude-7.1 earthquake shook the center of the country on Tuesday.

The civil protection bureau on Wednesday said at least 230 people had died, including 100 dearths in the capital Mexico City.

Over 200 people gathered on the corner of the streets of Salamance, Nuevo Leon and Alvaro Obregon, where rescue workers sifted through the remains of an office block.

"It is thought there are between 40 and 60 people still there, but we don't know their state," one soldier participating in the rescue told Xinhua.

The area remains closed to traffic from the popular Espana Park to the Cibeles roundabout, where around 40 military vehicles are stationed with equipment and goods for the affected population.

The fountain of Cibeles, a famous tourist site in Mexico city, is also acting as a reception center for food, water and hygiene products as well as a first aid area.

"For the moment, only a few people have come with light injuries and another who had a nervous breakdown," one of the volunteers told Xinhua.

Heavy machinery also joined the efforts in Amsterdam Avenue, one of the emblematic areas of the city, known for its chic atmosphere, filled with cyclists and dog walkers.

In an interview with Televisa, Puente said that people were also trapped in fallen buildings in the northern area of Lindavista.

Another focal point has been the Enrique Rebsamen primary school in the south of the capital, where emergency teams and volunteers searched for over 30 missing children. However, hopes dwindled as the body count from the school passed 22 on Wednesday afternoon.

Mexico City's Mayor Miguel Angel Mancera announced on Wednesday that the number of collapsed buildings had been lowered from 45 to 38 after a complete investigation.

At a press conference, he said 52 people had been pulled alive from the rubble, that all hospitals were operating across the city and that all forms of public transport were running free of charge.

"The rescues are success stories for the rescue workers who are working at every single spot," added Mancera.

The earthquake in Morelos came days after the September 7 quake, which registered 8.2 on the Richter scale, and killed 98 people in the states of Oaxaca, Chiapas and Tabasco.

It also took place on the 32nd anniversary of a massive quake which killed over thousands of people on September 19, 1985.