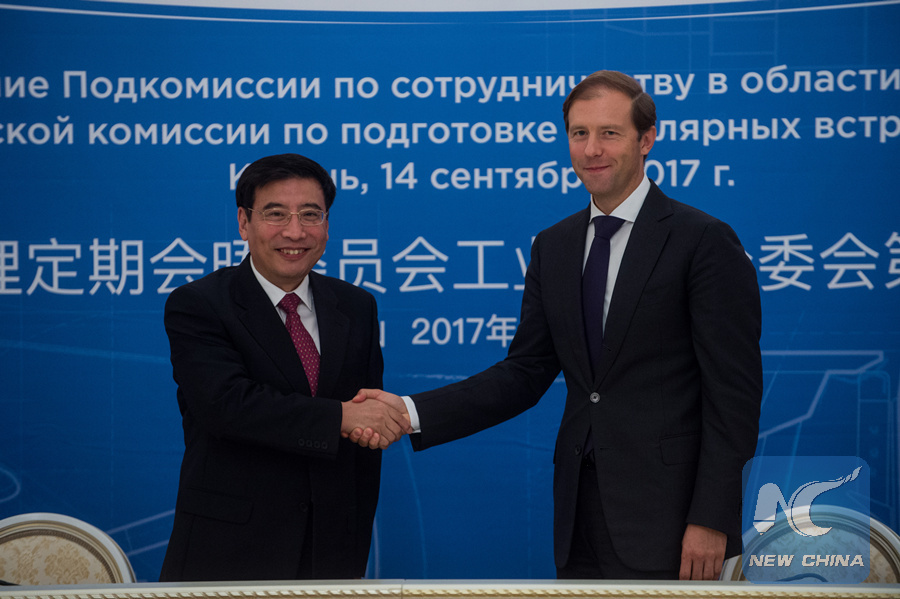 KAZAN, Russia, Sept. 17 (Xinhua) -- Russia and China can cooperate more closely in industrial and high-tech fields, and the future of such a partnership will be rosy, Russian Industry and Trade Minister Denis Manturov has said.

"We are always ready to develop cooperation in all areas where there is an opportunity to unite our potential," he told Xinhua in a recent exclusive interview here.

Manturov said he views Russia-China cooperation in industry and high technologies very positively and he has formed a working group on a wide range of industries together with Chinese Minister of Industry and Information Technology Miao Wei.

According to him, Russian fertilizers giant PhosAgro is considering with Chinese partners joint production of hydrochloric acid at one of its plants.

The Ammonium firm located in Russia's Republic of Tatarstan is mulling the possibility of Chinese investment in the expansion of the range of its ammonia-based products.

Russia has also invited Chinese enterprises to participate in the creation of industrial parks for the production of value added aluminum items.

According to Manturov, Russia exports its electricity, hydrocarbon resources and primary aluminum, but it paradoxically imports finished aluminum products.

"Therefore, to create added value in Russia, we are now considering with colleagues from foreign countries, particularly from China, the possibility of their participation in expanded production of cables or aluminum wheel plates for cars," he said.

China and Russia are now jointly developing a wide-body long-range airliner and they have reached the stage of a draft design, during which potential suppliers of components and units will be selected and the final look of the aircraft will be decided, said Manturov.

He said both sides are currently discussing the name for the new plane, which should be universally accepted in Chinese, Russian and global markets.

"We consciously chose this option (of civil aviation cooperation), realizing that by using our joint potential of fundamental and applied sciences and markets, we will be able to achieve the result faster than if we work separately," he said.

After the discussion, the two ministers witnessed the signing of an agreement on proposed Chinese investment in Tatarstan and a memorandum of understanding on holding a China-Russia innovation competition.

Manturov told Xinhua that the two countries can cooperate on a wide range of products and the most important thing is to create conditions for business, which will then advance concrete proposals and ideas.

He said the Russian Ministry of Industry and Trade is pushing for reducing barriers in the field of standards and in the formation of a favorable investment climate.