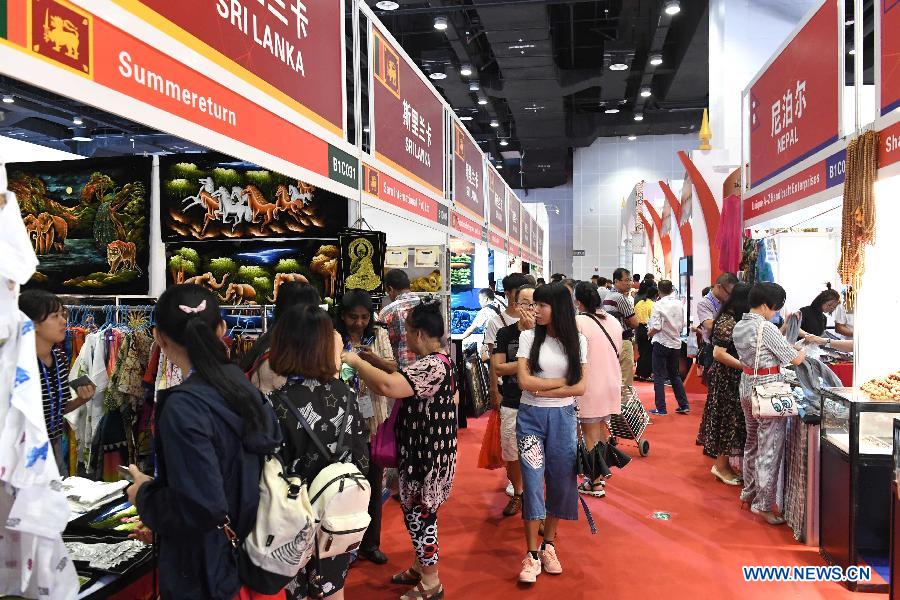 Visitors tour the exhibition area joined by exhibitors from countries along the Belt and Road during the 14th China-ASEAN Expo in Nanning, capital of south China's Guangxi Zhuang Autonomous Region, Sept. 13, 2017. The14th China-ASEAN Expo opened Tuesday, highlighting trade and investment among China, ASEAN and other countries along the Belt and Road. (Xinhua/Zhou Hua)

NANNING, Sept. 13 (Xinhua) -- At Puzhai Port, a trade zone bordering Vietnam in south China's Guangxi Zhuang Autonomous Region, trucks carrying dragon fruit, durian and other tropical fruit passing through the streets of one of the busiest trade hubs in the region.

Most commodities traded here are tariff-free thanks to a free trade agreement that went into effect in 2010. The China-Association of Southeast Asian Nations (ASEAN) Free Trade Area (FTA), the largest regional FTA in the world in terms of population, has reduced tariffs on more than 90 percent of goods traded between ASEAN and China to zero.

An updated version of the FTA is expected to further facilitate trade, scale up bilateral investment, and encourage technological cooperation.

"The protocol on upgrading the China-ASEAN Free Trade Area has already been signed and put into effect, and will inject new impetus to bilateral economic and trade development," Chinese Vice Premier Zhang Gaoli said.

He made the remarks at the opening of the ongoing 14th China-ASEAN Expo and the China-ASEAN Business and Investment Summit in the provincial capital Nanning.

The implementation of the upgrade will help China and ASEAN move closer toward realizing the goal of scaling up two-way trade to 1 trillion U.S. dollars by 2020, Brunei's Sultan Haji Hassanal Bolkiah said at the expo.

According to Xu Ningning, vice secretary-general of China-ASEAN Business Council, the FTA has served as a model for regional economic integration especially at a time when protectionism is rising in some Western countries.

At the expo, some companies said they have already felt the convenience brought by the upgraded FTA. According to Li Chuanren, general manager of Guangxi Overland Total Logistics, a firm that offers two-way logistics services between Southeast Asia and China, simpler and transparent customs clearance procedures have saved the company at least 60 percent of the required time.

"When you make the process digital, it's easier for companies to manage their time and inventory levels. It's also easier for regulators to manage all the data," Li said.

With increasing trade opportunities between ASEAN and China, Li said the company has seen a 15-percent rise on average in terms of business orders in the past few years.

It's not only trade that the FTA is trying to promote. According to Xu, it also encourages deeper investment collaboration that brings mutual benefits.

As ASEAN countries are pushing for urbanization and industrialization, they have an urgent need for funding as well as technology, which turns out to be China's advantage, Xu said.

According to data from China's Ministry of Commerce, the cumulative two-way foreign direct investment (FDI) between China and ASEAN has reached 185 billion U.S. dollars. In the first seven months this year, China invested 4.82 billion U.S. dollars into ASEAN.

The upgraded FTA also encourages all parties to share information and expertise on issues related to e-commerce.

In response, a China-ASEAN cross-border e-commerce platform was established in late 2016. In about three months, the website has attracted 135 ASEAN companies, with 646,000 orders placed during the period.

"The construction of the China-ASEAN FTA has enabled the two sides to share a common market of more than 2 billion people. In the future, the Belt and Road Initiative will bring bilateral ties closer while people-to-people exchanges will be more convenient, said Zhai Kun, a professor of international relations at Peking University.