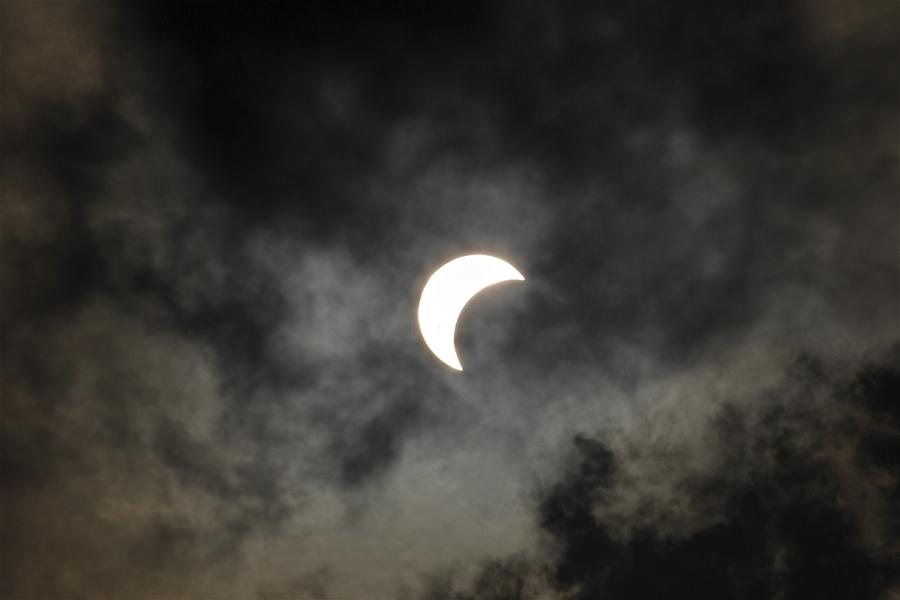 Photo taken on Aug. 21, 2017 shows that the moon eclipses the sun during the process of a partial solar eclipse over New York, the United States. A once-in-a-century total solar eclipse is spanning the continental United States on Monday, creating a 70-mile-wide (112 kilometers) path of totality stretching from Oregon in the Pacific Northwest to South Carolina on the Southeast Coast. Observers outside the path of totality will see only a partial solar eclipse where the moon covers part of the sun's disk. (Xinhua/Li Muzi)

It was the most-observed eclipse in American history, with millions of people staking out viewing spots to watch, especially along the path of totality across the country.

Sean Nealon, a spokesman of the Oregon State University, which was the first university in the country in the path of totality, said an estimated 5,000 people attended the viewing party in the university and hundreds more watched at other locations throughout campus.

Hours before spectators began to gather at Student Legacy Park, six atmospheric balloons were launched from Peavy Field on the campus, as part of a NASA endeavor, known as the Eclipse Ballooning Project, to about 100,000 feet, or 30,500 meters, above the Earth and capture images of the eclipse.

Star-gazers in Southern California turned their eyes to the sky, with hopes of experiencing the total solar eclipse, even though the state was treated only to a partial blocking of the sun by the moon and saw only about 62 percent of the sun obscured.

Crowds gathered at viewing parties across the state, most notably at the Griffith Observatory in Los Angeles, but also at the city parks and science facilities.

"I am really interested in seeing this. It's pretty cool. But I thought it would be darker," sky-gazer Jennifer Fernandes told Xinhua.

At the White House, President Donald Trump and First Lady Melania Trump looked at the solar eclipse from the office balcony.

Though New York City is not in the path of the total solar eclipse, tens of thousands of the Big Apple's residents flocked to parks, squares, rooftop bars etc., to witness a nearly 72 percent eclipse of the Sun.

The action began at 1:23 p.m. in the city when the moon start to pass in front of the sun. The cloudy skies darkened slightly as the partial eclipse appeared around 2:44 p.m..

The blazing sun turned into a crescent shape as the darkened moon passed before it. By 4 p.m., the moon moved on and the skies returned to normal.

In Time Square, thousands of sky-gazers burst into cheers as the once-in-a-lifetime eclipse appeared.

American Museum of Natural History, one of city's most popular museums, hosted a special viewing party for the visitors to experience the eclipse.