Solar eclipse turns out millions of spectators in U.S. 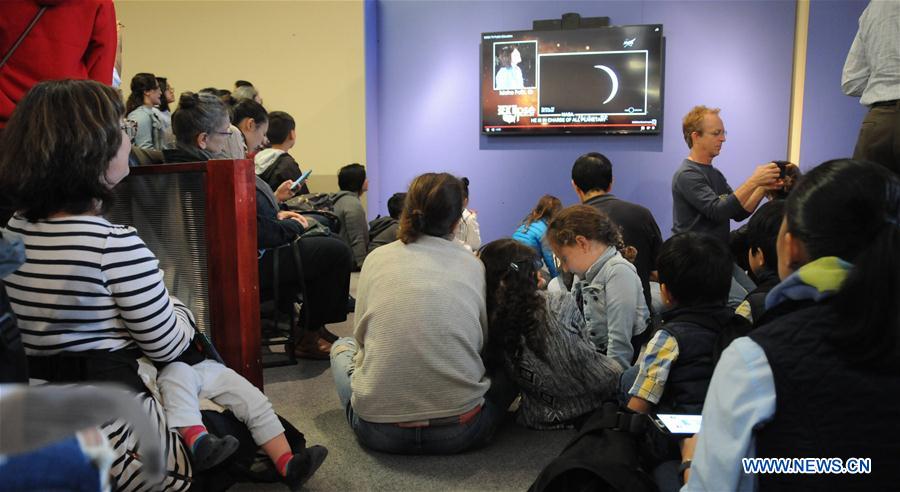 People gather to watch the livestreams of the solar eclipse at the Lawrence Hall of Science near San Francisco, the United States, on Aug. 21, 2017. A once-in-a-century total solar eclipse is spanning the continental United States on Monday, creating a 70-mile-wide (112 kilometers) path of totality stretching from Oregon in the Pacific Northwest to South Carolina on the Southeast Coast. (Xinhua/Ma Dan)

SAN FRANCISCO, Aug. 21 (Xinhua) -- For the 300 people gathering Monday morning at Lawrence Hall of Science in Berkeley, California, the enthusiasm was high to know more about the total solar eclipse.

Berkeley, a city northeast of San Francisco, was outside the path of totality 70 miles, or 112 kilometers, across on the ground in 12 states in the United States, stretching from Oregon in the Pacific Northwest to South Carolina on the East Coast.

In addition, the cloud was low most of the time on Monday morning over the Hall of Science, a public science center located in the University of California, Berkeley.

Nevertheless, some of the people paid 12 U.S. dollars for a ticket to be there, and stayed indoor to watch live streaming from the U.S. National Aeronautics and Space Administration (NASA).

In another campus 560 miles, or 900 kilometers, up north, at Oregon State University (OSU), Corvallis, thousands of people did see the sight of the moon completely covering the sun, as the city in central western Oregon was in the path of totality.

For about 2 minutes, before 10:17 Pacific Daylight Time, the day turned to evening and the Sun's corona blazed in the sky.

Sean Nealon, a spokesman of the university, which claimed to be the first university in the country in the path of totality, noted in a telephone interview that an estimated 5,000 attended the viewing party and hundreds more watched at other locations throughout campus.

Actually, as most students were yet to return to school, the university hosted nearly 2,000 overnight guests from 23 states, mostly from the West Coast, but also from Hawaii, Florida and Texas; and a few from Australia, Canada, Columbia, Germany and Ireland, in about 900 residential hall rooms and suites on campus.

Hours before spectators began to gather at Student Legacy Park, six atmospheric balloons were launched from Peavy Field on the campus, as part of a NASA endeavor, known as the Eclipse Ballooning Project, to about 100,000 feet, or 30,500 meters, above the Earth and capture images of the eclipse.

Images from balloons of the kind, launched by a total of 55 teams on the ground along the path of totality and expected to be operational for three hours, were transmitted using radio signals and upload for a live stream at http://eclipse.stream.live/.

With Oregon in a front row seat to observe the event, the first total solar eclipse visible in the United States since 1776, millions across the country took the change to record what they believe to a once-in-a-life-time experience.

The Eclipse Megamovie project, a collaboration between the UC Berkeley and Google, a technology company headquartered in California, released an application, or app, weeks ago for U.S. scientists with smart phones to photograph the eclipse and upload the images.

In addition, the project deployed some 1,500 trained volunteers across the United States to photograph the event along its path using digital single lens reflex and mirrorless cameras with telephoto lenses, so as to provide a lasting photo archive for scientists studying the sun's corona. The images would be stitched together into a short, time-lapse movie of the eclipse later in the day.