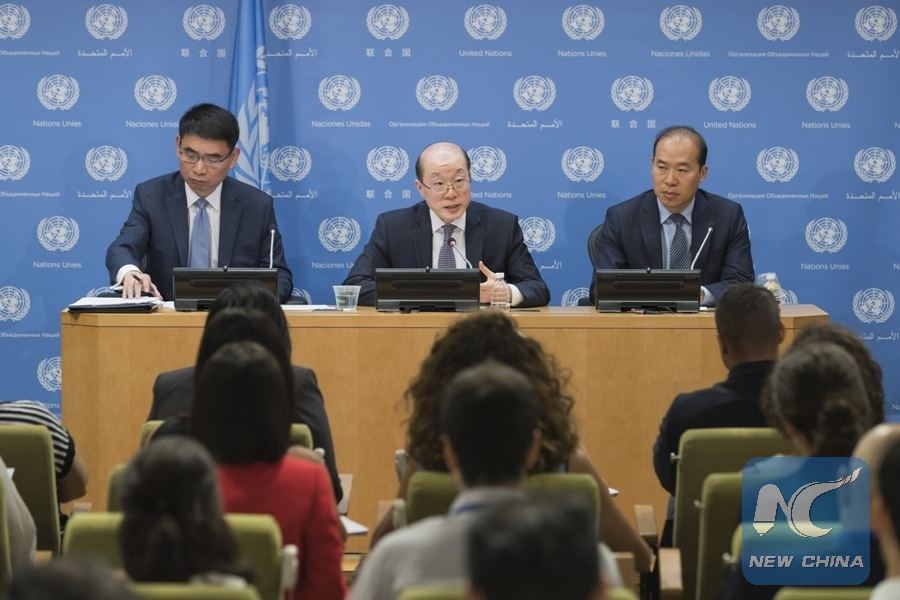 UNITED NATIONS, Aug. 1 (Xinhua) -- A Chinese envoy to the United Nations Monday called for negotiated solutions to the nuclear issue on the Korean Peninsula.

Liu Jieyi, China's permanent representative to the UN, made the statement at a press conference on Monday, marking the end of China's rotating term of the Security Council President for the month of July.

Liu said China is firmly opposed to any violation of the Security Council (UNSC) resolutions, including nuclear tests and ballistic missile tests by the Democratic People's Republic of Korea (DPRK).

China has been urging the DPRK and other relevant countries not to exacerbate the situation on the Korean Peninsula by avoiding words and actions that could escalate regional tensions, which run counter to the objectives sought by the UNSC.

"Our objective is to achieve denuclearization of the Korean Peninsula, maintain peace and stability on the peninsula and to seek negotiated solutions through dialogues and consultations," said the ambassador.

China is opposed to conflicts or wars on the peninsula, he said.

"Basically, if you can generalize broadly what relevant resolutions contain, they contain sanctions to address the nuclear ballistic missile programs in the DPRK," he added.

Liu said that normal economic relations should be maintained, and the resolutions are not intended to have adverse humanitarian consequences for the DPRK's civilians.

"China has been working very hard to try to initiate an negotiated solution of the issues of denuclearization, peace and stability," he said.

"In doing so, we have proposed a package solution, including 'freeze for freeze', 'suspension for suspension' and denuclearization for peace or security mechanism on the ground," he added.

At the meeting, the ambassador also told the media that China has been working with the Russian Federation to put forth a road map for achieving regional peace and the UNSC's objectives.