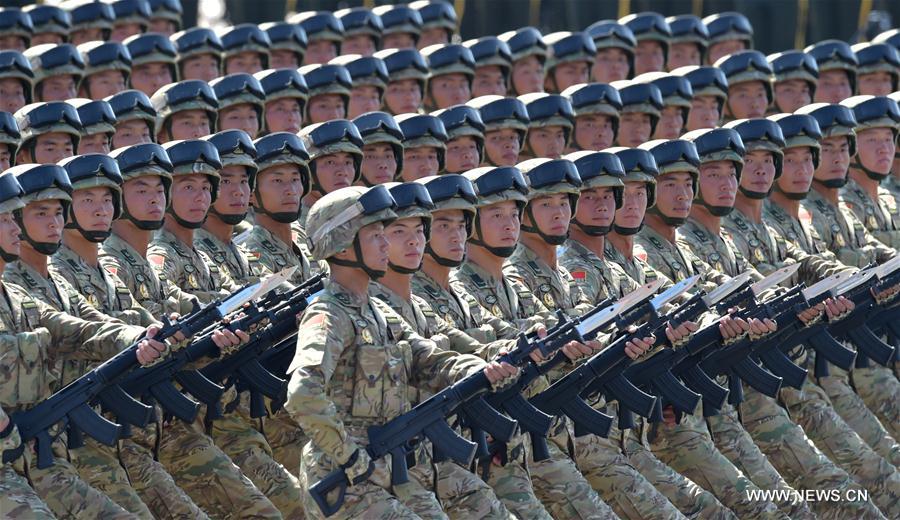 File photo taken on Sept. 3, 2015 shows the phalanx honoring heroes of "Assault Heroic Company" attending a military parade in Beijing, capital of China. It has been a big year for China's military as the People's Liberation Army (PLA) is to celebrate its 90th birthday. As Aug. 1, the birthday of the PLA, approaches, the country's army has shown how much its military capacity has grown and how committed it is to maintaining world peace. The PLA has come a long way since its birth during the armed uprising in the city of Nanchang on August 1, 1927, when it had only 20,000 soldiers. Ninety years later, the country boasts 2 million servicemen, according to a national defense white paper titled "China's Military Strategy," published in 2015. Besides the growth in numbers, the PLA has armed its soldiers with world-class equipment. As of June 2017, the Chinese military had participated in 24 UN peacekeeping missions, sending 31,000 personnel, 13 of whom lost their lives in duty. Since 2008, the Navy has dispatched 26 escort task force groups, including more than 70 ships for escort missions in the Gulf of Aden and off the coast of Somalia. More than 6,300 Chinese and foreign ships have been protected during these missions. (Xinhua/Luo Xiaoguang)