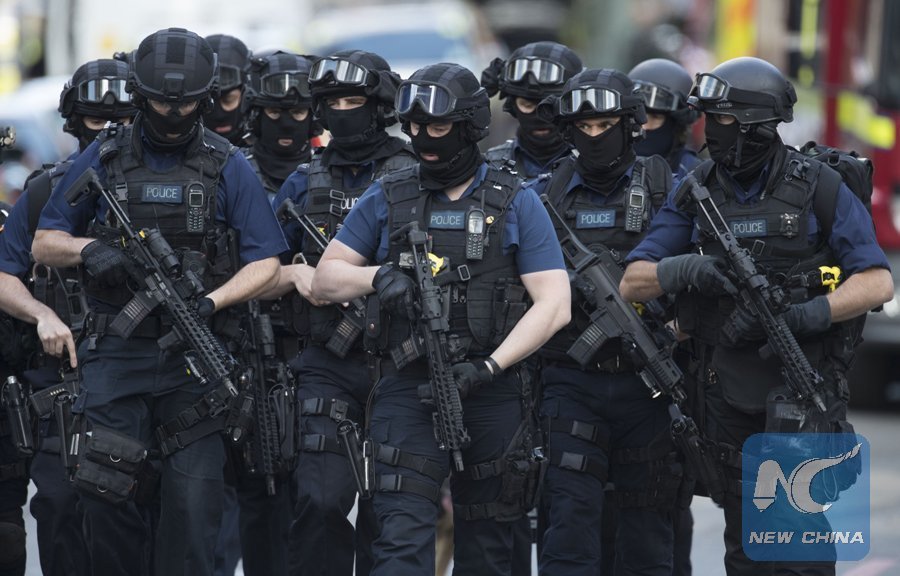 Armed police officers patrol near London Bridge after the terror attack took place on Saturday night in London, Britain on June 4, 2017. (Xinhua/UK OUT)

Chief UN spokesman Stephane Dujarric said that the secretary-general welcomed adoption of the General Assembly resolution "which endorsed his proposal to establish a new UN Office of Counter-Terrorism."

The resolution was passed by consensus.

The spokesman said the new office would be "a major reform of the UN Counter-Terrorism architecture" and later told reporters it would "bring coherence to all the different entities, in coordination, to counter terrorism."

"The secretary-general expects the UN Counter-Terrorism Centre within the new Office of Counter-Terrorism to play a central role in the provision of enhanced capacity building assistance to member states," said the spokesman, who declined to speculate on when Guterres would name someone to head the office.

"The Secretary-General considers counter-terrorism and prevention of violent extremism to be one of the highest priorities of the United Nations to address a growing threat to international peace and security," Dujarric said. "He therefore hopes that this reform of the UN Counter-Terrorism architecture will contribute to the UN's broader efforts to promote conflict prevention, sustainable peace and development."

The General Assembly president said that "this resolution will enhance the United Nations' capability to assist member states in implementing the UN Global Counter-Terrorism Strategy across its four pillars by ensuring greater coordination and coherence across the UN system, and by improving visibility, advocacy and resource mobilization for United Nations' counter-terrorism efforts."

Thomson said the resolution shows "unwavering commitment to strengthening international cooperation to prevent and combat terrorism in all its forms and manifestations, and to reaffirm that any acts of terrorism are criminal and unjustifiable, regardless of their motivation, wherever, whenever and by whomsoever committed."

"I thank all delegations for working cooperatively and constructively throughout the consultation process and for supporting my office in securing this resolution," he said.

Dujarric said Guterres thanked member states "for their strong support for his initiative."

The spokesman also added, "The secretary-general expresses appreciation to the role being played by the UN Counter-Terrorism Centre Advisory Board in guiding its work, and the growing number of member states who are contributing to it."