A photo of Zhang Yingying released by the police.

CHICAGO, June 15 (Xinhua) -- A massive search continued in Urbana, the U.S. state of Illinois, on Thursday to find a visiting scholar from China who has been missing from the University of Illinois at Urbana-Champaign (UIUC) since Friday.

In a choked voice, Zhang Ronggao, father of missing visiting scholar Zhang Yingying, expressed gratitude to all people involved in the search for his daughter, and pleaded with U.S. police to speed up the search.

In an interview with Xinhua through Wechat on Thursday, Zhang Ronggao said to his daughter: "Dad is waiting for you to come back."

Security video footage released by the police showed that Zhang, a visiting scholar from China's Fujian Province, went missing around 2 p.m. on Friday after getting into a black Saturn Astra hatchback on the brink of the UIUC campus.

Zhang, 26, was last seen wearing a charcoal-colored baseball cap, pink and white top, jeans and white tennis shoes and carrying a black backpack, according to the police. 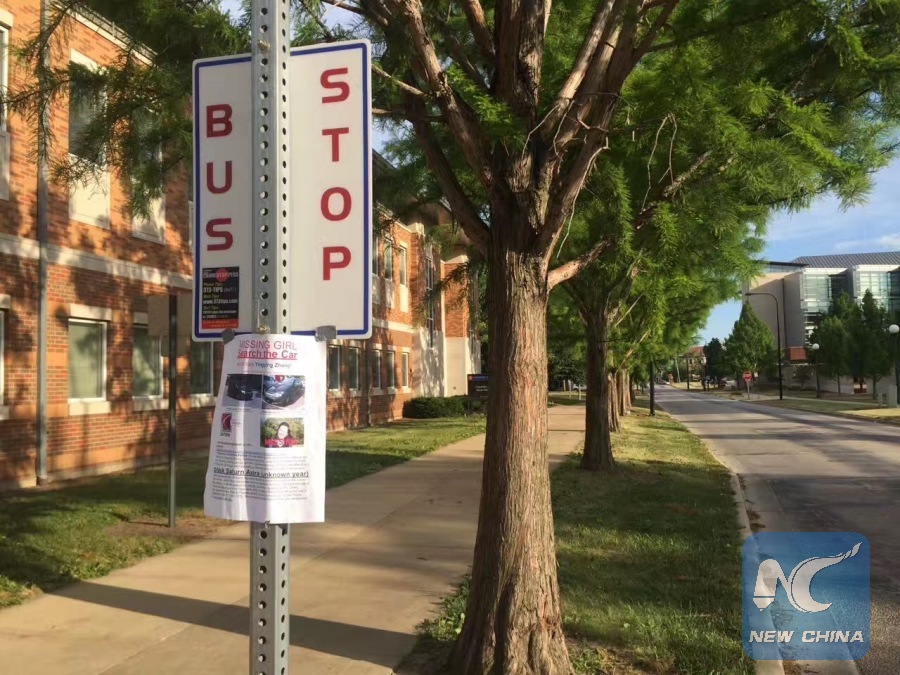 A poster searching for Zhang Yingying is placed on the campus of the University of Illinois at Urbana-Champaign (UIUC).

On Wednesday, the Federal Bureau of Investigation (FBI) announced Zhang Yingying's disappearance a kidnapping case, and said that the suspect appears to be a white male.

The suspect is a white man who circled the area in the car on Friday afternoon before stopping to talk to Zhang, the FBI said.

As six days have passed since Zhang's kidnapping, it is possible that the suspect has gone to other U.S. states, the FBI said.

The Chinese Consulate General in Chicago has responded quickly to the incident. Deputy Consul General Yu Peng and other Chinese consuls are now in close touch with UIUC officials and the U.S. police in the search, and are helping relatives of Zhang go through procedures to come to the United States.