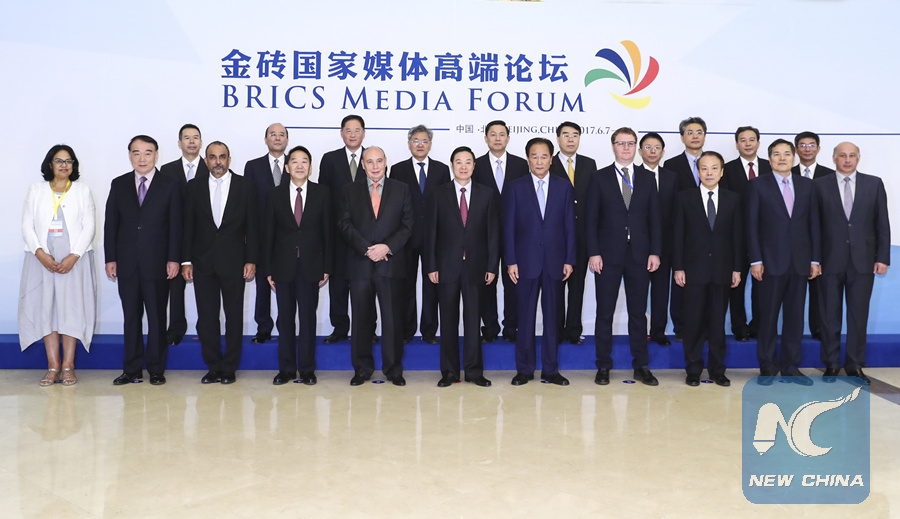 Liu Qibao (C), member of the Political Bureau of the Communist Party of China (CPC) Central Committee and head of the committee's Publicity Department, poses for a group photo with guests and delegates before the opening ceremony of the BRICS Media Forum in Beijing, capital of China, June 8, 2017. (Xinhua/Xie Huanchi)

MOSCOW, June 9 (Xinhua) -- The prime task of the media of the BRICS countries is to pool efforts to restore the balance in the global information space, said Oleg Osipov, first deputy editor-in-chief of Russia's Sputnik International News Agency.

Currently one-sided pictures of the world mainstream media still prevail, and the support of the emerging unified information space and opportunities for its innovative development is needed to achieve information balance globally, Osipov said after the latest BRICS Media Forum held in Beijing from Tuesday to Thursday.

From this perspective, the BRICS Media Forum made a great contribution, as it proved to be an "effective platform for dialogue" among the leading media of the BRICS countries, he said.

"Many colleagues once again confirmed their interest in the regular exchange of content for the implementation of joint information projects," Osipov said.

Initiated by China's Xinhua News Agency and mainstream media outlets in Brazil, Russia, India and South Africa, the BRICS Media Forum, gathered leaders of 27 major media organizations from the BRICS countries, who discussed opportunities and challenges facing them as well as approaches to strengthen dialogue and cooperation.

Despite the active development of BRICS over recent years, there are still negative aspects in the coverage of its activities in the international information field, Osipov said, especially in light of the long-existing dominance by Western media.

Osipov noted the importance of creating a qualitative and strong information environment within the borders of the BRICS countries, saying that it is a necessary step to eliminate negative influence of Western media and strengthen the BRICS' positions in the international information field.

"I am convinced that only by joining our forces can it be possible to build a media space based on pluralism of points of view and deny manipulative information impact on the population of other countries," he said.

Calling new media an "indisputable trend" of recent years, Osipov said that the challenges of the digital age of social development and the constantly changing preferences of the audience cannot be overlooked, either.

"Therefore, it is especially important for media of the BRICS countries to share with each other the experience and ideas of the development of online trends based on classic media, as well as methods of preventing cyberthreats," he added.

In view of various old problems and new challenges, enhancing cooperation among media of the BRICS countries is of great importance, which the BRICS Media Forum has been contributing to for years, Osipov said.

"If we talk about joint projects, we should say that the number of ideas, both implemented and those in work, is great. These include the exchange of content, participation in press tours, video bridges and intelligent online tournaments, as well as the organization of joint expert events and media training," he said.

As an example, Sputnik currently has 16 existing cooperation agreements with media of the BRICS countries, including 10 with China, said Osipov.

During the Beijing forum, the Action Plan to Strengthen Cooperation among BRICS Media was launched, which is aimed at making joint efforts to balance international opinions, enhance the social responsibility of media, and deepen understanding among the people of the BRICS countries.