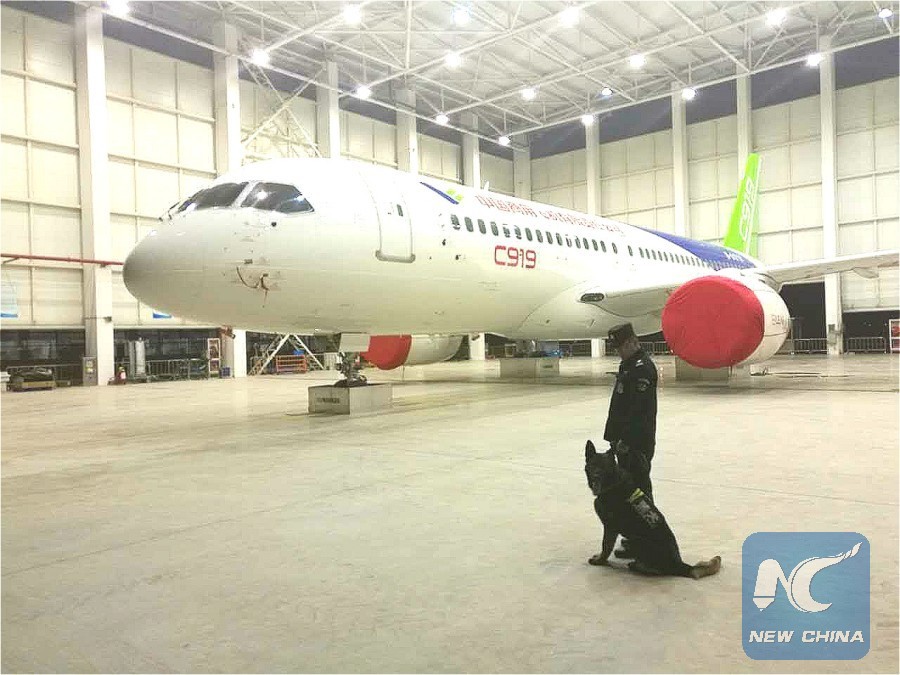 The photo provided by COMAC shows that China's first domestically-built large passenger jet C919 at a hanger of the Chemmercial Aircraft Corporation of China (COMAC) in Shanghai, China, on May 5, 2017. The plane completes its maiden test flight on the same day. (Xinhua/Photo)

LOS ANGELES, May 6 (Xinhua) -- China's first indigenously-designed large passenger aircraft, the C919, successfully completed its maiden flight on Friday in the eastern city of Shanghai, providing a win-win cooperation for both China and the global market.

"The C919 not only generates a great source of pride for China, but also represents mutual benefits and cooperation between China and the rest of the world. For this reason, the C919 program also carries the pride and hopes of people across the globe," Ye Wei, executive director and president of COMAC America Corporation, told Xinhua in an interview on Thursday at his office in Los Angeles, California.

The successful flying of C919 is a crucial step in earning its manufacturer, COMAC (Commercial Aircraft Corporation of China), a position alongside Airbus and Boeing as a major player in the large passenger aircraft industry, where the three players could become known as the "ABC" of aircraft manufacturing.

Out of the overall design of the C919, the airframe is, from its initial design to calculations, testing, and construction, independently researched and developed in China.

The research and development of the airframe gave rise to multiple technical breakthroughs, such as the unique design of the supercritical wing and different applications of new construction materials.

At the same time, the C919 can be considered a paragon of global cooperation. Major components such as the engines, avionics, control systems, and more are sourced from numerous joint ventures and partners across Europe and the United States.

With major suppliers such as General Electric and Honeywell, the C919 project can be said to cover the world. The C919 features major components from 17 Level 1 suppliers around the globe, with Level 2 and 3 suppliers numbering in the hundreds.

"This is why the C919 is more than just China's pride. It also represents mutual benefit that stretches far beyond China's borders," Ye said.

In order to succeed in an increasingly globalized business world, international cooperation is a must. From this point of view, the C919 provides significant economic benefits to each of its international suppliers and their nations.

In posts on its social media accounts, Honeywell stated that with nearly 1,000 of their employees across the world working to support the C919 project, the entire Honeywell workforce shared COMAC's pride at the success of the first flight. Darius Adamczyk, Chairman and CEO of Honeywell was one of the first to send his congratulations to COMAC Chairman Jin Zhuanglong, which read: "We are extremely proud that COMAC chose Honeywell to provide four major systems for this sleek and modern aircraft. We are proud of our partnership with COMAC and eager to continue to help advance aviation capabilities in China." 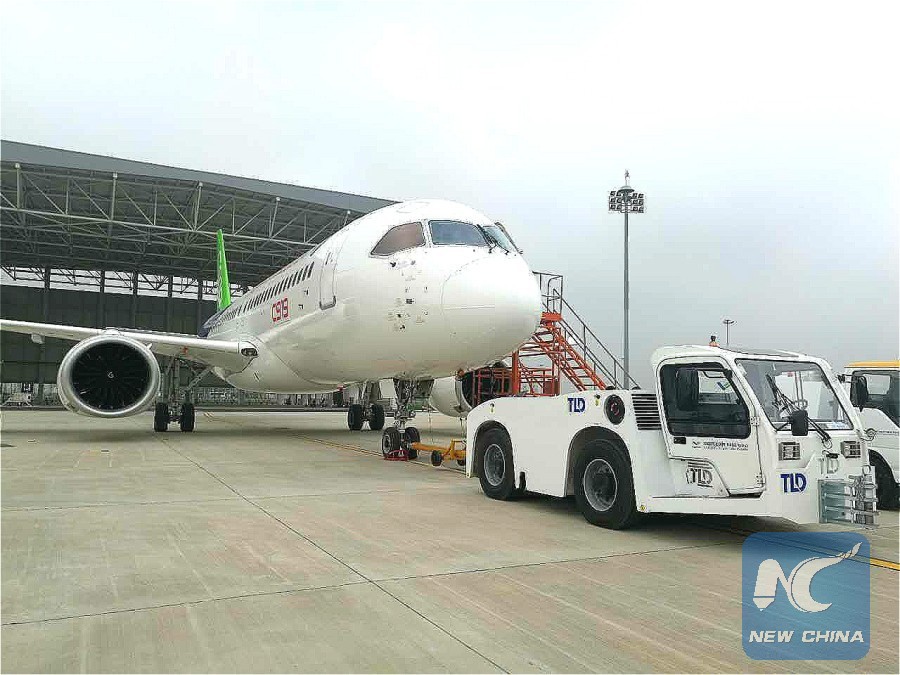 NO THREAT TO BOEING, AIRBUS

At the moment, China's large passenger aircraft have a long way to go before they can truly compete with Boeing and Airbus on the international market, much less present a genuine threat to either manufacturer. Over a considerably long timeframe, the C919 is planned to mainly be used in China's domestic market, helping to meet its demand.

In the short term, production of the C919 will be limited and its numbers will be far from enough to make a significant impact. At the moment, the C919 has a total of 570 orders, the vast majority of which were made by domestic Chinese customers.

In fact, at the moment Boeing and Airbus are enthusiastically cooperating with COMAC, making use of the Chinese company's manpower and resources to develop the Chinese aviation market.

As one of COMAC's major international partners, Aviage Systems is responsible for three avionics work packages on the C919.

Immediately following the first flight of C919, company Chairman and CEO Alan Jones sent COMAC his best wishes, stating "Aviage Systems is very proud to be COMAC's close partner as both sides worked with common purpose, encouraging each other and overcoming obstacles along the way. We are honored to be a part of this historical occasion."

Regarding the significance of the first flight and the road ahead, Robert Morefield, a senior aeronautical engineer with over 40 years of experience in the industry,said, "The success of the C919's first flight is a critical step in the comprehensive test flight process. This milestone opens the path for a multitude of required future test flights that will ensure the aircraft is safe and ready for public service."

However, among congratulations from all over the world, there were some who used the occasion to politicize the C919 program and treat it as if it was a threat to the rest of the world.

"This is a very shortsighted way of looking at it," said Ye, referring to these criticisms. "With cooperation comes mutual benefit. I think this is something people of every nation would like to see," he said.

"If other countries were to refuse this cooperation and place unnecessary embargoes and limitations on these kinds of projects, it would only harm the idea of a fair and open market and ultimately damage the economic welfare of individuals throughout the world," Ye said.