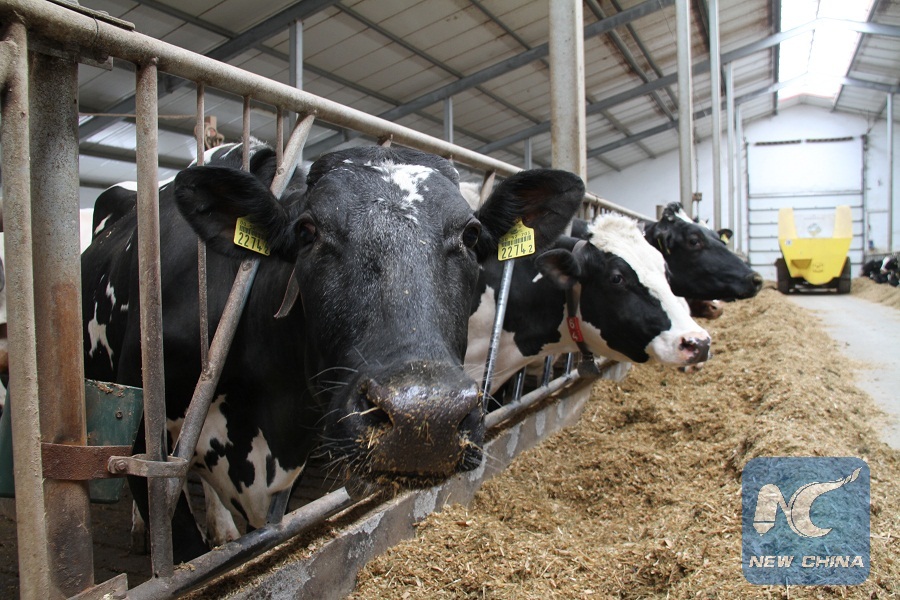 WARSAW, May 2 (Xinhua) -- Never before has Mariusz Marczak shown so much interest in the Chinese market half a world away from Poland.

Marczak, also a new father of 1-year-old daughter, keeps around 170 milk cows in the small vilage of Lipnice, more than one hour's drive from the Polish capital of Warsaw.

Just about 60 kilometers west of Marczak's cow farm, the Polish city of Lodz now has a direct cargo railway connection with Chengdu, the capital city of Southwest China's Sichuan Province.

The rail connection is one of the symbolic projects of the Belt and Road Initiative, a China-proposed transnational network of trade, investment and economic development.

"As a milk producer, I look to the Chinese market, as it is a huge opportunity. We want to produce more quality product to satisfy Chinese consumers. I can assure you that the Polish milk products stand firm as far as quality is concerned," Marczak tells Xinhua.

Marczak took over the family farm from his father who started his career with only three cows in 1970s. Marczak had never thought about taking his current career until he graduated from the university where he studied agronomy.

"I start work at around 6:30 a.m. every day. When I come to the cowshed, first I check the cows' health parameters to see if everything goes as usual, then I do some cleaning work and give fresh food for the cattle. Thereafter I go out to work in the fields," Marczak recounts his daily routine, while his daughter looks at milk cows with curiosity.

The cows stay in pleasant conditions, some were freely eating and drinking, some were enjoying massage with the help of automatically-rotating brushes, and some were performing mechanical milking process on their own.

Marczak has equipped his farm with automatic milking machines and three tractors etc. and now his farm produces around 3,000 liters milk a day. Thanks to mechanization, he manages the large farm only with his father's help. Apart from cows, they are cultivating 70 hectares of field, 35 hectares of which grows corn for cow feeding.

"At the beginning, I never thought it was possible," says Stanislaw, Marczak's 65-year-old father. But it was due to hard work and good cooperation with Lowicz Cooperative Plant (OSM Lowicz) which was created 110 years ago.

"Our cooperation began in the 70s and lasted uninterruptedly until now. And it ensures stable price and reduces risks," he said.

"Last year, we exported about 600 containers of milk products, worth about 10 million euros, to China, but we do hope it will continue to rise, as we are capable to produce much more," Makos says.

OSM Lowicz now produces more than 250 types of products and exports them to 56 countries and is among top 5 dairy producers in Poland. The plant in Lowicz is their biggest one, but they also have five more around the country. They export UHT milk and cream, butter, whey powder and yogurt drinks to Chinese market.

To meet the taste of the Chinese consumers, they have done lots of research and developed a kind of yogurt drink with Greek-style last October.

"Jovitos Greek-style yogurt is especially designed especially for the Chinese market. In order to achieve our goal we had taken many visits to China taking part in food fairs and events and visited supermarkets in China, we listen to the consumers' opinions to see what is most popular. Furthermore we do our best to provide best quality product, tailored to the their requirements," Makos says.

"We equipped our factories with modern facilities and are using the newest technologies in processing annually more than 570 million liters of milk," Makos says. Comprehensive quality control is being done by qualified personnel in accordance with standards.

"We are ready to increase production and export more to Chinese market," he adds.

Following the Russian embargo on European agricultural products in 2014, more Polish producers have turned to the Chinese market.

"The Belt and Road Initiative is an opportunity to improve the bilateral trade cooperation in agri-food sector. We are convinced that the Polish food products can be attractive to the Chinese in terms of price and quality," says Katarzyna Szymanska, head of Unit of Export Support Office of Agricultural Market Agency of Poland.

The increase of cargo trains between China and Poland becomes more appealing as more and more Polish food products, such as wine, has already used this transportation mode.

"The regular, fast rail transport may be a drive to establish new, fruitful business relationships by a greater number of entities whose maritime transport was too long or whose goods did not qualify for this type of transport," Szymanska says.

In addition, Szymanska believes that Poland can become the regional center of trade exchange between China and Central and Southeast Europe.

Although the milk products are currently sent to China through maritime transport, the producers believe the cargo railway transport could be a good solution, especially taking time cost into consideration.

"Lodz, the starting point of railway connection is only 50 kilometers from our plant, while the harbor on the seaside, almost 300 km. The transportation costs directly influence the final cost of the product, so it would be beneficial for every part to decrease it," Makos says.