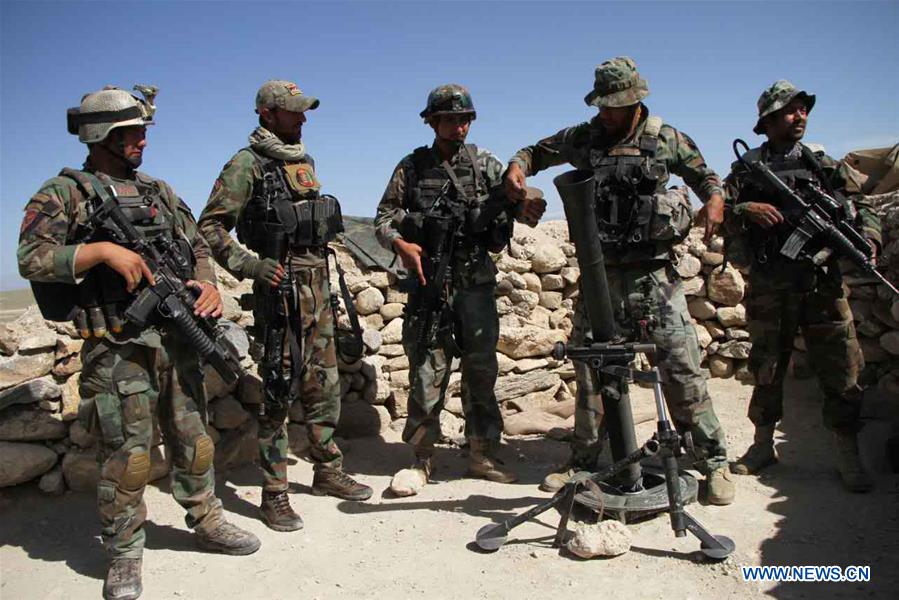 Afghan army soldiers stand near a checkpoint, 2 km from the explosion core area in Achin district of eastern Nangarhar province, Afghanistan, April 14, 2017. At least 36 Islamic State (IS) militants were killed after the U.S. forces in Afghanistan struck their position with a large bomb in eastern Nangarhar province, the Afghan Defense Ministry said on Friday morning. (Xinhua/Rahman Safi)

KABUL, April 14 (Xinhua) -- At least 36 Islamic State (IS) militants were killed after the U.S. forces in Afghanistan struck their position with a large bomb in eastern Nangarhar province, the Afghan Defense Ministry said on Friday morning.

"The strike has destroyed an IS headquarters, three IS hideouts along with several bunkers and deep tunnels as well as huge amount of weapons and ammunition," the Afghan Defense Ministry said in a statement.

No civilian was hurt following the raid which took place in Mohmand Dara village, Asadkhil area of the district, the statement noted.

The strike was designed to minimize the risk to Afghan and U.S. forces conducting clearing operations in the area while maximizing the destruction of IS fighters and facilities, the U.S. Forces-Afghanistan, which is part of NATO-led Resolute Support said after the strike.

"U.S. forces took every precaution to avoid civilian casualties with this strike. U.S. forces will continue offensive operations until ISIS-K (IS) is destroyed in Afghanistan," it said.

Afghan President Mohammad Ashraf Ghani has hailed the attack on the IS position.

"Precautions were taken to avoid civilian casualties with this air strike. Assessment of the casualties to the ISIS-K is in process," the Afghan Presidential Palace said in a statement.

Achin has been regarded as IS stronghold.

The mountainous province with Jalalabad city as its capital, 120 km east of Kabul, has been the scene of clashes between security forces and IS militants since the emergence of IS there in early 2015.

More than 1,900 IS militants, several Afghan security forces and two U.S. soldiers have been killed in Achin and neighboring district since 2015, according to Afghan military officials.