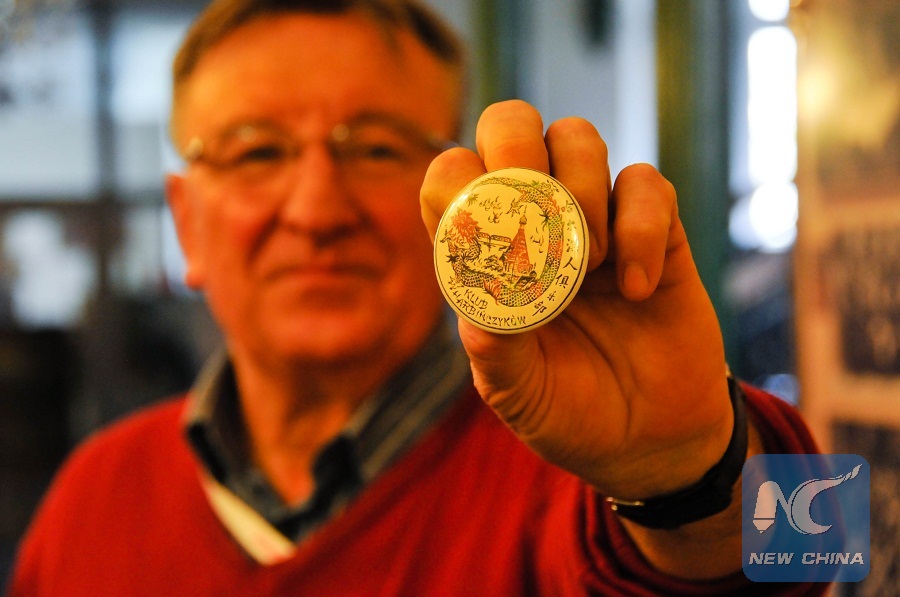 Romuald Oziewicz, chairman of the Polish Harbiners Club, shows the badge of his club on April 8, 2017. (Xinhua/Shi Zhongyu)

SZCZECIN, Poland, April 9 (Xinhua) -- " Our parents instilled the love for Harbin in our hearts," Romuald Oziewicz, chairman of the Polish Harbiners Club in the Polish city of Szczecin, said recently.

Between the 19th and 20th century, a large community of Poles lived in the northeast of China, particularly in the city of Harbin. A recent exhibition held in the Central Library of the West Pomeranian Province in Szczecin, has brought back the memory of those people and their life with hundreds of documents and photographs.

The exhibition "Poles in Manchuria 1897-1949" prepared by the Archives of Modern Records will last from March 23 to April 28 and later be held in Gdansk and Warsaw.

Oziewicz was born in 1950 in Harbin and left China together with his family later. He introduced to Xinhua the Polish marks in the city of Harbin.

How did the Poles get into Harbin? Oziewicz said around in the year 1897, the decision to construct Chinese Eastern Railway made by then Russia Empire attracted workers of Polish origin. In addition, a large number of Poles fled from Siberia to China.

The Polish community coming to Harbin consisted mostly of well-educated intellectuals, said he.

Out of around 800 people who went back to Poland in 1949, around 500 lived in Szczcin. That was why the Harbiners Club has been most active here, Oziewicz said. Nowadays, there are around 30-40 active members of the club, some of whom are already the second generation, cultivating the memory of Harbin left by their parents.

Oziewicz said many people who lived in Harbin used to say that first they are Harbiners and then Poles. He added that everybody recalled Harbin as a great place to live where local people were warm and friendly. "Now when parents are gone, we have to keep this memory," said Oziewics.

Every year the Polish Harbiners Club organizes events and celebrates anniversaries related to the Poles in Harbin. The club members went to Harbin in 2015 at the invitation of the city authorities. They are also planning to take part in the world Harbiners' summit this year.