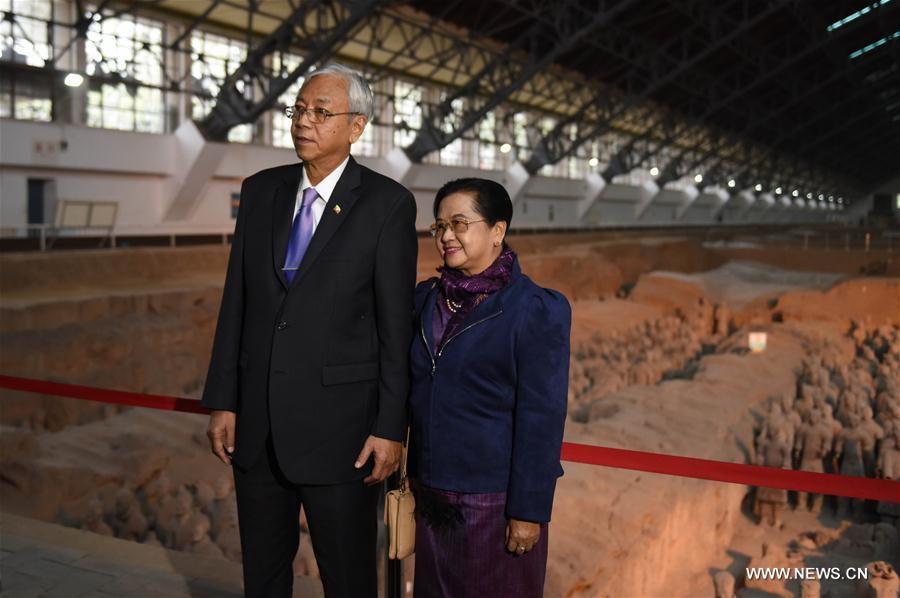 Myanmar President U Htin Kyaw and his wife pose for a photo while visiting the Terracotta Warriors in Xi'an, capital of northwest China's Shaanxi Province, April 7, 2017. (Xinhua/Liu Xiao)

XI'AN, April 7 (Xinhua) -- Myanmar is studying how to participate in the Belt and Road Initiative, as an increasing number of countries are taking part, according to the Myannmar president.

President U Htin Kyaw made the remarks Friday during his visit to Xi'an, capital city of northwest China's Shaanxi Province.

Xi'an is the starting point of the ancient Silk Road, and home to the world-famous Terracotta Warriors.

Shaanxi is also a core area for the Belt and Road Initiative, which was proposed by China in 2013 with the aim of building a trade and infrastructure network connecting Asia with Europe and Africa, along and beyond the ancient Silk Road trade routes.

U Htin Kyaw, who visited the Terracotta Warriors on Friday afternoon, expressed hope of enhancing cooperation with Shaanxi in areas such as trade and vocational training.

The Myanmar president, currently on a six-day visit to China from April 6 to 11, is accompanied by a delegation of over 30 members, including ministers from the country's commerce and construction departments.