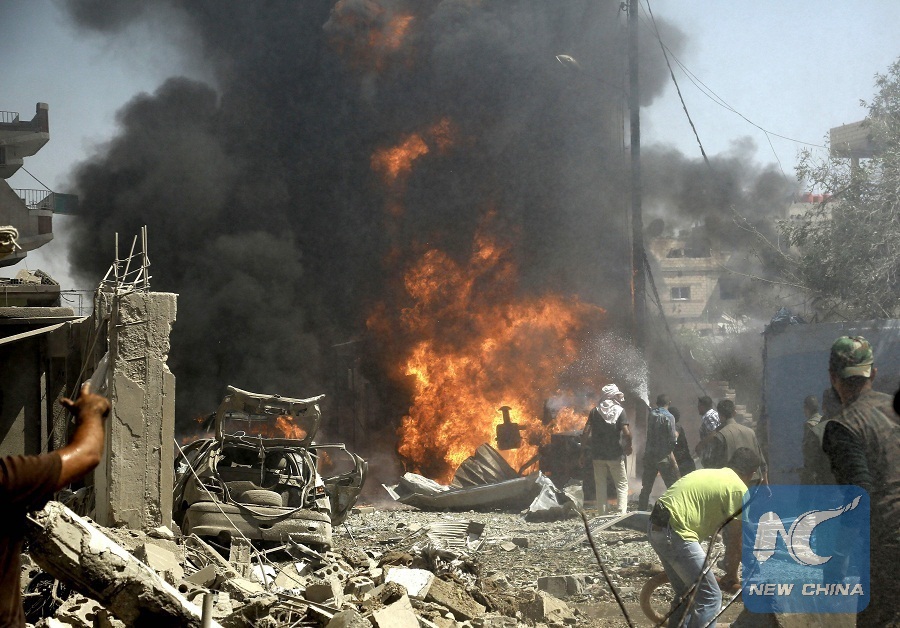 DAMASCUS, April 4 (Xinhua) -- The Syrian Foreign Ministry said Tuesday that the Syrian army doesn't have any kind of chemical weapons.

The ministry blasted in a statement as completely baseless reports accusing the Syrian air force of carrying out a toxic gas attack on the rebel-held town of Khan Sheikhoun in the country's northwestern province of Idlib earlier on Tuesday.

The Syrian Observatory for Human Rights said 58 people were killed and tens of others wounded by the attack.

The ministry stressed that "the Syrian army doesn't possess chemical weapons and hasn't used them before in any Syrian city."

Meanwhile, Syria's Deputy Foreign Minister Faisal Mekdad told pan-Arab Mayadeen TV that the rebels who are supported by France, Britain, Turkey, and Saudi Arabia were the ones carrying the chemical attack in Khan Sheikhoun.

He also said that his country has fulfilled all of its commitments toward the Organization for the Prohibition of Chemical Weapons (OPCW).

The Syrian official also urged the international community to hold accountable the parties behind the attack.

Mekdad noted that the Syrian government had provided information to the OPCW weeks ago about the smuggling of toxic materials by the al-Qaida-linked Nusra Front into northern Syria.

The Tuesday attack wasn't the first reported in Syria, as chemical weapons were said to have taken place in several areas in Syria in the past years, with the government and the rebels trading accusations.

As many as 1,400 people were killed when several opposition-controlled areas in the suburbs around Damascus were struck by rockets containing chemical agent sarin on Aug. 21, 2013. Both the opposition and the government traded accusations.

In the same year, a chemical attack hit the then government-controlled town of Khan al-Asal in the countryside of Aleppo, in which several Syrian soldiers and civilians were either killed or suffered from suffocation. The government accused the rebels, who, in turn, denied the accusation.

In October 2013, the OPCW officials arrived in Syria to monitor the dismantlement of the Syrian chemical weapons arsenal, after Damascus officially joined the Prohibition of Chemical Weapons Convention.

The OPCW later said that the government has made its chemical weapon production facilities inoperable.

The dismantlement of the Syrian chemical weapons was due to a U.S.-Russian understanding, the first sign of a consensus between both powers on the Syrian conflict.

Since then, reports of poisonous gas attacks kept emerging once in a while.