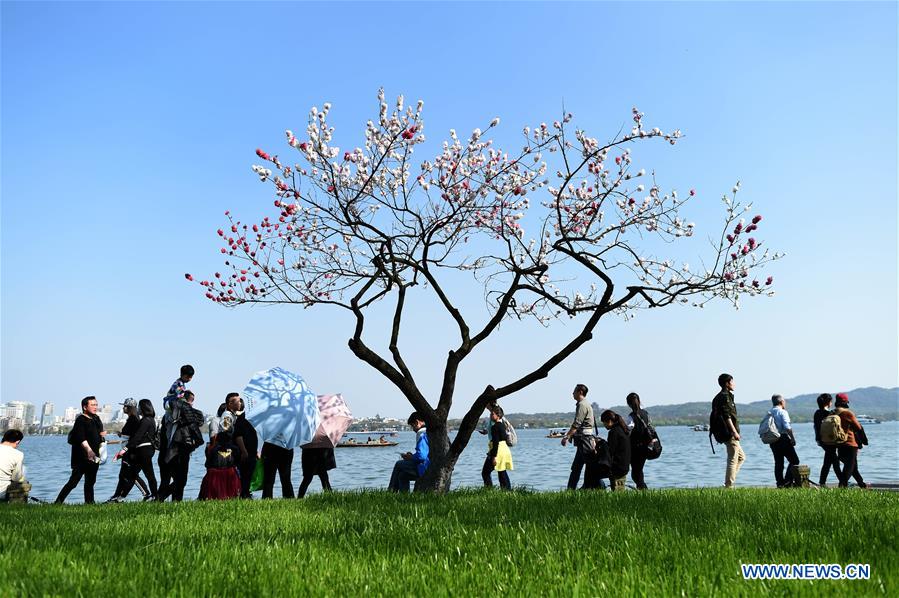 Tourists stroll along the West Lake during the Qingming Holiday in Hangzhou, east China's Zhejiang Province, April 2, 2017. Chinese are having the Tomb-sweeping Day holiday, or Qingming, from Sunday to Tuesday. (Xinhua/Han Chuanhao)

April 4 marks this year' s Qingming Festival in China. Qingming, literally meaning "clear and bright" , is one of the 24 dates that divide the solar year on the traditional Chinese calendar. The day heralds a season of rising temperature and increasing rainfall, high time for plowing and sowing.

As a festival, Qingming is believed to have a history of about 2,500 years and Chinese people have since developed colorful traditions. The most important tradition of Qingming is to honor ancestors and commemorate deceased family members and relatives, usually at their grave sites. Thus, Qingming is also translated into Tomb-Sweeping Day in English.

A traditional memorial ritual includes praying, cleaning the tombstones and burning offerings to the dead, usually paper money, paper clothes and paper houses. Today the list might include a paper iPhone.

It is believed that the tradition of sweeping tomb during Qingming was started by an ancient duke, Chong' er, to pay tribute to an loyal retainer who cut his thigh meat to feed the master during their exile years. The retainer, Jie Zitui, secluded into a forest after Chong' er became the Duke. The Duke couldn' t find Jie in the forest and ordered to set fire in an attempt to force him out, but Jie and his mother were burnt to death instead. The remorseful Duke then ordered memorial rituals for the man.

The tomb-sweeping tradition offered ancient poets an occasion to express their sentimentality, such as Du Mu of the Tang Dynasty (618-907). In his famous poem Qingming, he wrote:

A drizzling rain falls like tears on the mourning day; The mourner' s heart is going to break on his way. "Where can a wine shop be found to drown my sad hours?" A cowherd points to a cot amid apricot flowers.

However, Qingming is not all about sad sentiments. Flying kites is enjoyed by many people, young and old, during the Qingming Festival. Swinging is another activity for children. A special food for the festival is called qingtuan, or sweet green rice balls made from glutinous rice soaked in and colored by green plant juice and stuffed. In addition, people believe that eating an boiled egg on Qingming will bring good health for the year. Some people also draw paintings on the boiled eggs before eating them. Another folk custom is to knock boiled eggs against each other for fun.

Actually, one of the most important and long-lasting customs of Qingming is "taqing" , meaning spring outing, as this is the time when the sun shines soft and bright, the trees and grass become green and flowers blossom. Today, Qingming is a national holiday.

Some traditions of Qingming have brought problems, say, traffic jams and air pollution or even forest fires caused by firecrackers and paper money burning. As part of a greener Qingming campaign, people have been encouraged to pay tribute to their ancestors and deceased beloved ones online, or burn less or no paper money.