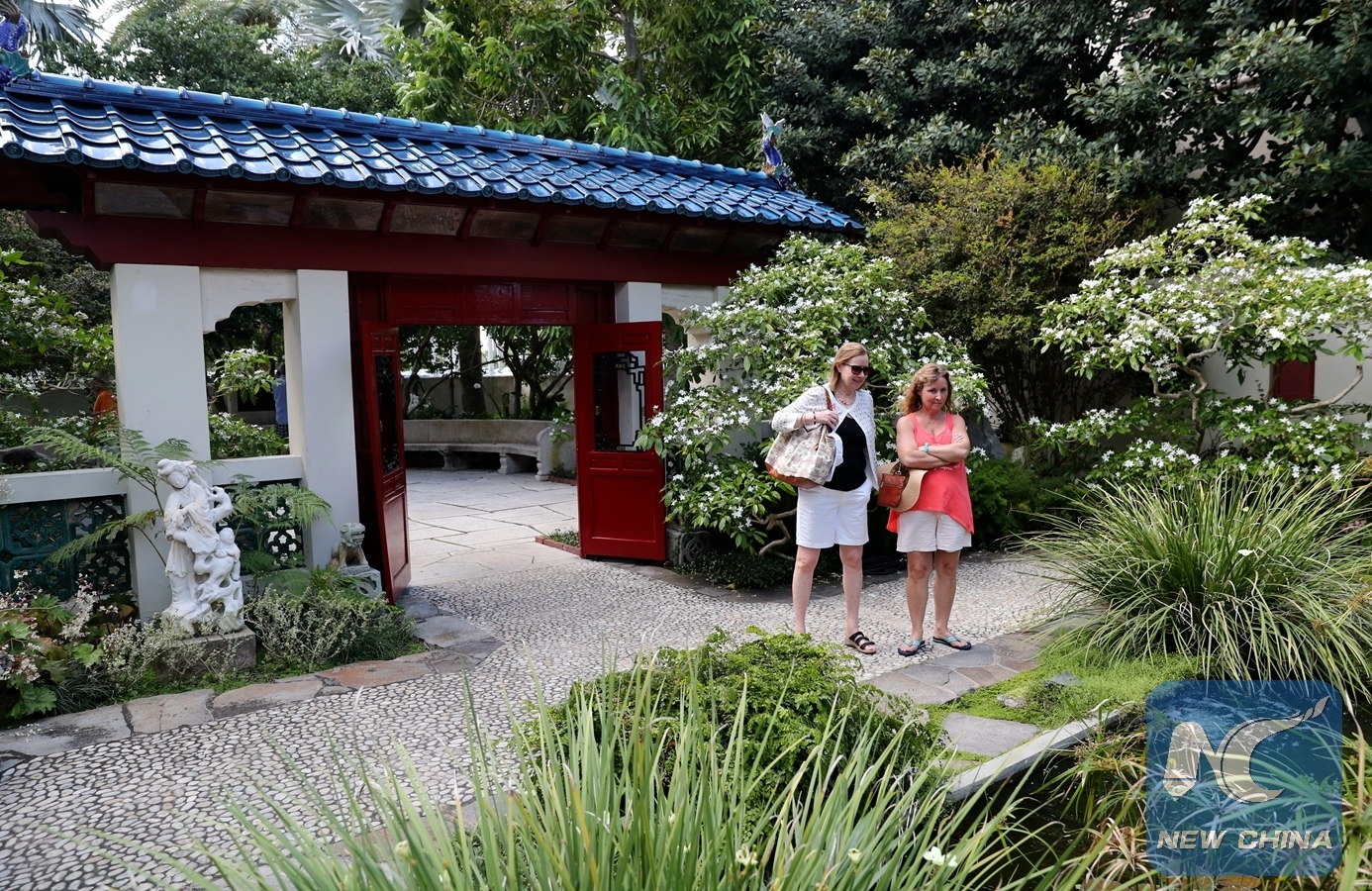 This is the Chinese garden at the Palm Beach. The garden is equipped with almost everything a Chinese garden is supposed to have: stone lions, the statuette of Kwan Yin (the Buddhist Goddess of Mercy), and various plants that automatically connote China (Xinhua Photo/Wang Ying)

PALM BEACH, the United States, April 1 (Xinhua) -- Sitting at the center of Palm Beach island, surrounded by mansions, golf courses, and boutique hotels, a red-lacquered archway with blue eaves leads visitors to a small tranquil garden. I Ho Yuan, says the plaque on it.

The name suggests China's Summer Palace, a famous vast ensemble of lakes, gardens and palaces in Beijing, which was built in 1750 as a resort for Chinese emperors back in the Qing Dynasty.

Apart from the archway, the garden is equipped with almost everything a Chinese garden is supposed to have: stone lions, the statuette of Kwan Yin (the Buddhist Goddess of Mercy), and various plants that automatically connote China.

This is the Chinese garden at the Palm Beach's the Society of the Four Arts -- its botanical gardens. Since being built in 1938, the botanical gardens designed by Mrs. Lorenzo Woodhouse have served as a guide for new homeowners seeking inspiration for landscaping their own houses. They give visitors a whole range of plants that can thrive locally.

Given the fact that only less than 1 percent of the town's population is Asian, a garden like this stands out in its neighborhood. Only a five-minute drive away, at Norton Museum of Art in West Palm Beach, a permanent Chinese exhibition is also impressing its visitors.

"In the Chinese culture, dragons can bring good luck, they are not scary," said Laurie Barnes, curator of the museum's Chinese art exhibition in her 60s.

She was explaining patiently to a group of visitors, most of whom were kids, in front of a roof ridge with dragon images on it. The panels are made of earthenware, decorated with amber, the eyes of the dragon glaring in the sun.

Speaking to the kids, Barnes compared the dragons to "puppy dogs playing with flaming jewels", which almost immediately brought the school-aged children intimacy with this legendary beast from the Far East.

"This is my kids' first time to see this type of exhibition in a museum, I think they are enjoying it, the dragons are cool for my son," said Fabiola Williams, a young mother visiting with her two kids, a boy and a girl.

The museum's collection of Chinese art has grown from 125 works acquired by Ralph Norton, founder of the museum to about 600 objects, which range from delicately-carved jade, paintings, Buddha statues, and a few porcelain pieces.

Barnes said the exhibition came into being because Norton wanted to represent something other than Western art, and he chose to focus on Chinese things.

The collection is not large, but specialized and meticulously arranged. In a city that is traditionally American, the blue and white porcelains from Chinese kilns seem exotic and refreshing at the same time.

Without much knowledge of the usage and history of these items, visitors stop by the display window to take a closer look.

Norton museum also holds special Chinese cultural exhibitions from time to time. Barnes said she used to spend three years on an exhibition on ceramics connected with tea, elaborating the impact of tea as well as ceramics. It aroused interest among many visitors.

"There are still people coming up to the entrance desk and saying: 'Who did that exhibition? I'll never forget it. It was one of the greatest exhibitions I've ever seen,'" said Barnes, whose eyes were filled with pride and gratification.

The museum has also celebrated some traditional Chinese festivals with corresponding programs, like the Mid-Autumn Festival and Chinese New Year.

Scott Benarde, the museum's director of communication, told Xinhua that over 2,000 people came in one day for Chinese New Year last time, while 600 or 700 people came for the Mid-Autumn Festival.

"Art and music are a way for people who don't speak the same language or maybe believe in the same thing to bond or to get to know one another," said Benarde.

"It's hard not to walk into our Chinese collection and look at that giant head of a Buddha, and just not be awed and thrown, no matter who," he added.

Like the pot cultures thriving in the South Florida climate, these exquisite Chinese art pieces are taking root in the exhibition hall, nourishing culture lovers with the aesthetics of an ancient nation far away.

And with the love and passion for Chinese art, the likes of Barnes are treating their jobs as a "life's mission."

"I tell people that the 20th century is the American century, the 19th century was the British century, but the 21st century is gonna be the Chinese century," she said on a bright day, at the museum's courtyard, where visitors passed by from time to time, taking a break from their tour.

"So I think everyone in the world should be interested in Chinese culture because it's China's time," she added.