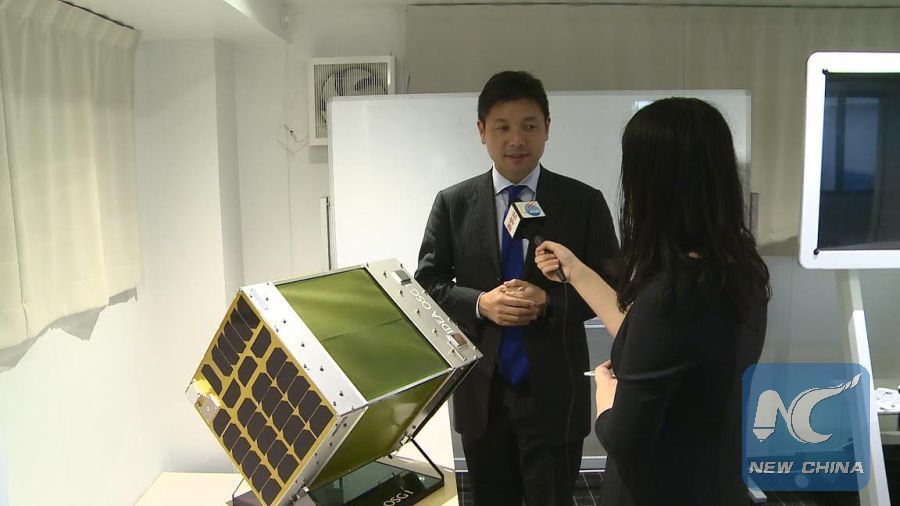 Mitsunobu Okada, founder of a space garbage collecting company, in an interview with Xinhua in the company's Tokyo office March 14, 2017. (Xinhua/Deng Min)

TOKYO, April 1 (Xinhua) -- About four years ago, with no engineer, no knowledge about space engineering, no connection to the space agencies and not so much money, Mitsunobu Okada started a space garbage collecting company, undertaking the world's most difficult cleaning job.

Okada said it is all because of a handwritten message "Space is waiting for your challenge" by Mamoru Mori, Japan's first astronaut whom he met in 1988 during a camp at NASA's Marshall Space Flight Center in Alabama, the United States.

With debris in the endless space as his cleaning object and satellites as his tools, Okada said he had never imagined the challenge would be so formidable.

"I was running an IT company for more than 10 years, and when I turned 39, I was wondering what I should do during my 40s."

Okada said he encountered a midlife crisis before starting the company in 2013 during a recent interview with Xinhua in the company's Tokyo office.

The message by Mori reignited his passion for space when he was wandering in his life. After attending various conferences and forums and finding out that there were only concepts and researches on the growing threat of space debris and no concrete actions about it, he felt frustrated and decided to devote himself to space cleaning.

Space debris comes from asteroids, comets, meteorites and also defunct man-made space devices or their parts. "Dead" satellites are an example of space debris, which poses increasing risks to functional satellites and the International Space Station. Mitsunobu Okada, founder of a space garbage collecting company, in an interview with Xinhua in the company's Tokyo office March 14, 2017. (Xinhua/Deng Min)

Experts believe there are more than 23, 000 large space debris and countless small ones which travel very fast. A collision with even a tiny fragment can be disastrous at orbital speeds.

Okada said if human beings don't address the problem soon, the Kessler Syndrome would happen in two decades to two hundred years at most.

Kessler Syndrome is proposed by Donald Kessler, a pioneering space debris researcher and a former NASA astrophysicist, in 1978. He said if the objects in low-earth orbit reached a high enough density, debris generated by one collision would lead to another and eventually fill space with small, fast-flying junk, making all space activities impossible.

"It is a consensus we have to remove large debris now before they become smaller particles," Okada said, adding that his company will launch IDEA OSG1 toward the end of this year or early next year to monitor and collect information of the small debris.

Okada said they are developing key technologies to approach the large debris which mainly consists of abandoned rocket upper stage bodies as well as decommissioned satellites, and then capture and deal with them. The microsatellite named ADRAS1 featuring these technologies will be launched in early 2019.

When asked what the advantages of his company's products are, Okada felt shy to talk about it as he believes everything is not perfect and they have to do more to provide affordable services. "There is no advantage. Maybe the only one is that we are so obsessed with suitability. That's the key core advantage of us," Okada said.

Astroscale now has a team of 25 people who call themselves space sweepers. At the supporter section of the company's home page, people can see the photos of the space sweepers holding banners that read "Go, sweep the Galaxy" "Bye Bye, space debris" "We are living in one space. Let's make it clean and keep it clean". Everyone is smiling and everyone seems hopeful for this cause.