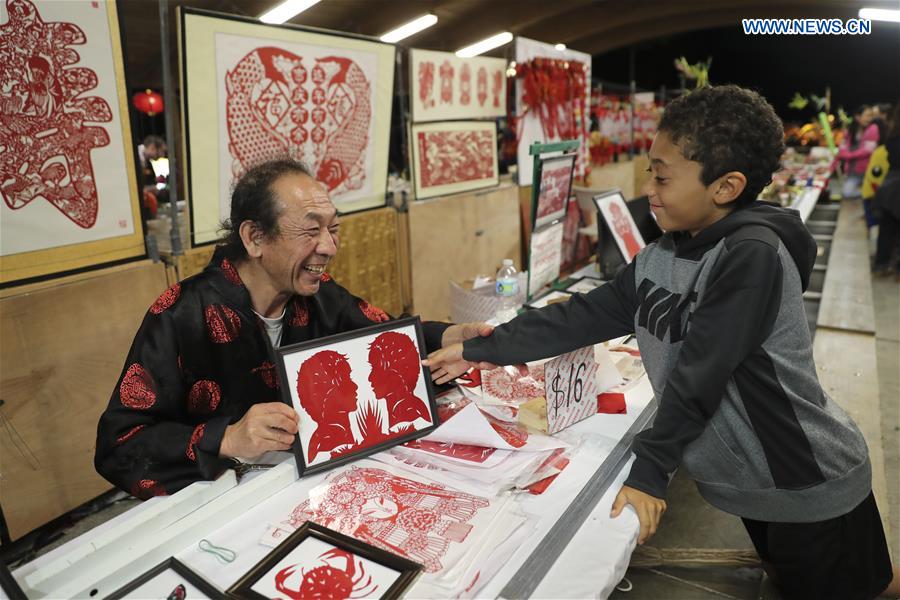 Li Baogui, a paper cutting artisan, hands an artwork to a kid during a lantern festival held at Sunset Cove Amphitheater in Boca Raton, Florida, the United States, March 24, 2017. Sugar drawing, a traditional Chinese folk art using hot caramel to create two-dimensional figures, is among many folk skills on display from Feb. 24 to April 9 at the Chinese Lantern Festival in the Palm Beach County, a paradise for holiday makers in South Florida. (Xinhua/Wang Ying)

BOCA RATON, United States, April 2 (Xinhua) -- At a booth at Sunset Cove Amphitheater, a football-pitch-sized outdoor venue in Boca Raton, a small city in the U.S. southern state of Florida, Li Jun, in his casual Tang suit of traditional Chinese style, was drawing a caramel dragon on his iron pad on a March day.

With a spoon in hand, he swirled his wrist above the pad, carefully contouring this auspicious animal in Chinese culture, before pressing a bamboo stick on it and shoveling the whole thing off the pad. Complicated as the dragon shape appeared to be, it took Li only about three minutes to finish.

"If I am about to hold a party this time next year, can I invite him to do this for my guests?" a middle-aged lady only identified as Jennifer, who just took a one-hour drive here, asked a volunteer translator, with her eyes still fixating on the dragon.

Sugar drawing, a traditional Chinese folk art using hot caramel to create two-dimensional figures, is among many folk skills on display from Feb. 24 to April 9 at the Chinese Lantern Festival in the Palm Beach County, a paradise for holiday makers in South Florida.

Most of the artisans travelled to the United States from China's Hebei Province. This is their second stop, after Virginia. They have brought paper cutting, dough modeling and straw weaving, all across the Pacific.

Just a few steps away, a clay sculpture artist was also surrounded by dozens of local visitors, who, almost in astonishment, observed him finishing the sculpture of two kids sitting in front in just 15 minutes.

Tonya Scholz, who works for the festival, told Xinhua that she was surprised the Chinese artist can do this so perfectly for just 50 U.S. dollars.

"When I see him working on someone, I recorded, because it is incredible," she said. "I do a Facebook Live, and all my friends love it."

Walking out of the booths, the visitors went on enjoying a dazzling array of illuminated lanterns, designed into the shape of animals, plants, and architecture.

"On a good day, we can have 3,000 visitors coming over," said George Zhao, president of Hanart Culture, sponsor of the event. "It's a family event, entertaining for the young, as well as the senior."

This year's theme, "The Wild," offers a safari of lanterns with animals from different parts of the planet, dinosaurs, cheetahs, lions and dears. The color and fabric were elaborately chosen, creating a paradise of lights about one hour away from Palm Beach, a longstanding resort destination for the wealth in the United States.

On the other side of the venue, the visitors were fascinated by a Kung Fu, or martial art show on stage. The word "bravo" constantly burst from the audience with the deft move of Kung Fu masters, and their true-to-life imitation of various animals.

"I would say as an exotic, special culture, Chinese culture is well received here," Zhao told Xinhua from his experience of organizing Chinese art festivals in several cities across the United States and Canada in recent years.

"For the Kung Fu show for example, we have a teaching session," he said. "And some times, there were just so many people that we couldn't manage to have everyone in the space off stage."

"This year marks the 46th anniversary of China-U.S. Ping Pong Diplomacy and we have something special arranged on April 7," Zhao told Xinhua.

In 1971, the Cold War was still going on, and Ping Pong, or the table tennis called in the West, came into play as an unexpected diplomatic tool between the United States and China. Some U.S. table tennis teams arrived in China for a 10-day visit, which had led to a dialogue between the two countries.

The event marked a thaw in Sino-U.S. relations and paved the way for the ice-breaking visit by then U.S. President Richard Nixon to China.

"We have invited some Olympic players for a party," Li said. "And we would also have a real-time conversation with Ping Pong players who travelled with Nixon then."

Linda Hamburger, an American who works for the Chinese Lantern Festival, gets very excited about the upcoming event marking the Ping Pong Diplomacy, as she is, in her own words, "a die-hard Ping Pong fan".

At the age of 10, she was amazed that a small ball could somehow lead to a thaw of the tense relations between China and the United States. That's when she started to learn about the country half a globe away.

"Sometimes our politics differ, but I think our day-to-day lives are very surprisingly the same," she said.

Zhao hoped the events of this kind could promote the understanding between the two countries, and could spread the best of Chinese culture to a wider audience.

"Anyway, dialogue is a way better than confrontation, and understanding can certainly do more than misunderstanding," he said, looking towards the lights stretching all the way into the cove's night.