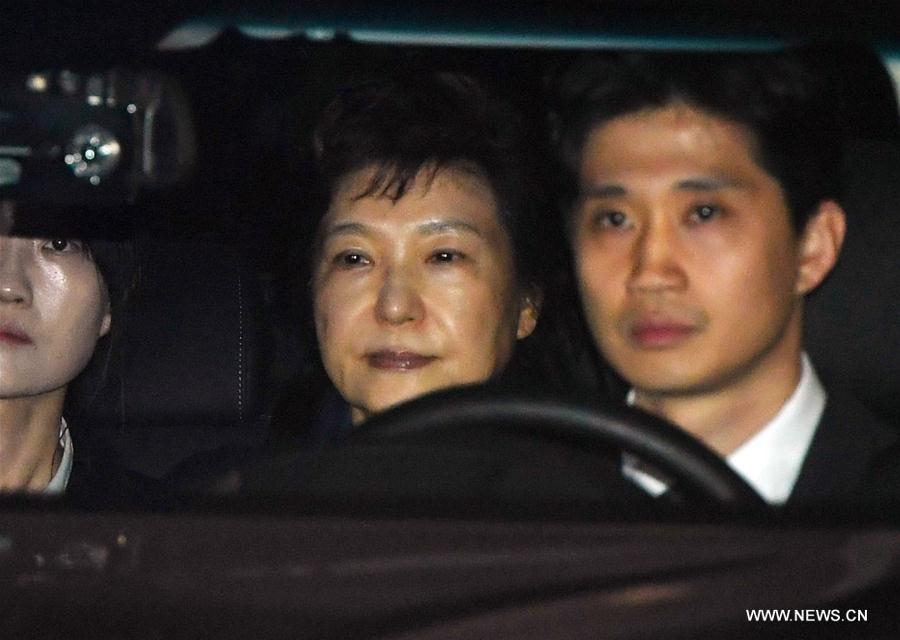 SEOUL, March 31 (Xinhua) -- Former President Park Geun-hye of South Korea was arrested early Friday after a court approved the request from prosecutors, raising a possibility for her to serve jail term over corruption allegations.

A judge in the Seoul Central District Court said in a statement that Park's major criminal allegations could be justified and concerns remained over a possibility of her destroying evidence.

The arrest warrant for Park, which was sought by prosecutors earlier this week, was issued by the court, following the Thursday hearing that had lasted for nearly nine hours, the longest-ever in the country's history.

Park had waited overnight for the court's decision in the Seoul Central District Prosecutors' Office, a building next to the Seoul court.

The 65-year-old was seen flanked by two female investigators inside a black sedan, TV footage showed, when she was moved to a detention center outside Seoul, about 15 km away from the prosecution office.

The sedan was escorted by security cars and police motorcycles, trailed by a number of vehicles loaded with local media cameramen. Park went to the detention center at about 4:45 a.m. local time.

A slew of Park supporters were awaiting Park's arrival near the detention center as if they also expected the arrest of the former leader, who had been viewed as a political icon among conservative voters.

Park left the presidential Blue House after his father Park Chung-hee, who had ruled the country for 18 years, was assassinated in 1979 by one of his closest aides. She re-entered the office in early 2013 after being elected the first female president of the country, but she failed to fulfill her five-year term and left the office in disgrace.

The Constitutional Court removed Park from office in a historic ruling on March 10, making Park the country's first president to be ousted by impeachment.

After a brief physical check-up, Park was supposed to change into prison garb and be sent to a solitary cell in the detention center, according to local media reports.

The detention center already accommodated Park's longtime confidante Choi Soon-sil, who is at the center of the corruption scandal that led to Park's impeachment, and Samsung Electronics Vice Chairman Lee Jae-yong over bribery charges.

Park became the third former president to be taken into custody. She will be held in detention for as long as 20 days while being investigated further by prosecutors.

The detention itself does not guarantee Park's conviction, but it raises a possibility of being sentenced to a prison term. If convicted of bribery, Park would face an imprisonment of at least 10 years.

Park is to be indicted before the end of the 20-day detention period on a total of 13 charges, including bribery, abuse of authority, coercion and the leakage of confidential documents.

She is accused of colluding with Choi to receive tens of millions of U.S. dollars in bribes from Samsung's Vice Chairman Lee.

The bribes were offered in return for getting assistance in the transfer of management control of Samsung Group to Vice Chairman Lee from his ailing father Chairman Lee Kun-hee.

The younger Lee, an heir apparent of the country's biggest family-controlled conglomerate, has effectively taken the helm of Samsung since Chairman Lee was hospitalized after a heart attack three years ago.

Choi is charged with extorting tens of millions of dollars from scores of conglomerates to establish two non-profit foundations she used for personal gains. Prosecutors already branded Park and Choi as criminal accomplices.

Choi, at the center of the influence-peddling scandal, is also suspected of receiving secret government documents from one of Park's former secretaries on a regular basis to meddle in state affairs behind the scenes.