News Analysis: Trump could put off healthcare reform for some time to come 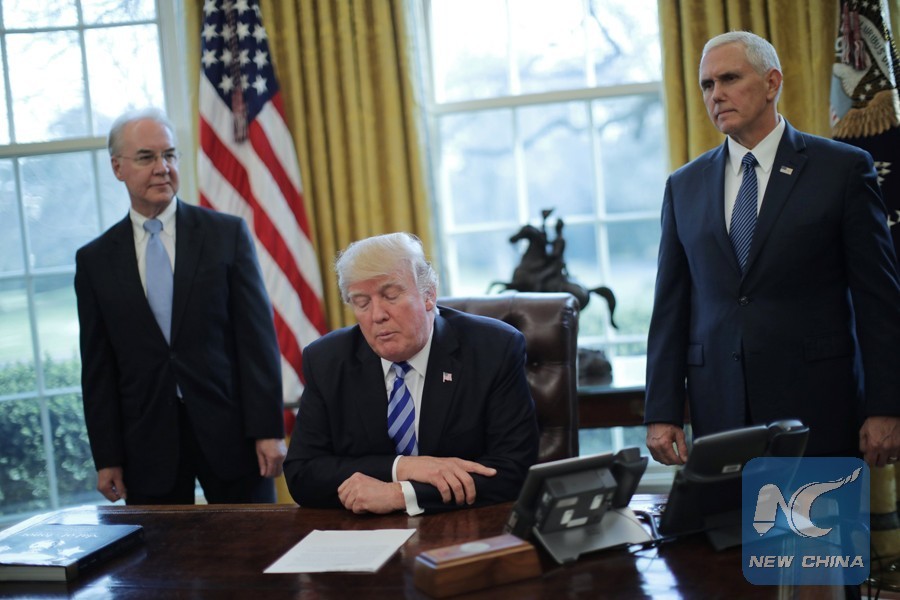 WASHINGTON, March 30 (Xinhua) -- U.S. President Donald Trump may not tackle the nation's healthcare system for some time to come, after the GOP failed to pass legislation last week.

Trump said in recent days he was disappointed that the House Freedom Caucus - a group of conservative Republicans - blocked healthcare legislation that the New York businessman-turned-president had wanted to pass through Congress.

Repealing and replacing former President Barack Obama's health care reforms, known as Obamacare, was one of Trump's main platforms during his campaign, as the law is unpopular with millions of his supporters for numerous reasons, including high costs to policy holders, as well as fines for not purchasing healthcare.

But now, with this legislative setback, some experts said the issue might not be back up for debate for some time.

"For the foreseeable future, Trump's agenda will now focus on the goals of tax reform and infrastructure investments as well as avoiding the remote risk of a government shutdown in April," Dan Mahaffee, senior vice president and director of policy at the Center for the Study of Congress and the Presidency, told Xinhua.

"Since there is no path for a repeal plan that would satisfy moderate Republicans or highly conservative House Freedom Caucus, health care will likely be tabled until after 2018, or even later," Mahaffee said.

The issue with that is that neither the GOP or Democrats will have the appetite to make any small fixes that the law might need before then, Mahaffee said.

With this change in plans, many Americans will face the status quo. There will be less of a concern about loss of coverage, but affordability will be an issue at both the micro- and macro-levels, he said.

Still, some experts said the GOP still needs to pass a new law because money for Trump's planned tax reform was supposed to come in part from tax savings after the repeal of Obamacare, which has levied a number of taxes on the country. So he can't pass tax reform without repealing Obamacare, some argue.

Experts also noted that the GOP had 7 years to come up with a bill to replace Obamacare, and the party's failure to do so is damaging their image and could eventually cause the party to lose credibility.

Others said if lawmakers continue to fail to pass new healthcare legislation, it could put members of Congress in hot water with their constituents, and voters could ultimately boot them out of office in the midterm elections.

Absent replacing Obamacare entirely, Trump does have some options.

"Trump can scale back Obamacare through executive orders and lax enforcement. He can grant waivers to states that exempt them from particular provisions. Those activities could undermine the policy and make it difficult for the program to be effective," Darrell West, vice president and director of governance of the Brookings Institution, told Xinhua.

"He already has stopped advertisements for Obamacare, which will reduce sign up rates," West said.

Some observers said the GOP was good at pointing out what was wrong with Washington when a Democrat was at the helm, and that the party needs to learn to govern better.

Republicans are having problems governing because they are not united on basic principles. This was a problem on healthcare and will be a challenge on tax reform and infrastructure development as well, West said.

Obamacare is controversial. Many Americans said it has helped them get insurance, as the law made it illegal for any insurance company to deny coverage for pre-existing conditions.

Other Americans, however, said they have been harmed by Obamacare, as it requires people to purchase insurance - which is often expensive, despite promises of cheap healthcare - or pay a fine.