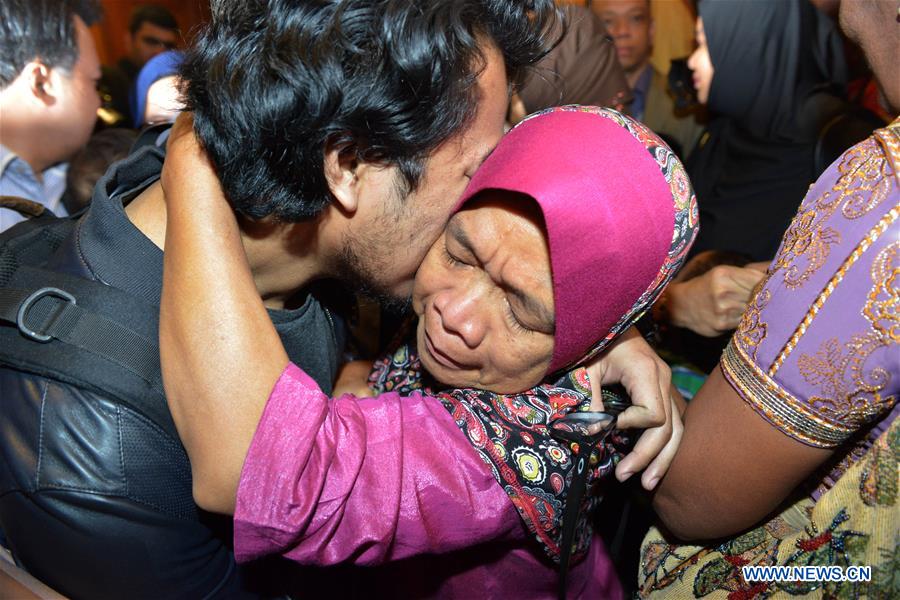 Stranded Malaysian citizens in DPRK arrive at an airport in Kuala Lumpur, Malaysia, on March 31, 2017. DPRK said late Thursday it has reached an agreement with Malaysia on the dispute over the death of a DPRK national in Kuala Lumpur last month. (Xinhua/Chong Voon Chung)

PYONGYANG, March 30 (Xinhua) -- The Democratic People's Republic of Korea (DPRK) said late Thursday it has reached an agreement with Malaysia on the dispute over the death of a DPRK national in Kuala Lumpur last month.

In a joint communique issued by the Malaysian and DPRK negotiating parties, Malaysia has agreed to transfer the body of the deceased to his family after the latter produced all the required documentation.

"Both countries also agreed to lift the ban imposed on citizens of the other country and guarantee safety and security within their respective territory," said the communique carried by the Korean Central News Agency.

"This would allow the nine Malaysians presently in Pyongyang to return to Malaysia and DPRK citizens in Kuala Lumpur to depart Malaysia," it said.

The DPRK and Malaysia were plunged into a dispute over the death of a DPRK national in Kuala Lumpur on Feb. 13 at the city's airport.

The DPRK said Malaysia tried to hide the truth of the incident while Malaysia accused the DPRK of being behind in the mysterious death.

Both countries banned the citizens of the other side from leaving their country after Malaysia expelled the DPRK ambassador late February. The DPRK then declared the Malaysian ambassador in Pyongyang persona non granta.

In Kuala Lumpur, Malaysian Prime Minister Najib Razak said in a statement: "Following the completion of the autopsy on the deceased and receipt of a letter from his family requesting the remains be returned to North Korea (DPRK), the coroner has approved the release of the body."

Najib also wrote later on Twitter that the "diplomatic crisis (with Pyongyang) is over".

Malaysian media reported the body of the deceased DPRK national was put on board a Malaysian Airlines plane Thursday which left Kuala Lumpur.