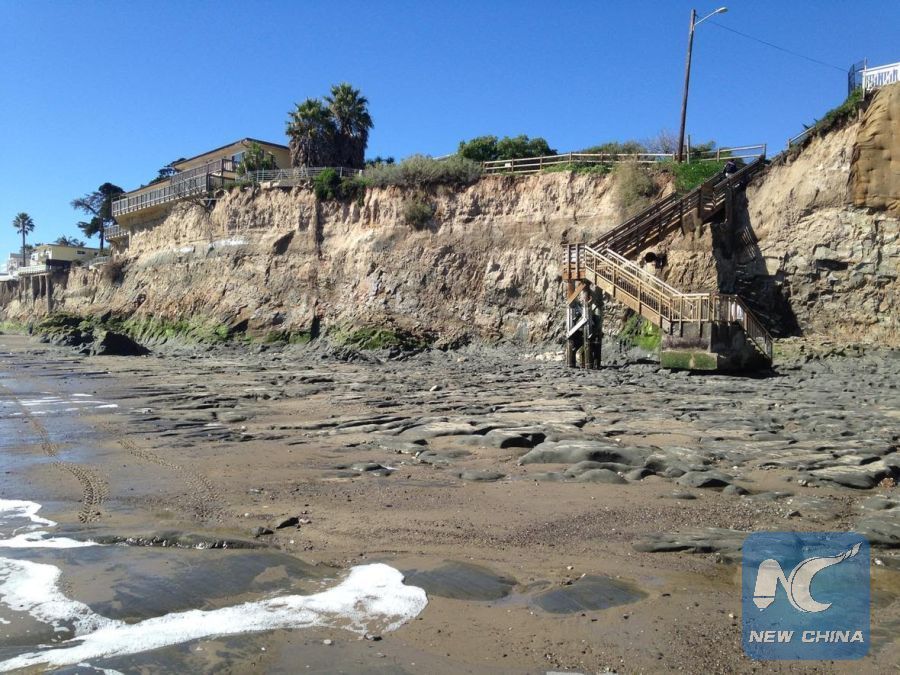 LOS ANGELES, March 29 (Xinhua) -- Using a new computer model, U.S. scientists predict that 31 to 67 percent of Southern California beaches could be severely damaged by rising sea levels by the year 2100.

According to a new study, published online by the American Geophysical Union in their Journal of Geophysical Research, predictions of shoreline change with limited human intervention indicate that 31 to 67 percent of Southern California beaches may become completely eroded by 2100 under predicted scenarios of one to two meters.

"Beaches are perhaps the most iconic feature of California, and the potential for losing this identity is real. The effect of California losing its beaches is not just a matter of affecting the tourism economy," Sean Vitousek, lead author of the study, said in a statement.

"Losing the protecting swath of beach sand between us and the pounding surf exposes critical infrastructure, businesses and homes to damage. Beaches are natural resources, and it is likely that human management efforts must increase in order to preserve them," said Vitousek, who was a post-doctoral fellow at the U.S. Geological Survey when he conducted this study.

"Beaches in Southern California are a crucial feature of the economy, and the first line of defense against coastal storm impacts for the 18 million residents in the region. This study indicates that we will have to perform massive and costly interventions to preserve these beaches in the future under the erosive pressures of anticipated sea level rise, or risk losing many of the economic and protective benefits beaches provide," said U.S. Geological Survey (USGS) geologist and coauthor, Patrick Barnard.

As greenhouse gas emissions continue to rise, the window to limit global warming below 2 degrees Celsius appears to be closing. Associated projections for sea-level rise generally range near or below 1 meter by 2100.

Coastal communities threatened by sea level rise and heavy storms are particularly hard hit. And according to a 2011 study, sea level rise could displace nearly 190 million people by the end of the century around the world.

Although 72 percent of beaches in Southern California show historical trends of accretion or getting larger, due to large artificial beach nourishments since the 1930s, future predictions indicate that nearly all of the beaches will experience erosion due to accelerated sea-level rise, according to the study.