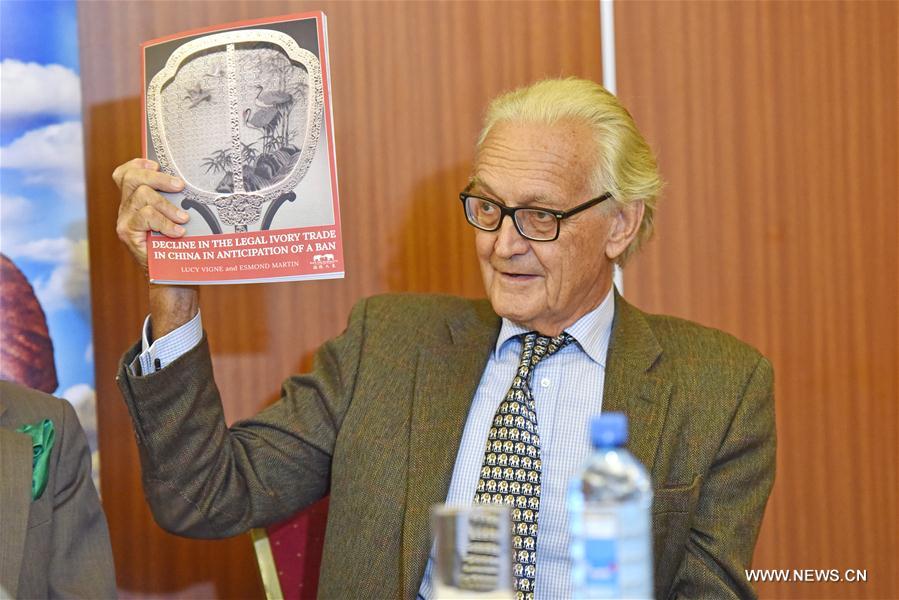 Iain Douglas Hamilton, Founder of Save the Elephants, a conservation organization, displays a report on China's legal ivory trade in Nairobi, Kenya, March 29, 2017. The historic ban on processing and sale of ivory products announced by China on December 31, 2016 could herald demise of elephant poaching in Africa, says a new report by a conservation lobby released in Nairobi on Wednesday. (Xinhua/Sun Ruibo)

NAIROBI, March 29 (Xinhua) -- The historic ban on processing and sale of ivory products announced by China on December 31 2016 could herald demise of elephant poaching in Africa, says a new report by a conservation lobby released in Nairobi on Wednesday.

Save the Elephants' report titled Decline in the Legal Ivory Trade in China in Anticipation of a Ban, says the price of elephant tusks dropped by two thirds in the last three years thanks to negligible demand in affluent societies in the Far-East.

Two researchers from Save the Elephants visited six Chinese cities in late 2015 to gauge the dynamics of ivory trade in the Asian giant ahead of the ban announced late last year.

According to the researchers, the wholesale price of tusks valued at 2,100 U.S. dollars per kilogram in 2014 dropped to 730 dollars in February 2017; two months after China announced a ban on ivory trade.

"This is a critical period for elephants. With the end of legal ivory trade in China, the survival chances for elephants have distinctly improved. We must give China credit for doing the right thing by closing the ivory trade," Iain Douglas Hamiliton, the President and Founder of Save the Elephants, told journalists.

China's bold decision to phase out legal ivory trade injected fresh impetus on efforts to save African elephants from slaughter by criminal syndicates.

Lucy Vigne, a researcher at Save the Elephants noted that licensed ivory retail outlets in China were on the verge of closing their businesses thanks to shrinking demand.

She hailed unrelenting law enforcement by Chinese authorities and public awareness for a slump in ivory trade.

"Law enforcement is key to success. This is already improving in China-we have seen a decline in the number of illegal ivory items on display for sale since 2013," said Vigne.

She warned against complacency that could reverse gains made in the war against poaching of African elephants due to their tusks.

Sub-Saharan African countries lost an estimated 30,000 elephants annually when poaching was at its peak between 2008 to 2013.

Experts hailed China's global stewardship that has contributed to a drop in elephant poaching in the recent past.

Esmond Martin, a researcher with Save the Elephants said that involvement of top Chinese leadership, celebrities and enlightened citizens has given a new lease of life to initiatives aimed at cushioning the giant mammals from threats.