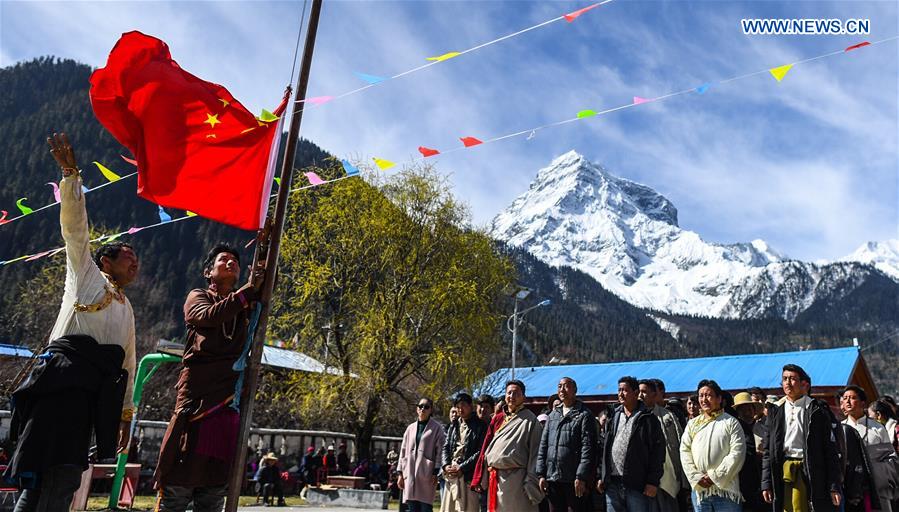 Villagers attend a national flag raising ceremony in Daxing Village of Zhamog Township in Bomi County of Nyingchi, southwest China's Tibet Autonomous Region, March 28, 2017. People here celebrated Serfs' Emancipation Day on March 28, which was designated as the day to mark the freeing of 1 million people, or 90 percent of the region's population at that time, from the feudal serf system in 1959. (Xinhua/Purbu Zhaxi)

"I can proudly say that Tibet is full of vigor like never before. A hundred flowers are in bloom," said Qizhala, chair of Tibet regional government, in a speech to mark the Serfs' Emancipation Day.

March 28 was designated as the day to mark the freeing of 1 million people, or 90 percent of the region's population at that time, from the feudal serf system in 1959.

Qizhala recounted economic, social and religious progress in the past year, during which growth in GDP, fixed-asset investment and per capita disposable income in Tibet ranked first among provincial-level regions nationwide.

"Ethnic solidarity has grown deeper into the hearts of the people. Work has been done to ensure harmony in religious affairs, ceremonies and in monasteries," he said.

On Tuesday, over 3,000 officials, students, retirees and other members of the public gathered at Potala Palace Square in Lhasa for a flag-raising ceremony.

"I learned to sing the national anthem in school. The year after the emancipation, an elementary school was built in my town. I went there, although I was already 13," said Dondrup Gyalpo, who arrived early at the palace for the occasion.

"Young people never have to experience the cruel old times, but it is hard for old folks like me to forget," he said.

When news of emancipation reached Dondrup's hometown in Maizhokunggar County of Lhasa, his family dared not tell the landlords. "We were afraid they may retaliate against us, but we were truly happy to celebrate the end of starvation and insecurity of living under others' roofs," he said.

In Nyingchi to the southeast of Lhasa, the Serfs' Emancipation Day celebrations coincided with a local peach blossom festival. Doje, a 73-year-old retiree, could not resist the urge to dance along with the performers at the opening ceremony of the festival.

"I learned to dance when I started working at the age of 18. I'm in a dance club now, regularly performing for people in the villages," Doje said.

"I watch the young people and think about my childhood, my only memory of which was starvation and endless toiling for the landlords," he said.

"I remember complaining to my mother that I was so hungry that there was no fat on my belly. My mother said, 'Son there is nothing I can do,'" Doje said.

Padain, also a retiree, spent his childhood in a monastery after being sent there by his family. "My parents could not afford to feed me. All my five brothers and sisters went begging," said Padain.

"Monastery life was also harsh. You only could have what people brought you. My robe was crawling with lice," he said.

Padain spent his retirement reading books and playing chess. "I'd like to write down the story of my life, and there is so much to write about," he said.