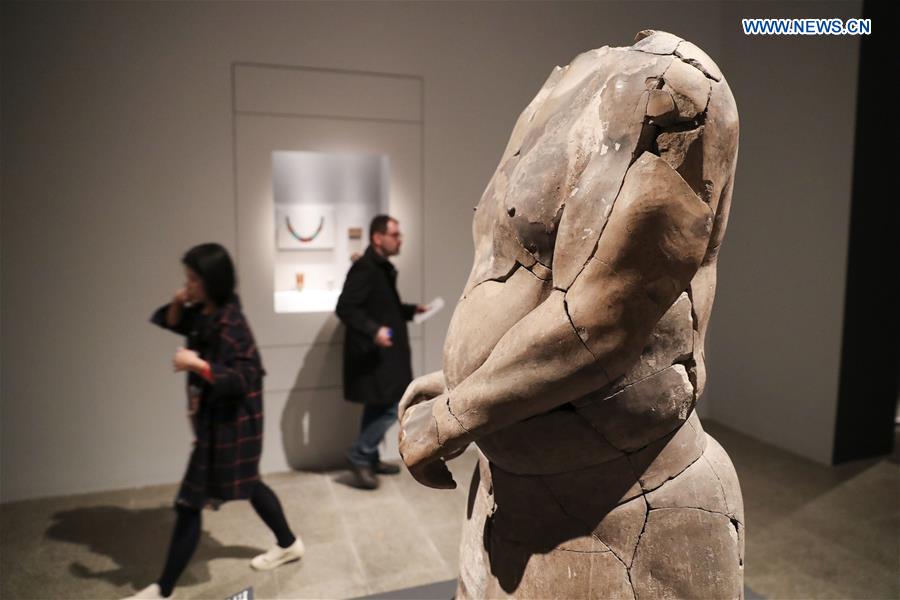 Visitors walk past by an earthenware named "Strongman" during a media preview of the Exhibition of Civilization of the Qin and Han Dynasties (221 B.C.-220 A.D.) in The Metropolitan Museum of Art, New York, the United States. The exhibition featuring more than 160 objects of ancient Chinese art, will be opened to public from April 3 to July 16 in The Metropolitan Museum of Art. (Xinhua/Wang Ying)

NEW YORK, March 27 (Xinhua) -- Imagine a pottery male figure with his upper body naked, revealing his natural and astonishingly accurate anatomy. He wears only a short loincloth, imposing his muscles as a strong man.

Statues like this would probably remind people of Greek or Roman civilization. Yet this figure, dating back to over 2,000 years ago, was unearthed in northwest China's Shaanxi Province, in a pit near the mausoleum of Qin Shi Huang, or the First Emperor of Qin (259 b.c.-210 b.c.).

Now, people in New York have a chance to observe the difference between this "Strongman", as it is called, and famous European sculptures, as Metropolitan Museum of Art (Met) opens to public this year's blockbuster show, Exhibition of Civilization of the Qin (221 b.c.-207 b.c.) and Han (202 bc-220 a.d.) Dynasties, from April 3 to July 16 this year.` Featuring more than 160 objects of ancient Chinese art, this international loan exhibition tells the role of art in creating a new and lasting Chinese cultural identity at the beginning of China's feudal society, stretching back to 221 b.c.

"It probably owes some of its inspiration to the Greco-Roman tradition that would have been introduced into Asia by Alexander the Great in the 4th century b.c.," Mike Hearn, the Met's Douglas Dillon Curator in Charge of the Department of Asian Art, commented on the statue.

That was cultural communication way back in the past. And it is also due to cultural communication, this time between China and the U.S. in the present day, a dazzling array of some extremely rare ceramics, metalwork, textiles, sculpture, painting, calligraphy, and architectural models are drawn from 32 museums and archaeological institutions in China to go on display here.

Alongside the seminude Strongman, visitors can get a direct sense of China's old days. The exhibition not only lets you immerse in a terra-cotta army replica and gives you examples of how rulers of that time tried to bring standard measurement to the whole nation, but also tells the longstanding Chinese philosophy of caring for the old, and aristocracy's persistent pursuit of a happy afterlife.

"It takes you back 2,000 years ago, to the foundation of modern China," says Thomas Campbell, director of the Met.

The Qin and Han Dynasties saw an increase of wealth, a leap in craftsmanship, and blossoming art forms. But of all the achievements in the Qin-Han era, the most significant is probably the emergence of national identity, said Jason Sun, Met's Curator of Chinese Art.

"It is during this time of unprecedented change that people began to see themselves as one," he said. Until this day, the Chinese still call themselves the "Han" people.

Many of the works on display have never been seen in the West before, and they deliver a transformational era of the Chinese civilization to a global audience, as well as the influence of foreign culture thereon.

Take the rarely-seen hanging lamp on the shape of a man for example. If you look closer, you can tell that the face of the man belongs to a foreigner, probably from Southeast Asia. The hanging design points directly to the ancient Mediterranean culture, where hanging lamps are prevalent.

China witnessed increasing maritime trade during the Han Dynasty. The influence is easily reflected on artworks' aesthetics and techniques.

"This landmark exhibition, the largest and most important display of Chinese art in the United States this year, establishes a new milestone in the U.S-China cultural exchange," said Campbell.

"We hope the Chinese and American peoples could come even closer to each other through the bonds of culture," said Chinese Culture Minister Luo Shugang, who was there for the exhibition's opening ceremony.

"We hope it can build a strong ground work for all-range cooperation between the two nations, and the development of China-U.S. relationship," he added.