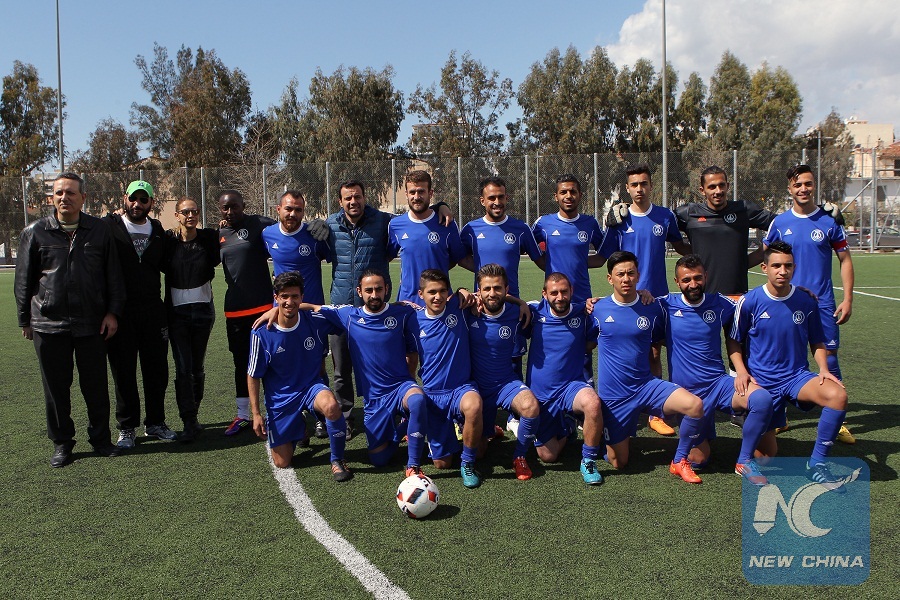 ATHENS, March 27 (Xinhua) -- Over the past four months, 25-year-old Mohammed Wael Saifi left the refugee camps in western Athens three times a week, and joined the other 23 refugees in a soccer court in the heart of Piraeus for training of their team named Refugees' Athletic Hope.

Unlike any other team in Greece, Refugees' Hope is made up exclusively of players who fled war zones in Syria, Afghanistan, Iran, Iraq and Yemen, with an aim of giving the refugee players a sense of purpose.

Wael Saifi used to be a center-striker in a second league soccer team back in his hometown Aleppo, where has seen battles between Syrian government forces and IS rebels.

He said he's happy that he could pick up soccer again in Greece.

"When I left Syria, I was afraid I was going to forget all about soccer and lose this forever, but here I have the chance to play again as a professional player, which is my dream," he told Xinhua.

Refugee's Hope, which was created upon an initiative of "Earth" NGO under the auspices of UEFA, started building its roster last November.

An open call for players in all the camps of the area, where "Earth" had already set up soccer academies for children, yielded a total of 55 players, out of which 24 made it to the final selection.

With an average age of 22 years and, in many cases, a professional soccer background, the team has already marked significant progress not only in their athletic performance, but also in their morale.

"They finally enjoy some inner peace doing what they love most. They get away from problems and regain a sense of normality, which they had missed so much," Nikos Delagrammatikas, the team's communication manager told Xinhua in a recent interview.

Delagrammatikas said the players now more and more enjoy their training time and smile has been back to their faces.

"Four months ago, one would only see people reluctant to cooperate, although nothing separated them, they just put themselves above the team. Now the picture is totally different," said the manager, who's glad to see the change.

Andreas Sabanis, coach of the team, also praised the team-spirit of his players who are united by their common passion despite their different nationalities.

"Our main goal is to give them joy every day: every Sunday they are looking forward to coming to the games, playing and enjoying themselves," said the coach. 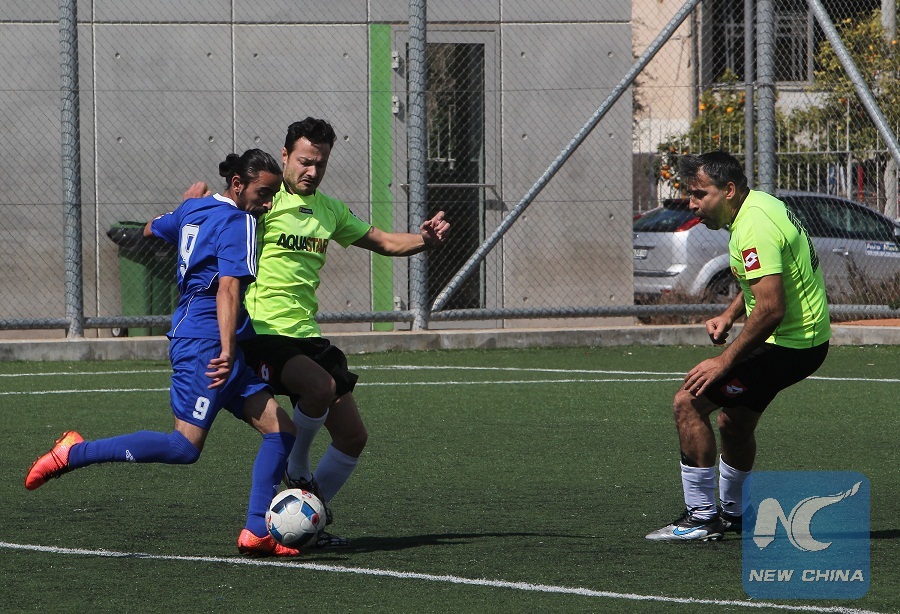 For the time being, the team competes in an employees' soccer championship, but has loftier aspirations.

"Our goal is to move the team up from this amateur league to the third local Piraeus league," Sabanis confirmed.

However, it will take a special exception for that to happen, as according to the regulation, there has to be a minimum number of Greek nationals in every official Greek team.

Wael Saifi came to Greece a year ago all alone with the Netherlands his preferred final destination. Although he passed his first interview successfully two months ago, the relocation process seems to take longer than expected.

But now he's hoping his professional soccer background can give him some help.

"Maybe a scouter will see me playing and get me transferred to another team, maybe this is my chance for a better future," he said.

Hosefa Hag Dibo, 23, is a fellow countryman of Wael Saifi and shares with his teammate a similar background of uprooting from their everyday lives back home, Syria.

Hag Dibo was a devoted sports enthusiast, practicing at the same time soccer, basketball and volleyball, but was thrown into a sudden halt due to the war.

But thanks to Refugee's Hope, he can be in loved cause again.

"This is my dream and I want to continue my dreams. Here, in Greece, or in another country, I don't care," he said.

Hag Dibo, Wael Saifi and their 22 teammates are among the 62,000 refugees stranded in Greece after the implementation of the EU-Turkey agreement and the closure of the Balkan Route.

The closure has dampened many refugees with a hope of reaching Europe. But for the teammates of Refugee's Hope, the team's name is the belief held in their minds.

"Our team's name is Refugee's Hope! This is hope. It means we have hope. We have everything in our life," Hag Dibo said with a big smile on his face.