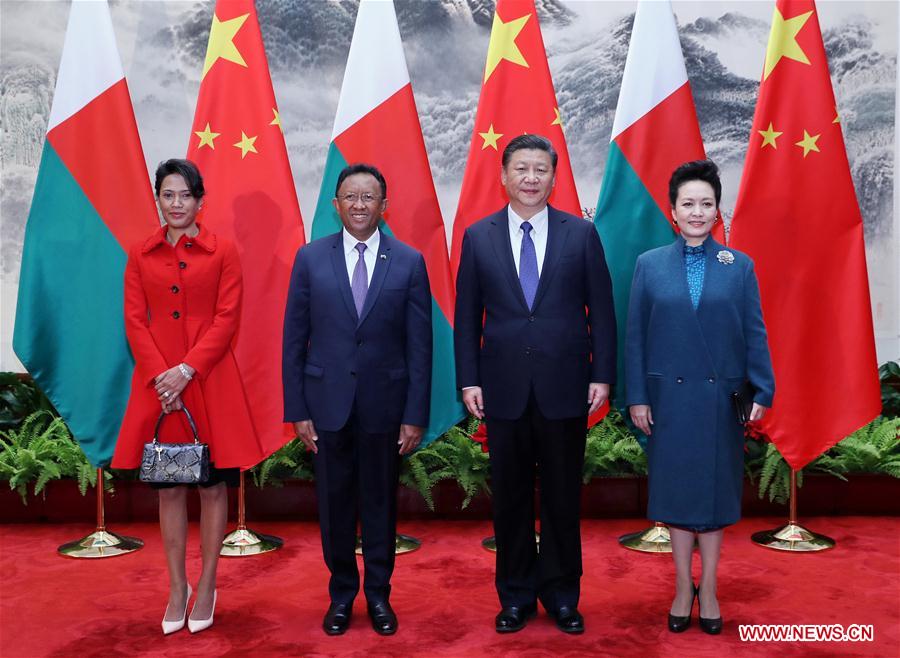 BEIJING, March 27 (Xinhua) -- China and Madagascar on Monday agreed to synergize development strategies under the framework of the Belt and Road Initiative and ten major plans for China-Africa cooperation.

The pledge came out of the talks between Chinese President Xi Jinping and President of Madagascar Hery Rajaonarimampianina in Beijing.

He said China supports Madagascar in playing its role as a bridge between the Belt and Road and the African continent.

China is ready to establish a comprehensive partnership of cooperation with Madagascar, said Xi, calling on the two sides to deepen cooperation in agriculture, fisheries, people-to-people exchanges, security, police affairs, justice and law-enforcement.

China supports Madagascar to play a bigger role in international and regional affairs, and is willing to enhance communication and coordination with the country on climate change, the UN 2030 Agenda on Sustainable Development as well as peace and security of Africa.

Xi said China will comprehensively implement the results of the Forum on China-Africa Cooperation in December 2015, held in South Africa's Johannesburg, to achieve common development with Africa.

Rajaonarimampianina said he was delighted to visit China as the two nations were celebrating the 45th anniversary of the establishment of ties.

Madagascar supports the Belt and Road Initiative and is willing to beef up cooperation with China in energy, aviation, transportation, ports and airport construction, he said.

After the talks, the two leaders witnessed the signing of a number of cooperative documents, including a memorandum of understanding on jointly advancing the Belt and Road Initiative.