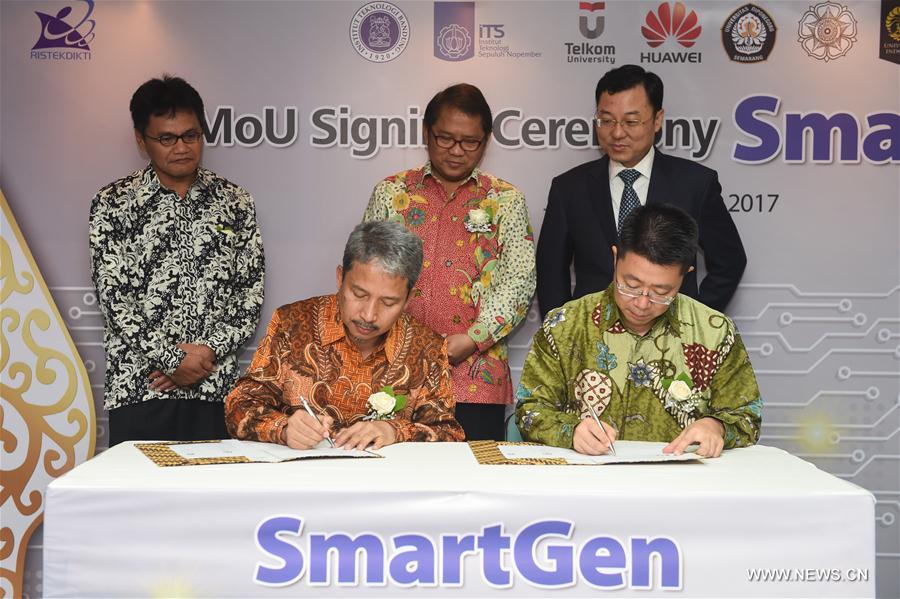 The launching of the program, called SmartGen, was officiated in Memorandum of Understanding (MoU) documents between executive of Huawei Indonesian branch and senior representatives of the state-run colleges, witnessed by Chinese Ambassador to Indonesia Xie Feng.

"Through the SmartGen program, young generation can have access to the latest ICT technology, be the strong force to develop Indonesian economy and increase the nation's competitiveness in the future," Huawei Indonesia CEO Liu Haosheng said in his remarks in the event.

Application of SmartGen program in these colleges would comprise of Tech Day, Huawei Experience Day, Smart Campus Consultancy, Seeds for the Future and Students Internship, according to Haosheng.

Part of the program applications would allow Indonesian students to undertake vocational trainings in Beijing and Huawei headquarters in Shenzhen.

Huawei has went through more than 16 years of operation in Indonesia, extensively taking part in Indonesia's ICT development by establishing a Joint Innovation Center and training laboratories in collaborations with the nation's Informatics and Information Ministry (Kominfo) and national campuses, Haosheng added.

"It's my hope and belief that more and more Chinese enterprises will follow the example of Huawei by bringing their best products and services to Indonesia, earnestly fulfilling their corporate social responsibility, striving to be a good corporate citizen and making greater contribution to Indonesia's economic and social progress," the ambassador said.

He added that China now is Indonesia's largest trading partner for 6 consecutive years and investment from Chinese mainland has increased by a staggering of 324 percent to reach 2.7 billion dollars, raising China from the 9th to the 3rd largest foreign investor in Indonesia.

Indonesian Informatics and Communications Minister Rudiantara said that ICT development is essential in Indonesia at present as the country is pursuing digital technology-supported economy in the future by developing e-commerce basis operation in most of daily life aspects with 180 billion dollar worth of transactions were expected by 2020.

"There will be 2,000 students tasked to hone up ICT skills in the country and in foreign countries as well, including in China. This is part of our efforts to catch up with digital technology," the minister said to address the event held in Indonesia technology and research bureau premises.

He added that his ministry is now tasked to assure ICT becomes the main driver and enabler of the nation's economy development and social culture transformer agent.

To pursue the aim in applying digital economy, Indonesia now faces several challenges that need to be addressed accordingly.

Those challenges were small number of talents, funding, taxation, customer education and logistics.