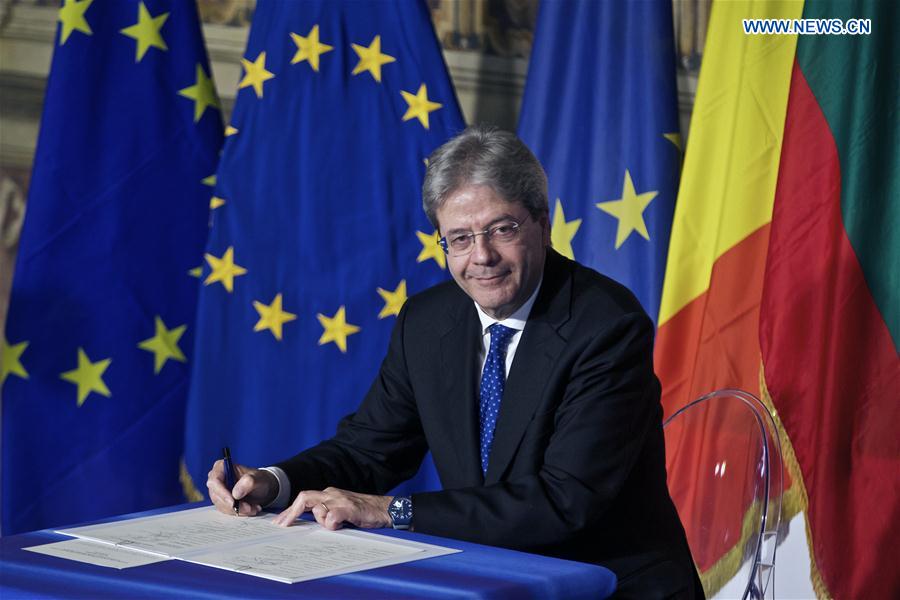 Italian Prime Minister Paolo Gentiloni signs the "Declaration of Rome" during a ceremony at Capitoline Hill in Rome, Italy, on March 25, 2017. European Union (EU) leaders on Saturday marked the 60th anniversary of the Treaty of Rome founding the integration process, with a major ceremony in the Italian capital. (Xinhua/Jin Yu)

ROME, March 25 (Xinhua) -- European Union (EU) leaders on Saturday marked the 60th anniversary of the Treaty of Rome founding the integration process, with a major ceremony in the Italian capital.

The heads of state and government of 27 member states, and top EU officials, were welcomed by Italian Prime Minister Paolo Gentiloni and Rome mayor Virginia Raggi at the Capitoline Hill, where the Treaty of Rome was signed on March 25, 1957.

The summit was meant as both a commemorative event and a "decisive moment" for the EU, given Britain's unprecedented decision to leave the Union and other major challenges facing the bloc.

"Today, we celebrate the perseverance and the cleverness of EU's founding fathers, which has its best proof in this crowded hall," Gentiloni said in his opening speech in the very place where the Treaty of Rome was signed 60 years ago.

"We were six in 1957, and now we are 27," he added, referring to leaders of the six founding member states, namely Italy, France, West Germany, Belgium, the Netherlands and Luxembourg, who witnessed the birth of the Treaty of Rome.

The Treaty established the European Economic Community (EEC), which paved the way for the later European Union.

In his address, Gentiloni also recalled many achievements of the European integration project, while acknowledging that EU has found itself unprepared and responded late before major recent challenges such as migration, economic crisis, and unemployment among others.

"This has triggered a rejection in segments of the public opinion, and rekindled nationalist forces that we thought were buried in the past," he stressed.

He added the trust of EU citizens would need to be restored by stimulating growth, tackling social inequalities, and reaffirming common European values.

According to President of the European Council Donald Tusk, unity only would ensure the bloc's survival as a political entity. "Either Europe will be united, or it will not be at all," Tusk remarked at the ceremony.

All 27 leaders later signed the "Declaration of Rome" meant to revive the fundamental principles of EU's integration, and outline its future perspectives.

Previous objections from Poland and Greece on the blueprint -- about the idea of a multi-speed Europe and EU's austerity policies, respectively -- were lifted ahead of the ceremony.

President of the European Commission Jean-Claude Juncker expressed confidence in the bloc's ability to overcome difficulties.

"As much as they are daunting, today's challenges are not at all comparable to those faced by our founding fathers," Junker said, referring to the fact that Europe's integration process stemmed from the huge destruction of the World War II.

Saturday's celebrations took place amid strict security measures, and some 5,000 police officers were deployed across the city. The alert had been raised since Friday, due to both the EU summit and the terror attack in London on March 22.